Actual Nazis, carrying actual nazi flags, interrupt Holocaust Memorial Event – and no one is talking about it.

They were chanting "6 million more." We can't just keep ignoring this. 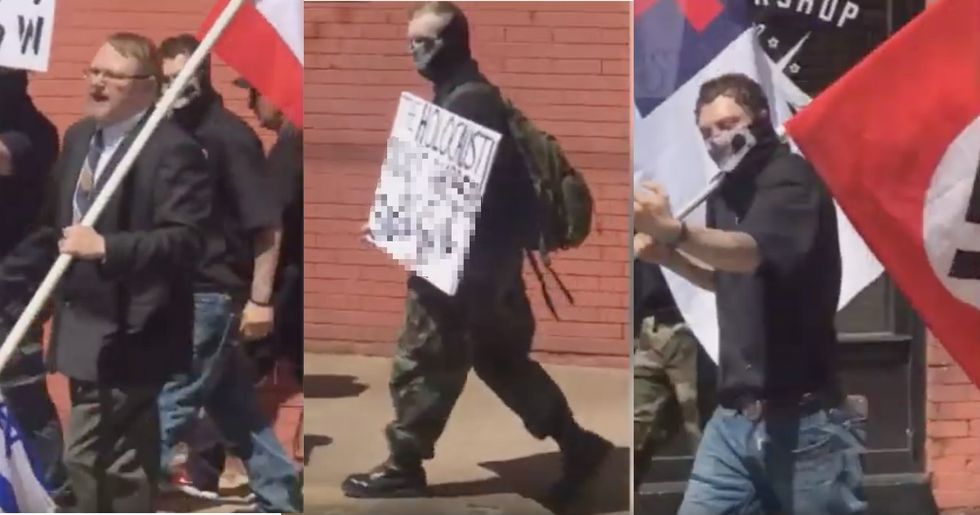 Holocaust Remembrance Day isn’t just to remember those who died, but it serves as a reminder to be forever vigilant to be sure it never happens again.

Unfortunately, we’re in a time and place of our national discourse where we must also be reminded to call out the very real Nazis that are somehow still amongst us.

Every year, Joyce Griffis commemorates the event by organizing a Holocaust Remembrance Day gathering in Russellville, Arkansas. This year it was interrupted by a small group of white supremacists who shouted anti-Semitic slurs including, “six million more” from behind a police barricade.

It’s not the first time we’ve seen white supremacists emerge from the shadows but it’s almost like we as a culture and our ever-attention-starved news media have become desensitized to the fact that a group emulating the darkest ideology in our world’s history has somehow found new footing, and even grown, in 2019.

The neo-Nazis also interrupted a speech given by Sir Beryl Wolfson, a 96-year-old World War II veteran, who witnessed the liberation of the concentration camps first-hand.

“Never forget, because it could happen again, and I’m trying to get this out to the people so it won’t happen again in any place,” Wolfson told 5 News Online.

The group was organized by Billy Roper and his group Shield Wall Network. Roper is recognized by the Southern Poverty Law Center as a neo-Nazi who was born into a skinhead family. Roper organized an anti-Muslim march in 2017 for ACT! For America, a group with ties to the Trump Administration.

Roper and his goons also heckled an Arkansas Tech University (ATU) professor who spoke at the event. The neo-Nazis were there to support deceased ATU professor Dr. Michael Link who expressed anti-Semitic views. Jewish rights group have voiced their concerns over a scholarship established in Link’s name.

But she still showed grace in the face of hate. “We will accept you if you accept us. We want you to have your life, but we want our life also, and we want the truth to be known about history,” she said.

While the neo-Nazis protest of a Holocaust remembrance is disturbing, to say the least, on a macro level, their presence shows why these events are so important. We should never forget these atrocities and those who committed them or else we are bound to let them happen again. In this day and age of growing right-wing authoritarianism both at home and abroad, the message has never been so important.