Fear and the Gun Lobby

If urban minorities and immigrants clamored for guns in the same way rural, white males do, would gun control be more popular? 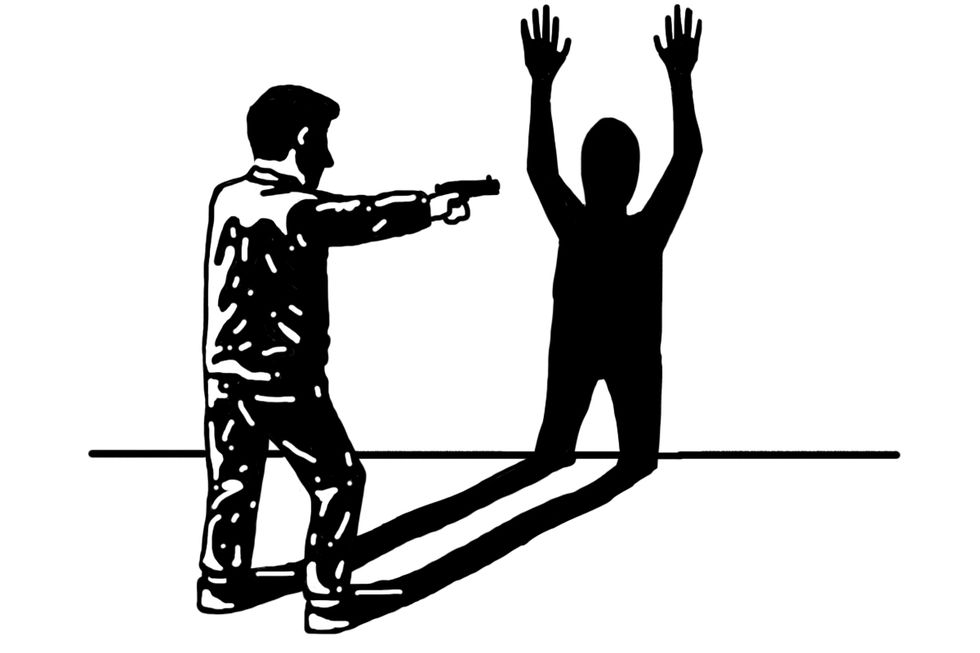 With the dizzying stream of headlines detailing law enforcement slayings of black and brown citizens, most recently exemplified by the Department of Justice’s damning report on the Ferguson Police Department’s racist culture, it seems that the other end of the spectrum, white vigilante “justice” has faded into the background. Victims of civilians taking the law, and human lives, into their own hands—Jordan Davis, Renisha McBride, Trayvon Martin, and others—live on as reminders of how devastating both toxic fear and little gun control can be. Yes, our police on overdrive are symptomatic of a violent, gun-obsessed culture. Yet, as a black male, I have as much reason to fret over being shot dead just for walking on someone’s porch to ask for help, like Renisha McBride did, as I do getting the wrong cop on a routine traffic stop.

The common American delusion that a gun is the key to safety in an inherently unsafe world (despite all signs pointing to a decrease in violent crime), is not only fallacious; it’s dangerous. When NRA executive vice president Wayne LaPierre said the only way to stop a bad guy with a gun is a good guy with a gun (in response to the Sandy Hook shootings), one can’t help but consider who gets to determine who is good and who is bad in his scenario. Surely if urban blacks, or Arab Muslims for that matter, started clamoring for guns in the same manner as rural, white men, there’d be great outcry and antagonism in Gun Nation.

And yet, when an armed white man shoots a person of color dead, as Craig Stephen Hicks did in mid-February when he murdered neighbors Deah Barakat, his wife Yusor Mohammad Abu-Salha, and her sister Razan Mohammad Abu-Salha execution-style, the official narrative almost never questions the intersection of a weaponized culture and institutional racism. Hicks had 12 guns, and his views on religion, particularly on the Muslim faith that his victims observed, are well known by now. Nevertheless he was mainly cast as a “lone wolf” angry over a “parking dispute.” Having found ourselves on the wrong side of white fear and living to tell about it, be it as a victim of a hate crime or of the frequent micro-aggressions we must trudge through in our daily lives, those of us on the so-called margins know that the carefully honed narrative of a guy upset over a parking space, upset enough to take three young lives, is total bullshit.

Sadly, inaction on the gun problem affects us all. As has been demonstrated all too frequently across the country, the reality is that Americans of all races, colors, and creeds have a reasonable expectation of being touched, profoundly and permanently, by this inane type of violence. Not unlike with the subject of race, a “dialogue” opens every time someone walks into a presumably safe space and opens fire. Yet there is even more resistance from the gun crowd to an honest discussion on how out of control and dangerous our gun culture is than there often is to, say, one on white supremacy’s impact on black lives or hate crimes against Muslims.

Be it a rampage in a high school in Colorado, an Arizona congresswoman getting shot in the forehead during a speaking engagement, a small child accidentally killing himself with an Uzi while on a gun range, or the Sandy Hook nightmare, where 20 white schoolchildren, our most infallible symbol of American innocence, were cut down by a gunman’s Bushmaster assault rifle, there is seemingly no incident horrifying or bleak enough that warrants a true dialogue, let alone legislation, in the minds of Gun Nation. This is in no small part due to the python-like squeeze the NRA has on Congress. The same way the dialogue on race can be shut down by the need to maintain white dominance, the needed dialogue on gun control, something so obvious to a great many of us, is willfully silenced by one of the nation’s most powerful lobbying organizations.

Politicized in response to Lyndon B. Johnson’s gun control measures following the political assassinations of the 1960s, the NRA has consistently fed the beast that keeps ours a gun culture, reliant on fear of our own government and ultimately of each other for its very survival. And though the organization does not release official demographics of its membership, #NRASoWhite could easily be a hashtag on Twitter. The NRA and its ilk like to hoot and holler about American Exceptionalism. Yet, the intersection of white male persecution complex, the mentally ill falling through the crevasses in our healthcare system, and a false correlation between more guns and increased safety truly makes us exceptional in the regard that no other large, developed nation experiences as many homicides-by-gun as we do.

That “Stand Your Ground” laws exist and work to the advantage of white males who kill black people simply because they feel threatened, is a no-brainer. In my mind, there is no question who the “Your” in “Stand Your Ground” pertains to. Just like there’s no doubt as to who’s being described as “All People” in the Declaration Of Independence. The cis-hetero white male, whose life is set on the easiest difficulty setting, has protections to make an already rigged game even easier, at the expense, of course, of the rest of us.

When Wayne LaPierre repeatedly declared in the wake of Sandy Hook: “This has nothing to do with guns, it has everything to do with freedom,” he sure as shit doesn’t mean my freedom, and certainly not that of the slain children. And nice try, NRA, suggesting that American gun control laws are racist in origin, maybe it would be more convincing if your organization addressed the post-bellum measures that the NRA itself helped to implement to keep blacks from owning firearms. To the group branding the second amendment as “America’s First Freedom,” my vote for that title still goes to the First Amendment, but whatever.

Members of hate groups like the KKK, whose lynching campaigns were self-described as a Christian crusade, are easy for our society to write off as fanatics. We are less eager, however, to view those with stockpiles of ammo and guns as more than just lone actors, but rather, as members of a population that is scared of its own shadow. Those who live by the gun in America are not self-radicalized. They are radicalized by a system that empowers them, placing them and their lives above this country’s many “others.”

As much as gun culture relies on the fear of the unknown in the form of terrorist groups like ISIS, it also feeds on the fear of blacks as being superhuman, as Darren Wilson tried to argue in defense of his shooting of Mike Brown, and as white citizens in the Deep South tried to argue decades before in the form of the “negro cocaine fiend" hypothesis. In the so-called patriot’s pursuit of freedom and sovereignty and love of country, there is a gross deficit of love for those who do not fit the mold of their decrepit vision of what America should be. The gun being a symbol of freedom is not a new idea, but with a black president, white America’s fear of governmental tyranny (read: because President Obama “goes for the guns”) has led to a marked increase in gun and ammo sales. I don’t believe in coincidences. And while those who claim an almost divine right to gun ownership stump for the right to bear arms, many of us are still fighting for the right to exist in peace, living under the yoke of biased police and suspicious neighbors with their fingers hovering over the trigger, blinded by fear masquerading as righteousness.