Facebook users are incredibly confident and incredibly wrong about how many triangles are in this sketch. 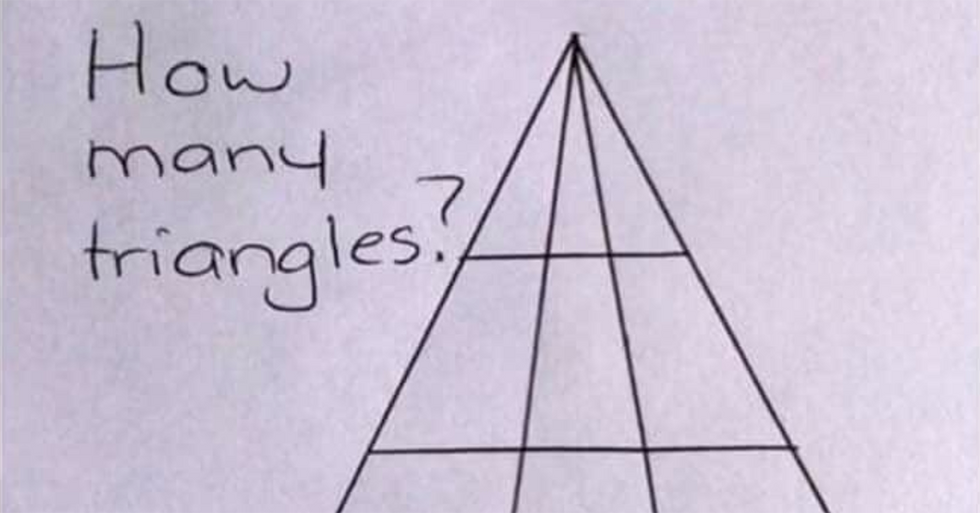 Anyone who has experienced, well, anything on social media has likely realized a phenomenon in which people’s enthusiasm and confidence in a matter far outweighs their ability or success. The entire concept of fake news adheres to the philosophy that people will ignore the truth to bolster their self-image or own beliefs.

While the drawing below (probably) won’t skew any presidential elections, it does serve as yet another example of people haphazardly placing a lot of confidence in a conclusion that isn’t a little bit right.

A Twitter user with the curious handle Thomas Violence was apparently nursing a hangover by reveling in the bad conclusions drawn by Facebook users tasked with figuring out how many triangles are in the sketch below.

curing my hangover by taking pleasure in the absurd confidence with which people are wrongly answering this Faceboo… https://t.co/HweLFAeWw9
— thomas violence (@thomas violence) 1523155516.0

As you can see from the disconcerting variety of answers, the original post may have just as well asked people to list a random number between 5 and 30.

“25 if you count the word triangle.” Andrew may be, all at once, overthinking and underthinking the problem at hand.

Meanwhile, Thomas Violence found that people on Twitter were submitting their best guesses to him for reasons not entirely clear, save for everyone’s love of a good brain teaser.

a lot of strangers are replying to this with their guess at the number of triangles. i do not know what you want me… https://t.co/6nH1tvfhZT
— thomas violence (@thomas violence) 1523166574.0

It didn’t take long for the religious right, or at least a parody thereof, to chime in with their technological contribution.

I suppose we should mark that down as “one.” “One triangle” is that person’s guess.

As for a thoughtful and correct answer, somehow one emerged from the flaming wreckage that is this crowdsourced query.

But even this seemingly sound response was tempered by the fact that it seemed easier to print and outline 18 images than it would be to convince Twitter of a formula that led her to this conclusion.

That may be the most insightful takeaway from this entire exercise, which is saying something because 18 is actually the correct answer, not just the one that people agree on.