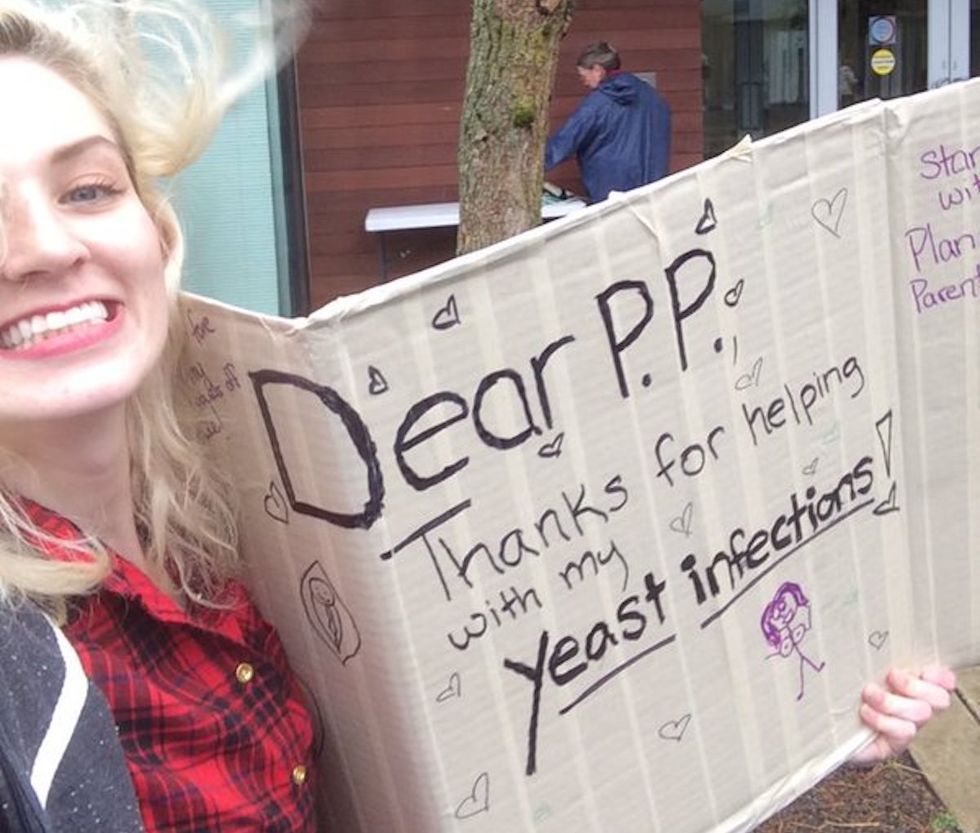 The Planned Parenthood organ harvesting conspiracy parroted by the likes of Carly Fiorina—who claimed the organization was selling the “brains and other body parts” of aborted fetuses—has fueled anti-Planned Parenthood anger from the more riotous wings of the nation’s conservative constituency. The organization has faced threats of defunding by Congress and some hateful protests at their clinic locations. When one Portland, Oregon, woman saw such a protest gathering at her local Planned Parenthood branch, she clocked out of work and made her own protest sign. “Dear PP,” Mary Numair scrawled on a cardboard box, “Thanks for helping me with my yeast infections!”

She then joined the protesters, standing alongside a woman who carried a sign reading “Abortion Kills Children!” and began chanting “Yeast infections! Yeast infections!” Numair told Slate that Planned Parenthood had assisted her with recurrent yeast infections she had when she was younger and didn’t have health insurance.

“They’re also the ones who so graciously informed me, after I freaked out after losing my virginity, that I had a latex allergy and there was no reason to panic,” she said to Slate. “They do so much beyond abortions. I’m very much pro-choice, but if you want to take it beyond pro-choice and pro-life, there are … all these other things that are uncomfortable to talk about and [get treated if] you don’t want to wait two weeks to see your primary doctor or you don’t have health insurance.”

Within half an hour, Numair’s enthusiastic chants and “cheerleader-like” kicks eventually drove the anti-Planned Parenthood protesters away. She posted a selfie of herself beaming and carrying the sign on Twitter. “Hey I just single handedly broke up a planned parenthood protest by chanting the words ‘yeast infections,’” she wrote. The tweet has garnered thousands of retweets.