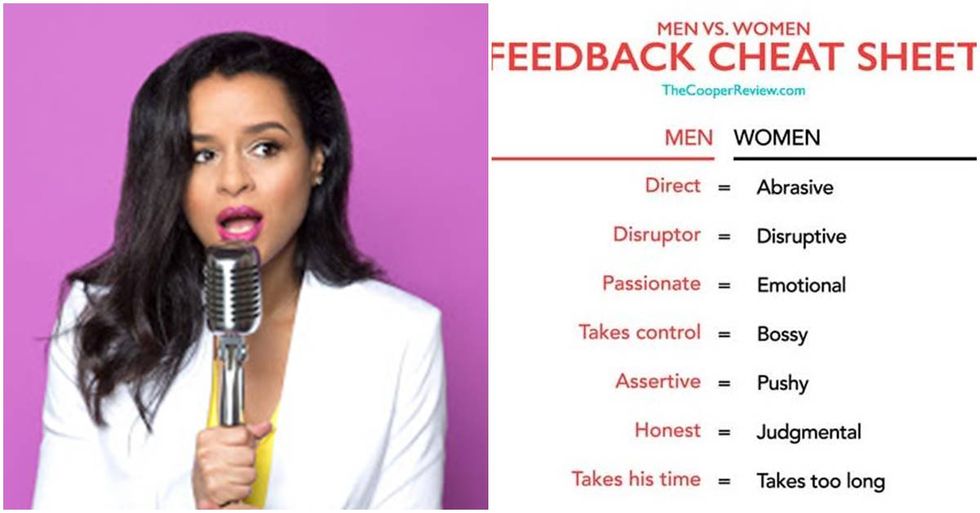 It’s 2017, and women are still subject to ridiculous double standards when it comes to office behavior. In a professional culture where men are praised for being assertive, women are routinely labeled “bossy,” “overbearing,” or, worse, “bitch” for the same behavior. This forces many women into a no-win scenario where they can easily fall victim to self-defeating behaviors by either becoming too passive or too controlling.

Comedian Sarah Cooper knows a thing or two about being a female in a male-dominated industry. She’s a former manager at Google who now satirizes corporate culture at her blog, The Cooper Review. Recently, Cooper created a hilarious “Men vs. Women Feedback Cheat Sheet” that exposes the double standards women face in the corporate world, and GOOD just had to share it. We also got the chance to ask her a few questions about her blog and the difficulties women face in the corporate world.

Have you ever been labeled “abrasive” or “bossy” by a supervisor?

No, sadly, I’m a big people-pleaser and was always worried about being perceived negatively when I worked in the corporate world, so I never received this feedback. Sometimes I’d get feedback that I needed to be more sensitive, because I liked making a lot of jokes at work and people who take their jobs very seriously didn’t like that.

Can you recall any times when you or a female coworker has received sexist feedback?

Yes, I saw female coworkers receive feedback for behavior that was acceptable for men, and it was frustrating. One coworker in particular was very passionate about her work and wanted to be involved in everything and had a lot of ideas, which I thought was great, but others saw as being a negative trait.

Do you think women should change their behavior in the office so they don’t appear “bossy” or “emotional”? Or does that only help promote patriarchy?

I think women should actively work to stop censoring themselves and changing how they speak. I think this is the only way that it becomes more common and accepted for women to speak and act the same way men do in the workplace. But I also think it’s important for women to not feel like there’s any one way to be or any one way to succeed. As one example, you may just feel more comfortable smiling, so smile! But if you don’t like smiling, you shouldn’t have to force it.

What do women in the tech industry tell each other that men never hear?

I think a lot of women and people of color are scared of being seen as complainers and want to focus on the work, so oftentimes if something sexist or racist happens, they share it amongst themselves and try to avoid complaining about it.

You also have a piece, “9-Non-Threatening Leadership Strategies for Women,” that satirically teaches women how to avoid threatening the male ego. Are women stuck in a binary position of either being labeled threatening or passive? Is there a third way?

The non-threatening leadership strategies is more a satire about what we already do to avoid being labeled as threatening, and definitely not real advice! I don’t think women are stuck being labeled. The more women there are in the workforce, the more attitudes and opinions change, and the more acceptable it becomes for women to not force themselves to behave in a certain way.

You also criticize the tech industry for its lack of diversity. Do you have any hope this will change?

I think it’s already starting to change. I think it’s important for companies to keep pushing forward with their initiatives and let people see how they are helping, but also be open to changing policies if they aren’t working. The thing that gives me hope is that it does seem to be a priority for a lot of tech companies.