“This is how you make moves man, make it happen” 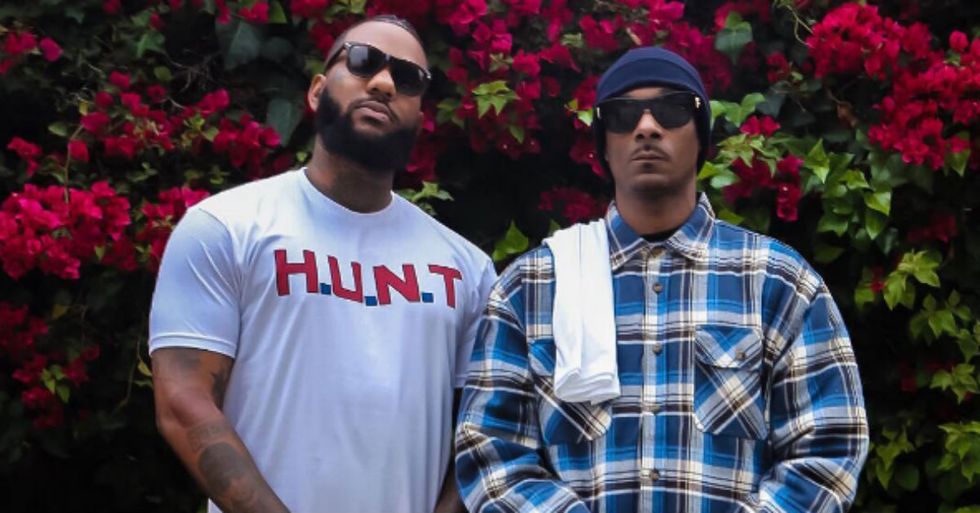 On Friday, Snoop Dogg and The Game, rappers and Los Angeles natives both, led a march to the Los Angeles Police Department’s doorstep, to show they have had enough.

At 6:30 a.m. local time, The Game posted to Instagram saying, “make the Californian & it’s (sic) law branches aware that from today forward, we will be UNIFIED as minorities and we will no longer allow them to hunt us or be hunted by us.”

In his post he implored his followers to not “bring any weapons or anything illegal. Do not come high or belligerent.. We don't need any HOT HEADS or anyone there for the wrong reasons...We will stand as we are, UNIFIED. I'm calling ALL GANGS, ALL RACES, ALL GROWN MEN affiliated or not & WE WILL STAND UNIFIED tomorrow.”

An hour later, The Game posted another Instagram showing the estimated 100 men who heeded the call.

In the video, viewers can hear Snoop and The Game say over and over again that they come in peace.

The march also happened to coincide with the LAPD’s graduation of nearly 40 new officers. The point of the march and its hopeful resolution was to open a communication channel with new recruits before they hit the streets, according to Snoop.

“Going to get some dialog with the LAPD, the new recruits, the graduating class of 2016,” Snoop says in the video adding, “this is how you make moves man, make it happen. Get some dialog, some understanding with the new recruits before they hit the streets so they know we are just like them, trying to live and go home and get some understanding. We advise you to do the same. Follow protocol.”

Their message was strong and clear: No more violence on either side. No more shooting, no more killing. The only thing that will solve this, according to the two rap superstars, is an open and clear dialog between the police and the public on how we can fix this together.

It appears the police, at least in Los Angeles, are ready to meet the men half way. During the LAPD’s graduation ceremony, Police Chief Charlie Beck said:

Beyond their own peaceful protest, both Snoop and The Game are encouraging other entertainers to follow suit and use their voices for good. As The Game said in a post Thursday night, he hopes his message, “...spreads across our nation & other rappers, athletes, entertainers & people with money, resources & a platform show face & do more than just POST on social media so we can show the world that when in conflict, we can be UNIFIED as a human race & remain UNITED to decrease the senseless murders & violence across the board on both sides."

One other artist who heard this message loud and clear is Jay Z, who dropped his first new music since 2013 with a song titled “Spiritual” on Thursday night.

The song, according to Jay Z, was created some time ago. In part, Jay Z says, “Punch (TDE) told me I should drop it when Mike Brown died, sadly I told him, ‘this issue will always be relevant.’”

Just a boy from the hood that

got my hands in the air in despair don’t shoot

I just wanna do good, ah

Listen to the entire song below.