The Swedish Peace and Arbitration Society’s gyrating mascot shakes his booty at fascism off the coast of Stockholm. 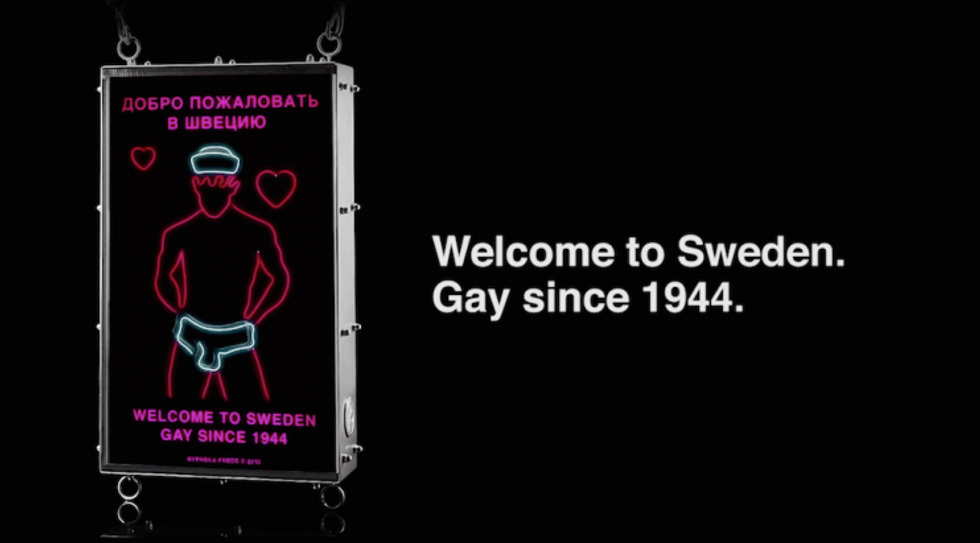 Russia, as a country, is not exactly “queer-friendly.” Over the last few years, they’ve made the promotion of “gay propaganda” to minors a jail-able offence, have tried to prevent the adoption of Russian children to families living in countries where same-sex marriage is legal, and, on a tangential note, even unofficially banned twerking. This has inflamed the global community, which has tried everything from boycotts to high profile protests to draw attention to these injustices. Sweden, however, has decided to take definitive action. Recently, Swedish activists, after a series of “unwanted navel intrusions from Russia” that alarmed the relatively peaceful Nordic country, decided to fight Russian fascism with their own unique brand of soft power. The activists, working on behalf of an organization called The Swedish Peace and Arbitration Society (SPAS), have created and installed electric underwater signs off the coast of Stockholm that feature a dancing (gyrating) sailor in his underwear, with words in both Russian and English that say “Welcome to Sweden: Gay since 1944.” The sign is in reference to the year Sweden legalized homosexuality, and became one of the first countries to do so openly. Humorously, the sign also sends out Morse code signals that declare “this way if you are gay.”

In addition to trolling Russian subs, SPAS is dedicated to disarmament and democratization, and created The Singing Sailor campaign after alarming reports that Russian submarines had been spotted in Swedish waters, putting the national military on high alert. “If there is a submarine down there and there is a crew member who hears or sees the sailor, they are welcome to join us in the Pride Parade on 1 August in Stockholm,” Daniel Holking, head of SPAS’s fundraising and communications, recently stated.

Check out the full, booty-shaking video below: