Can the Art of Eating Help Develop Our Taste for Creativity? 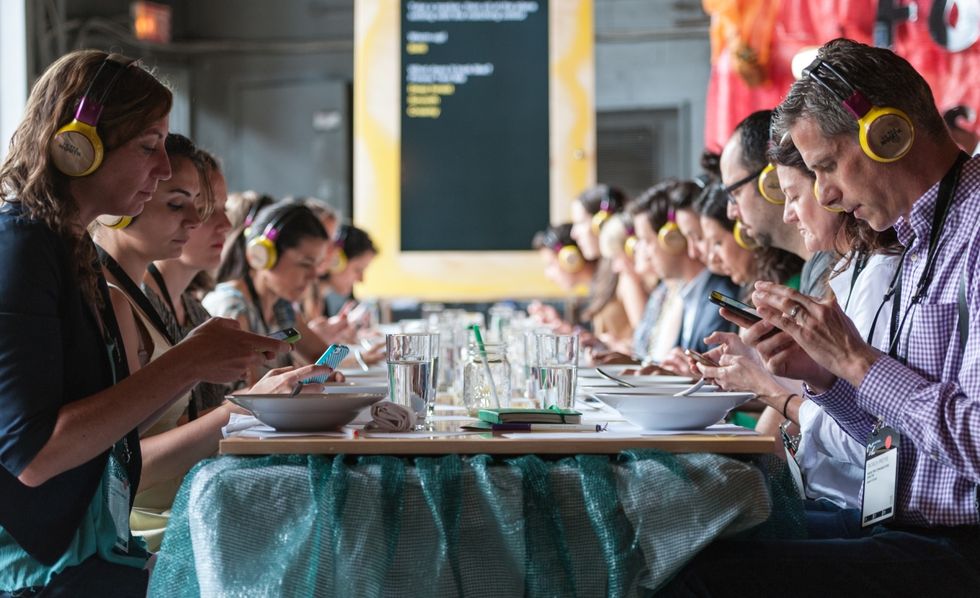 A scene from this year's C2 Montreal Commerce + Creativity, where one of the main themes was food and innovation. Image courtesy of C2 Montreal.

Last week, Montreal, a city known both for its haute French-fusion cuisine and the decadent, gravy-filled side-dish poutine, hosted a multi-media exploration of the taste bud. This year’s C2 Montreal conference, a yearly creative event run by Cirque du Soleil that’s been described by some as “TED Talks with trapezes,” prominently featured food as one of the main themes. Events ranged from a series of workshops held by Keurig that explored smart appliances and even smarter small-business solutions, to start-up founder and farmer Sean McDonald espousing the virtues of crickets (both for livestock and human consumption). There was also the C2 Lab: Food Challenges, which included eating memory-activating popsicles, as well as experiments with virtual reality, suspension nets, and fog boxes, and the unfortunately titled “In The Mouth”—a curious series of workshops that let participants eat their way “inside the mind of a chef with a mixed-up sense of taste” via edible and audible experiments.

One of our favorite food-related events, however, was a lecture by Dutch “eating designer” Marije Vogelzang, an artist, author, teacher, and one of Fast Co’s ‘Most Creative People.’ Vogelzang creates truly singular “food experiences” for galleries, brands, and educational purposes, and in the past has worked on projects ranging from a fake Christmas dinner featuring tablecloth harnesses, to an Italian Futurist-inspired “Pasta Sauna,” where visitors could sample fresh carbs while they got their steam on.

Vogelzang presents at C2 Montreal to a riveted crowd.

For C2 Montreal, Vogelzang spoke about her White Funeral Meal project, a mono-color faux-wake meant to evoke joy rather than dour sadness. While black is the most recognizable color associated with bereavement in the West, in countries like China white is actually used to represent the wholeness of death, and returning back to the universe. While the artist’s work with sense and memory might hint at an exploration of neurological functions and softer sciences, she’s loath to connect her practice to these fields. “Out of respect for science I would never say I'm a scientist,” Vogelzang playfully told us backstage. “I see myself as a designer, somewhere in the middle of art and science. What I try to show is that creative thinking, especially in food, can bring about [valuable] new ideas and solutions.”

Though Vogelzang’s work isn’t overtly political, in this era of income disparity, scarcity of resources, and even massive droughts, the topic of “food” is much more loaded than it was even a generation ago. As Vogelzang told us, “when you work with food you are intrinsically dealing with certain [loaded] issues.” By applying creativity and a common denominator, like taste and desire for community, you make these topics more palatable and open for discussion. For example, with her “Dutch National Tapwater Tasting” project, the artist acquired and bottled samples from the 12 Dutch province capitals for a genuine taste test. Each sample had a noticeably different flavor, much like the slight deviations in wines between regions in Europe. The performance piece was a humorous attempt to illuminate Dutch citizens on this often under-appreciated resource, which is sadly a scarce luxury in many parts of the world. Vogelzang’s piece also highlighted how a fresh glass of water is just as valuable, and delicious, as say, a well-aged merlot.

The artist’s 2007 water-testing event in Tilburg was one of her most popular projects.

”Unlike western society, in many cultures the color white symbolizes death,” explains Vogelzang. “This meal consists entirely of white food and especially designed white crockery. In this serene atmosphere, the next of kin can share a meal and their memories.”

Currently, Vogelzang is working to create an experimental eating design program at the Design Academy Eindhoven, her alma mater, which she will chair. She hopes that people will come to recognize the value in eating experiences, both in the traditional sense and as performance art, and think more about what they put into their bodies. “I really hope to spread the word and have people ask ‘Why are we eating a certain way, and what can be different about it.’” Vogelzang uses one very familiar example to highlight this thought: “We do so many things out of habit—like drinking coffee. Coffee is deeply rooted in our being […] but we're not really thinking about where it comes from. How it was transported, who grew it, how much water was used, or what it actually does to our bodies—and is it a good thing or a bad thing?”

Our favorite project from Vogelzang, TEARDROP, was a transparent installation made of 5 klm of rope and a ring of 24 glass pipettes, described as an “exploded view of a tug stall. The ones you find at a fun-fair.” Many of the ropes were connected to pipettes filled with flavor, and had cryptic tags like 'A fly just flew into my mouth', 'I will always be there for you!"

While Vogelzang is realistic about what she can achieve, she believes in the intrinsic value of meaningful thought and experiences surrounding food. “Maybe my installations aren't solving anything, yet,” says Vogelzang. “But I do hope in my presentation people can see what eating design can do.”