If Trump isn’t re-elected, he could be headed straight to prison. 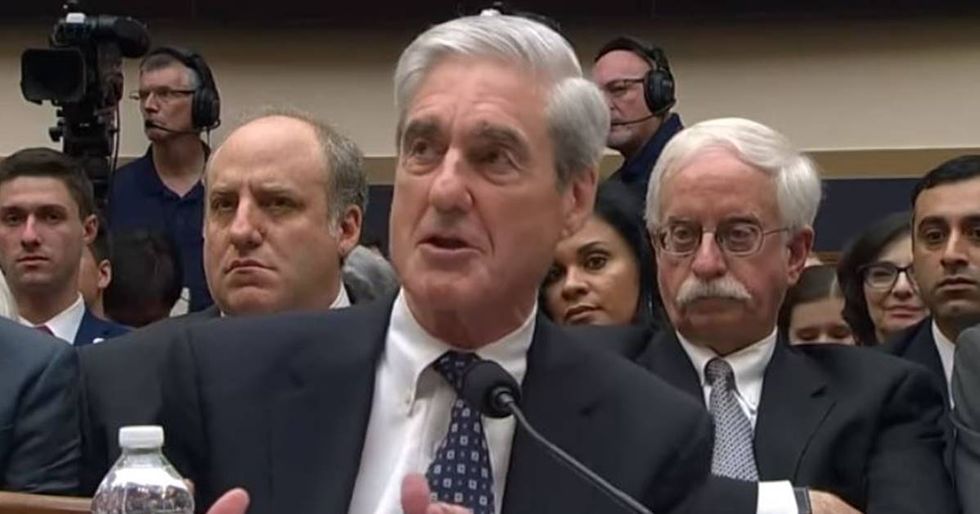 During his testimony before the House Judiciary Committee, Robert Mueller, the former special prosecutor in the investigation into Russian election interference, confirmed that President Trump can face charges after leaving office.

Mueller’s admission came during an exchange with Republican Ken Buck from Colorado.

“Could you charge the president with a crime after he left office?” Buck asked.

Buck asked again, “You believe that he committed … You could charge the President of the United States with obstruction of justice after he left office,” to which Mueller repeated himself saying, “yes.”

One could also extrapolate from Buck’s mangled question that Mueller believes Trump committed a crime. But it’s unclear if Mueller is responding to the first part of Buck’s question where he asked, “You believe that he committed …”

Mueller believes that Trump can not be charged with a crime while in office due to a 2000 Justice Department Office of Legal Counsel (OLC) memo that had concluded, “a sitting President is constitutionally immune from indictment and criminal prosecution.”

Democratic Representative Ted Lieu from California later clarified Mueller’s thinking on whether Trump could be indicted. “The reason, again, that you did not indict Donald Trump is because of the OLC opinion stating that you cannot indict a sitting president, correct?” Lieu asked Mueller.

“That is correct,” Mueller responded.

While Mueller’s report on election interference said that Trump wasn’t involved in a criminal conspiracy with Russia, it detailed ten incidents that could lead him to be charged with obstruction of justice.

During his testimony, Mueller came close to saying he would have indicted the president if it was within his power. “Charging the president with a crime was not an option we could consider,” he told the House committee. “If we had confidence the president clearly did not commit a crime, we would have said so. We did not.”

To put it simply, Mueller and his team were powerless to indict the president and they cannot say with confidence that he is innocent.

When asked by Representative Jerry Nadler of New York if he totally exonerated the president, Mueller replied with a firm “no.”

There is a way that the president can be indicted before his term naturally ends: impeachment.

The House of Representatives can bring articles of impeachment against the president and if approved by a simple majority, the case is brought to the Senate which holds a trial.

The Senate needs a two-thirds majority (67 votes) to find the president guilty and remove him from office.

Then, the president can be held accountable for his actions in the court of law.

If so, the Mueller Report contains convincing evidence that Trump indeed obstructed justice. Mueller writes that his detailed report was intended, in part, to “preserve the evidence” because “a President does not have immunity after he leaves office.”