Mueller's statement on the Russia probe has everyone ready for impeachment proceedings to begin. 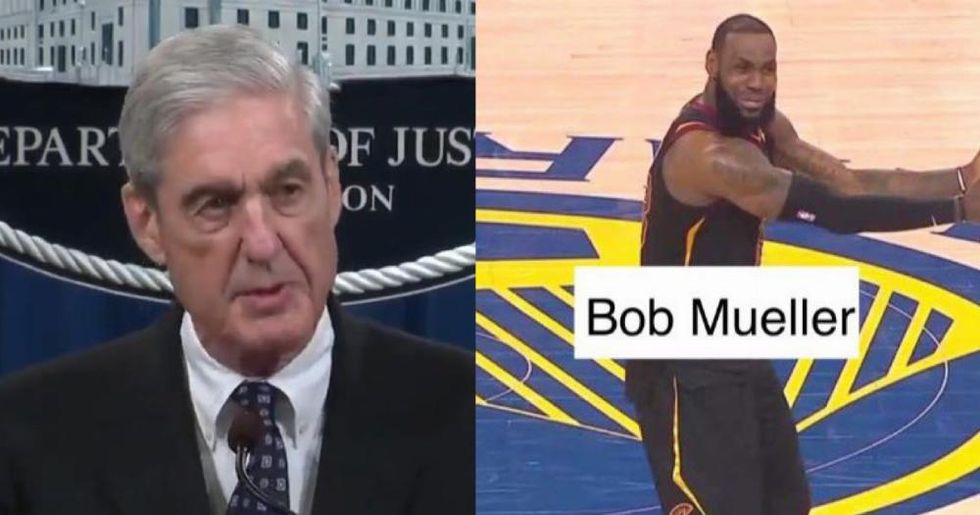 Lo and behold! Sixty-eight days after he delivered his report to the Attorney General, Special Counsel Robert S. Mueller III has emerged from the shadows to introduce the world to what his voice sounds like.

His voice sounds like that of an aggravated professor begging his class to DO THE DAMN READING. Mueller took to the podium to officially resign from his role of special counsel now that the report has been written, and to highlight the conclusions in said report.

The former FBI director stated that Trump is not NOT a criminal, explaining that the only reason why his office didn’t consider charges was because of a longstanding Department of Justice decision that a sitting president can’t be indicted. That’s a far cry from Trump’s (and his handpicked Attorney General with coverups on his resume) insistence that Mueller's report is a “complete and total exoneration.”

Mueller’s statement was almost as damning for House Democrats as it was for the White House. He was keen to note that while the DoJ can’t charge the president with a crime, Congress can, in a process called impeachment.

Impeachment is the remedy to a lawless executive built in by the Founding Fathers, who fought a war against an absolute ruler with no accountability. Mueller was calling on the House to do their damn job and rebuffing their insistence on stalling until he testifies for them. “Any testimony from this office would not go beyond our report...the report is my testimony,” he said.

Mueller leaves no doubt: 1) He didn't exonerate the president because there is evidence he committed crimes. 2) Jus… https://t.co/TtArvGfKAk
— Elizabeth Warren (@Elizabeth Warren) 1559144923.0

As Mueller reiterates there were "multiple, systemic efforts to interfere in our election," Trump calls it a hoax.… https://t.co/u7sKdfMG3w
— Beto O'Rourke (@Beto O'Rourke) 1559146547.0

What Robert Mueller basically did was return an impeachment referral. Now it is up to Congress to hold this preside… https://t.co/Ijx4Epaemw
— Kamala Harris (@Kamala Harris) 1559146103.0

Mueller made clear this morning that his investigation now lays at the feet of Congress. No one is above the law—Co… https://t.co/aitvZ2QJno
— Julián Castro (@Julián Castro) 1559144443.0

JUST IN - @PeteButtigieg to @NBCNews on #Mueller: “This is as close to an impeachment referral as you could get under the circumstances.”
— Josh Lederman (@Josh Lederman) 1559146028.0

AOC — not a presidential candidate until at least 2024 — also had a good tweet.

Trump, for his part, isn’t even pretending to be innocent anymore. The president took to Twitter to gloat that he wasn’t charged, even though Mueller had said that he only wasn’t charged because he is president.

Nothing changes from the Mueller Report. There was insufficient evidence and therefore, in our Country, a person is… https://t.co/LIxEdCTBJd
— Donald J. Trump (@Donald J. Trump) 1559144241.0

What’s more important than the president’s reaction, however, is the memes.

Mueller marriage proposal: "If I had confidence I didn't want to marry you, I would have said so." Mueller birthda… https://t.co/uR2EgGTuro
— Anand Giridharadas (@Anand Giridharadas) 1559144931.0

The ball is in your court, Congress.