Donald Trump, Our Next President, Took Time To Insult Meryl Streep On Twitter

Nice try, Trump, but Streep is anything but “overrated” 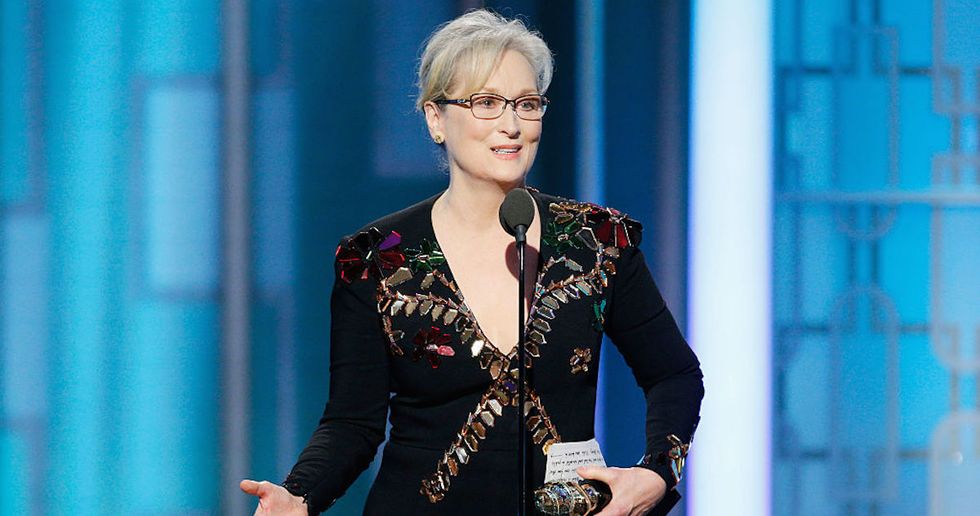 As you may have seen or heard, Meryl Streep gave a powerful speech during the Golden Globes on Sunday night, calling out Donald Trump for mocking a disabled reporter and setting a precedent for disrespect and violence. While accepting the Cecil B. DeMille Award for a career of outstanding artistic contributions, Streep used her time in the spotlight to stun and inspire an audience of millions, encouraging all of us to hold those in power accountable for their actions. While Streep never mentioned his name directly in her speech, Trump—the soon-to-be president of the United States—found reason enough to ridicule the actress in a defensive and juvenile Twitter tirade.

It’s hard to say what is more alarming—the fact that Trump found time to lash out at a well-respected artist or that his social media outbursts have become so predictable to the point of being boring. Had this man-thread been launched a couple years ago (or even a year ago), we’d dismiss it as a D-list, reality show personality whining about an A-list, much-adored artist. But the stark reality that a vitriolic narcissist will soon take the highest office in this country should cause us all to be on high alert.

Thankfully, many Twitter users were quick to point out how blatantly incorrect and dangerous the president-elect’s online behavior truly is, proving we all have a hand in voicing the truth.

The hashtag #ThingsTrumpThinksAreOverrated quickly caught on in the aftermath of his tantrum, further proving the predictability and nonsensical nature of his tweets.

At the end of the day, Meryl Streep has more resonance in a meme than Trump has in all of his tweets combined. Shouldn’t that say something about his presidential fitness?