Trump's tweets from this morning reveal he doesn't understand how phone calls work. Or the Constitution.

He that is without sin among you, let him make the first call. 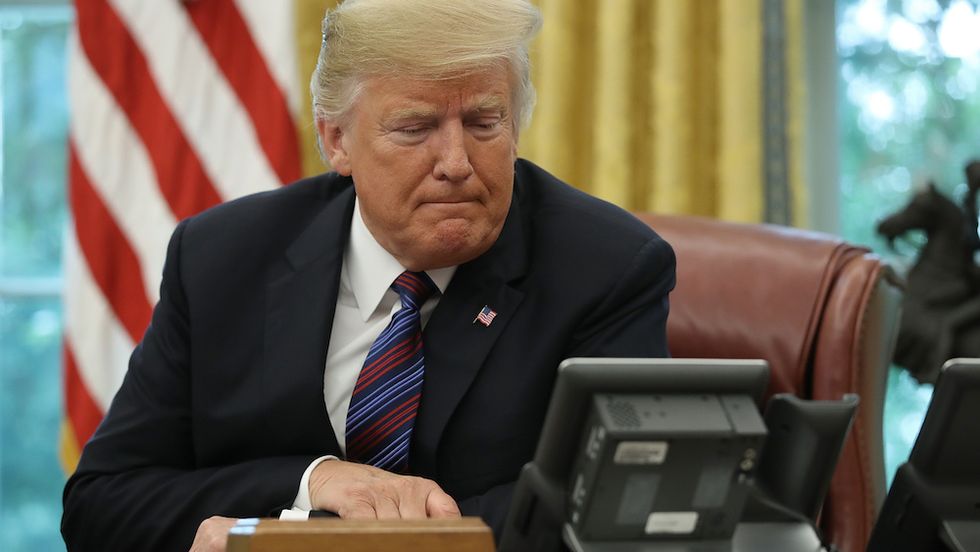 In his morning tweet storm, the President of the United States (Donald Trump, if you've been lucky enough to have forgotten) revealed that he doesn't know how a whole bunch of things work.

He said that if Democrats begin impeachment hearings, he'd go to his handpicked Supreme Court. That's neither how separation of powers nor the impeachment process works.

The Mueller Report, despite being written by Angry Democrats and Trump Haters, and with unlimited money behind it (… https://t.co/P0Xq2h0Boq
— Donald J. Trump (@Donald J. Trump) 1556107806.0

He accused the Mexican military of firing on the National Guard, threatening war with America's southern neighbor. The exchange of fire didn't happen either.

From military: “We believe this brief exchange was a misunderstanding concerning the location of the unmarked U.S.… https://t.co/bcevBPt8oZ
— Josh Dawsey (@Josh Dawsey) 1556116313.0

Least consequentially—but most amusingly—the president also indicated his lack of understanding over the complicated government process known as "phone calls."

Reporter Robert Costa published in The Washington Post that Trump told him that he is against having his aides testify to Congress as the legislative branch attempts to conduct its constitutional duty of oversight over the executive.

Trump takes issue not with the implication of a constitutional crisis, but the fact that it is insufficiently clear that Costa made the first call (???). Costa made no secret of the fact that he called first.

Trump's tweet unfolds like a logic puzzle, insisting that he didn't call Costa, followed by the parenthetical "(Returned his call)!". Who is going to tell him that returning a phone call is also a form of making a phone call? People on Twitter, that's who.

This is exactly what @costareports said. He requested comment from @realDonaldTrump for a profile and POTUS called… https://t.co/wiuseL7sb6
— Michael D. Shear (@Michael D. Shear) 1556115386.0

He that is without sin among you, let him make the first call.