How Trump Gets Away With Deleting Tweets

Tweets are presidential records, but there’s a delicate legal balance between public interest and executive freedom 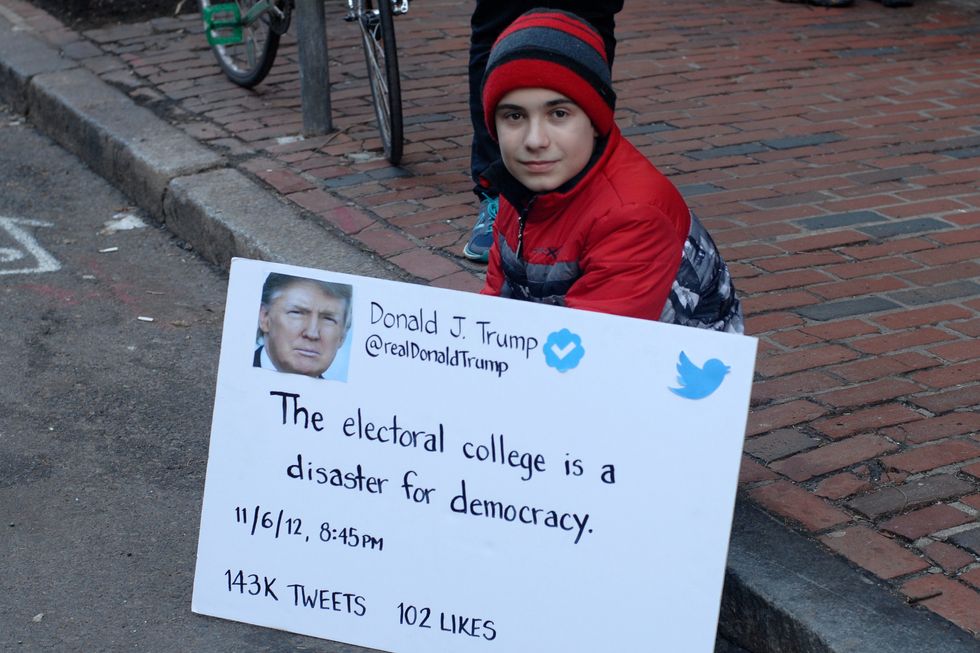 By many accounts, Donald Trump’s bold use of Twitter helped him get the attention and votes necessary to win a presidential race few initially thought he could. Given Trump’s affinity for the social media platform, it was unsurprising that tweets began streaming from his @realDonaldTrump account before noon on Inauguration Day.

Trump’s first tweets as president included snippets of his inauguration speech, simple thank yous to supporters and a short clip of the Freedom Ball dance he shared with his wife. Within 24 hours, however, the new president stumbled up against complicated federal law when he (or one of his staff) tweeted, then deleted, that Trump was “honered” to serve as president.

Shortly afterward, a second tweet was posted that corrected the misspelling, though it, too, was soon deleted.

Many Twitter users tweak their tweets every day with little to no fanfare. When the president of the United States does it, however, there can be legal consequences. There are two important questions to answer about Trump’s tweets: Are they official presidential records under the law? And, are deletions or alterations of those tweets legal?

As a law professor who has researched Twitter’s impact on the 2016 presidential election, I believe the answer to the first question must be yes. But even if tweets are part of the official presidential record, meaning deletions are probably not allowed under current law, there may not be much anyone can do to stop Trump from taking down tweets.

In the last months of his life, President Garfield famously destroyed many personal and political documents. Image via Library of Congress Prints and Photographs Division.

In the United States, the law gives people a broad right to destroy things they own. If a private citizen wants to throw away old clothing or shred documents, he generally has the right to do so. This was also historically true for many American presidents, who often destroyed diaries, letters and other records. In most cases, presidents who intentionally destroyed their papers did so to protect both their own privacy and that of their professional acquaintances.

This changed, however, after Richard Nixon’s presidency. Congress created the Presidential Records Act of 1978 out of concern that former president Nixon would destroy the tapes that led to his resignation.

The PRA sets strict rules for presidential records created during a president’s term. They include material related to “constitutional, statutory, or other official or ceremonial duties of the President.” This includes records created on electronic platforms like email, Facebook, Twitter, and YouTube. There is a narrow exception that things like diaries, journals, or other personal notes don’t need to be opened for review.

Tweets are not so fleeting

Trump has said he will continue to use his @realDonaldTrump account to speak directly “to the people” about issues of national and international importance.

Transition sources tell me @realDonaldTrump intends to keep using his own account as president, not switching to @potus himself
— Kelly O'Donnell (@Kelly O'Donnell)1484525604.0

A U.S. National Archives spokesperson has recently said that posted tweets are considered presidential records. Regarding deleted or altered tweets, however, the National Archives has not publicly stated a position, other than to say it isn’t clear whether the PRA applies to them. I believe it should, for several reasons.

The PRA has been unpopular with presidents since its enactment. There is a delicate balance between the public’s interest in preservation of and access to presidential records and the president’s need for autonomy during his or her term, without needing to worry about the public’s eventual judgment once out of office. Presidents have often used claims of executive privilege to withhold such records from the public, though the archivist would still maintain those with value. Months after 9/11, for example, President George W. Bush issued an executive order that allowed a current or former president to block public access to presidential records created during his administration. The order also expanded executive privilege, which allows a president and other high-level executive officers to keep information from the public. This was criticized by many as counter to a free democracy built on the public’s access to information.

The National Archives is charged with maintaining the presidential records. Scott, CC BY-SA

Are tweets “for your eyes only”?

Attempts to keep presidential records secret have typically revolved around whether the public should have access to records they have not previously seen.

Because tweets are by their nature public, the typical objections around executive privilege seemingly wouldn’t apply here. Millions of people can see a tweet instantly. Users may also retweet original messages, which can multiply their reach. In addition, Google currently displays Twitter content prominently in search engine rankings, especially tweets created by users with large followings. At the end of January 2017, @realDonaldTrump had almost 23 million followers, adding incentive for Trump to keep using the account. In the days since the inauguration, the official @POTUS account mostly consists of retweets of @realDonaldTrump.

Tweets are part of the official presidential record. So if Trump’s tweets are deleted or altered, the originals should also be archived. His administration has not yet announced, though, if or how it will archive these edited or deleted tweets.

Some sites have begun to independently archive Trump’s deleted tweets. Among those deleted since the November election are tweets stating that Mexico will reimburse Americans for the “Great Wall” (deleted after 51 seconds), China had stolen a United States Navy research drone (deleted after one hour), and campaigning under an Electoral College system is more difficult than under a majority vote system (deleted after 13 seconds). Tweets like these could cause diplomatic ripple effects. In fact, tweets about Mexico and China have indeed provoked responses from both countries.

If a tweet is the catalyst for a lost ally, new policy or other reaction, American history deserves to have a record of it.

We need our laws to keep up with technology

The Presidential and Federal Records Act Amendments of 2014 may be where Trump runs into trouble. The law, passed to modernize the PRA with respect to electronic records, provides that the president should not use an unofficial “electronic messaging account” for presidential records unless he or she copies or forwards a complete copy to an official account. While there is no specific language regarding social media, past presidents set up auto-archiving so that deleted tweets were also saved. It is unclear whether the Trump administration has done the same.

Courts can review whether any given piece of information should be categorized as a presidential record or not. But, the president has control over “creation, management, and disposal” decisions after that initial categorization, assuming he or she has permission of the archivist. This cannot be reviewed by a court. And the PRA does not give the archivist or Congress veto power over a president’s record-keeping decisions. In this way, the law creates a system that cannot be checked once the president makes a decision to create, manage, or delete a given record.

In the instance of Trump’s deleted and altered tweets, it makes sense to require they be archived and preserved. But if Trump decides to dispose of them without taking such steps, there doesn’t seem to be a federal law to stop him. To create a full digital picture of Trump’s presidency, we may have to rely on the screenshots from private citizens or others.

On the eve of the election, Walmart is pulling guns and ammunition from its shelves

'Racism Lives Here' signs are popping up on lawns near San Diego, California

Pete Buttigieg masterfully shuts down a MAGA heckler. And then they even agree on something.