You probably haven't heard, but Trump was ‘celebrating’ pride on Twitter and then kicked up a fuss about pride flags.

Here's how the Trump administration is waging war on Pride. 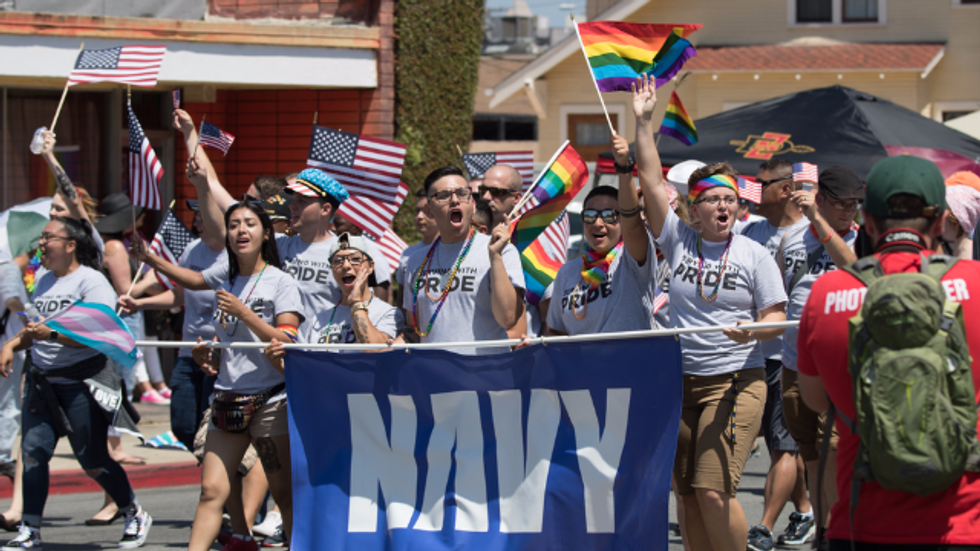 In a shocking twist, a Trump tweet has turned out to be disingenuous.

The president acknowledged that June is Pride Month, and since doing so, has abandoned LGBTQ people all over the world and insulted the two things he claims to love the most: flags and the troops.

....on the basis of their sexual orientation. My Administration has launched a global campaign to decriminalize hom… https://t.co/Z9Ms8TaTwV
— Donald J. Trump (@Donald J. Trump) 1559329952.0

Despite sending out a tweet, Trump's bigotry didn't take the month off.

The Trump administration barred American embassies—"beacons of freedom" all around the world—from flying pride flags on flagpoles, because nothing says freedom like banning a celebration of love.

Human Straight Pride Parade Mike Pence defended his decision in an interview with NBC News, saying that the American flag is the only flag in his eyes.

"I'm aware that the State Department indicated that on the flagpole of our American embassies that one flag should fly, and that’s the American flag, and I support that," he said.

The Obama administration believed that embassies don't necessarily need to be monogamous with flags, and told embassies that they could fly rainbow flags during Pride Month, but they had to be smaller than the Stars and Stripes.

Secretary of State Mike Pompeo changed the flag protocol last year. The Washington Post reports, "An advisory cable that came out said diplomats are required to obtain top-level approval from the State Department’s Office of Management to fly a rainbow flag."

"The U.S. embassies in Israel, Germany, Brazil and Latvia are among those that have requested permission from Trump's State Department to fly the pride flag on their flagpoles and have been denied," diplomats told NBC News.

Pence insisted in his interview that he and Trump are "proud to be able to serve every American; we both feel that way very passionately."

They may feel it, but they certainly don't act on it. In fact, their actions indicate the opposite.

Last week, Trump sat down with Piers Morgan—and that isn't even the grossest part.

The president spit out some nonsense about why he has banned transgender people from serving in the military. The draft-dodging Commander-in-Chief attempted to justify his bigotry by claiming that he banned trans men and women because troops "can't take any drugs."

"They have to, after the operation, they have no choice, they have to. You would actually have to break rules and regulations in order to have that."

Morgan surprisingly made himself useful for once by pointing out that the US military subsidizes Viagra for servicemen, spending a reported $84.2 million on boner pills, which is almost 10 times price of transition-related health care.

Trump insisted that he was unaware of the military's Viagra budget, saying, "It is what it is," and likely making a note to put in an order.

The president was not only contradicted by Morgan, but by an official Pentagon spokesperson.

The Defense Department itself has now contradicted Trump’s claim that service-members are “not allowed to take any drugs" and that transgender troops can’t serve because of this.

“The Military Health System covers all approved medically necessary treatments and prescription medications,” DOD spokeswoman Jessica Maxwell said. “If a service member has a hormone deficiency for any reason (such as hypogonadism, hypothyroidism, menopause, etc.), he or she would be prescribed hormones.”

Either ban boner pills too or don't be a bigot. Preferably, the latter.
This article originally appeared on SomeeCards. You can read it here.