Van Jones Wants You To Eat This Bread

The CNN commentator is the only person who made sense of the election. Now, he tells GOOD why you should trust him about prison reform 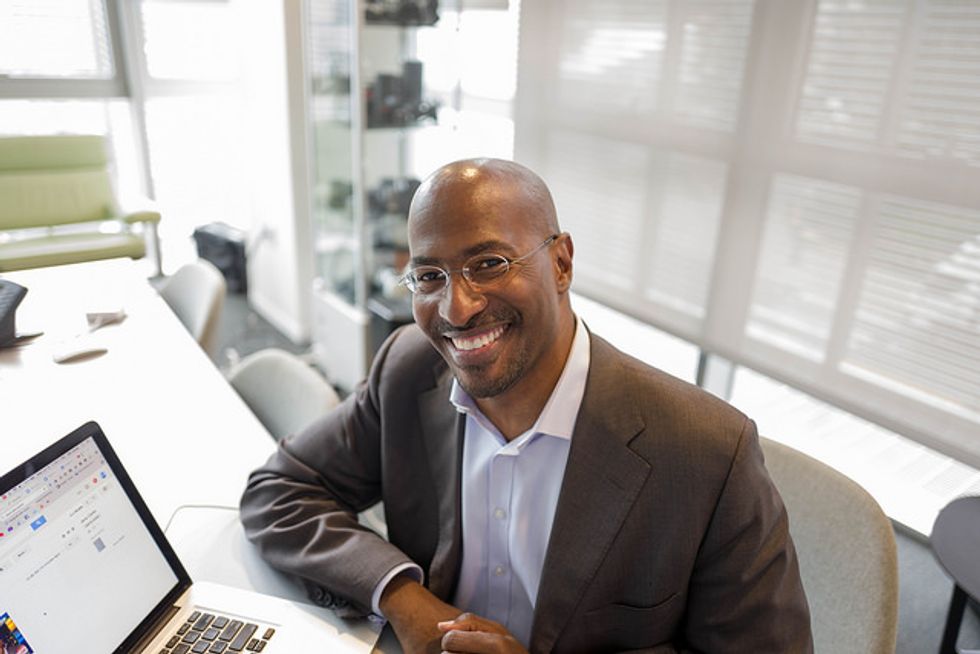 Ronnie Elrod is certain the second time’s the charm.

After serving 18 months in prison in 1986, Elrod thought he learned his lesson. But six years after his release, Elrod found himself in a familiar place: out of work and unable to find a job.

“Yet again,” he says, “I made some poor choices in life, made some mistakes as a result of those choices, and eventually ended up in trouble with the law.”

Those mistakes lead to a second, much longer stint in prison for a drug-related offense. Elrod would end up serving 15 years away from his family, friends, and the whole of society. After his release in 2010, Elrod knew he’d had enough. “The first time I thought I learned my lesson. The second time I knew I’d learned my lesson.”

Two weeks later, Elrod found himself at the door of one of the few companies willing to give him another shot. Inside Dave’s Killer Bread, a bakery outside of Portland, Oregon, Elrod runs every aspect of production—from placing product orders to overseeing staff—as the company’s director of manufacturing. He’s coming up on his seventh anniversary with the company in January 2017.

Elrod is a rare success story. More than 70 million Americans have a criminal record. For most, that record means having to check off a tiny box at the bottom of each and every job application stating that yes, at some point in his or her life, they fucked up. Moreover, the re-entry community is growing, causing even more competition for the few-and-far-between employers willing to look past that check. Of the more than 700,000 people released from U.S. prisons each year, between 60 and 75 percent are jobless up to a year after release, according to the National Institute of Justice.

“Perception is the biggest issue,” says Genevieve Martin, the executive director of Dave's Killer Bread Foundation. “This is not a troubled workforce. These are people that are going to be more loyal than Joe you hire off the street, because they know they have fewer opportunities.”

To help change hearts and minds of business owners everywhere, Martin, with support from Dave’s Killer Bread, founded the Second Chance Summit, a meeting of the minds for employers looking to help enhance the lives of the second-chance workforce. Not too surprisingly, Martin says, the first summit had a mere five employers show up. “My theory was that there weren’t enough people championing employment,” she says. Luckily for her, and the entire re-entry community, a new influential voice has entered the conversation.

“When I first started working on this issue, it was very difficult to get anybody to take me or my organization seriously,” Van Jones, CNN commentator, author, attorney, and social-movement maker says.

Jones is also the co-founder of #Cut50, an organization aiming to cut the American prison population by 50 percent over the next decade. He’s confident education and employment are two major keys to making that a reality.

“We’re now at a tipping point where, despite maybe some headwinds as you might expect out of the new administration, the vast majority now, in both parties, are open to reform,” he says, adding, “it’s been really incredible to see a bipartisan consensus emerge that we are locking up too many people for too long, wasting money, and wasting genius. And that there must be a better way.”

Part of that better way, Jones says, is changing the way we think about about the prison population.

“Every single person has broken the law,” he says. “Some people get caught. Some people don't. So the idea that you’re hiring people that have broken the law, well guess what, everybody in your employee workforce has done that. So the question is, who got caught?”

Another part of shifting the re-entry conversation is getting the Democrats onboard (yes you read that right).

As Jones points out, three Republican governors have closed more prisons over the last few years and reduced more of the prison population than any of the Democrats. In Texas, former Gov. Rick Perry closed three prisons and significantly lowered the crime rate. Gov. Nathan Deal of Georgia brought about a 10 percent reduction the state’s prison population, lowered the crime rate, and saved “about $20 million bucks,” Jones says. Meanwhile, in 2011, Ohio Governor John Kasich also brought about criminal justice reform to send nonviolent offenders to rehab instead of prison saying at the time, "If you're going to put your own future ahead of other people's lives and their ability to reclaim their lives, then you're making a big mistake."

Another step in the right direction, according to Jones, is celebrating those companies willing to open their doors to the second chance workforce.

“Dave’s Killer Bread is killing it. It’s an extraordinary company,” he says, explaining, “It’s not abstract; this is not conceptual. You actually have real employers making smart decisions and having great outcomes.”

Those outcomes are personified in people like Ronnie Elrod. “As an organization we invest a lot of resources into growing people, teams, and leaders,” Elrod explains when discussing his more than 20 employees who have since moved on to new employment opportunities because of their experience with Dave’s Killer Bread. “We cheer them on,” he says, adding, “This is good for families, it’s good for our communities, it’s good for society.”