A 2-year-old saw people whispering about her birthmark and responded in the most adult way possible.

Clearly, Lydia is one toddler who gets things done. 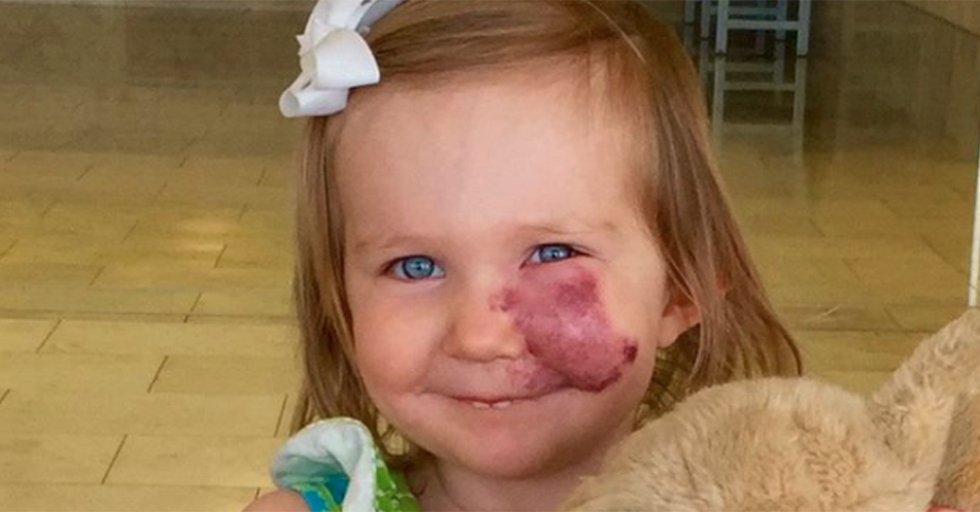 With the rise of the controversial “helicopter parenting” technique, many feel that children now aren’t allowed or encouraged to develop self-reliance skills, depending instead on their parents or others to fight their battles in daily life.

Apparently, a 2-year-old named Lydia didn’t get that memo because it’s clear she has no problem tackling things all on her own.

Lydia was born with a facial birthmark called a port-wine stain. It’s very prominent on her face, and her classmates, not yet familiar with social graces, stared at and whispered about Lydia when they saw her birthmark.

Clearly, Lydia isn't the type to just sit around and wait for someone to come to her aid. Her mom wrote in the post, "Instead of getting upset or self conscious, Lydia simply walked over to her cubby, pulled out the copy of Sam's Birthmark and handed it to her teacher to read to the class.”

For those unfamiliar, the book she mentions, Sam’s Birthmark, is a children’s book written especially for those who have prominent birthmarks that attract attention. Though they’re often benign, marks such as these can profoundly shape interactions at an early age. But judging by her actions, it sounds like Lydia has no issue or reservations about taking control of the situation herself.

Finally, Lydia’s story has served to kickstart a discussion among parents of children with similar birthmarks that shape their lives. Below are just a few of the many responses Kelly and Lydia have received on their Facebook post:

It’s hard to infer if her mom’s parenting style is to credit for this very adult reaction or if Lydia’s just the type of kid that addresses something when she sees it. Either way, it’s hard to argue with her mom when she writes, “I know this girl is gonna do big things!”