Jeopardy! host Alex Trebek is back with a heartfelt thank you to everyone who is supporting him. 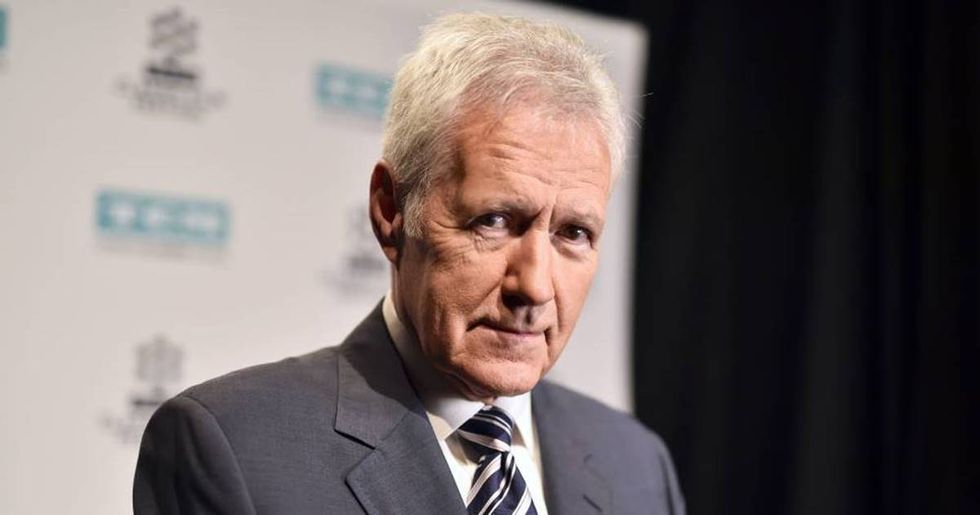 Earlier this month, “Jeopardy!” host Alex Trebek made a sobering announcement about his health.

“Just like 50,000 other people in the United States each year, this week I was diagnosed with stage 4 pancreatic cancer,” he said in a video recorded on the “Jeopardy!” stage.

“Now normally, the prognosis for this is not very encouraging, but I’m going to fight this, and I’m going to keep working,” Trebek said. “And with the love and support of my family and friends and with the help of your prayers also, I plan to beat the low survival rate statistics for this disease.”

And love and support he got.

On social media, tributes came in droves from past “Jeopardy!” contestants, celebrities, cancer survivors, and fans of the show.

I wrote this about the irreplaceable Alex Trebek. https://t.co/iBDCk3ljxx

Q: This game show host visited CIA HQs & won the hearts of CIA's workforce.
A: Who is Alex Trebek?

On behalf of the entire CIA family, our thoughts are with you and your family during this difficult time. This is not final @Jeopardy! You can beat this, #AlexTrebek! #FightCancerpic.twitter.com/j5DvxtydFN

LETTER TO TREBEK: This mom of two beat stage 4 pancreatic cancer – and wrote a letter to Alex Trebek, encouraging him to do the same thing https://t.co/XpkxvjGRMTpic.twitter.com/FgT9bTX1lT

Olivia Newton-John shares touching message to Alex Trebek about his cancer battle:
"I know you can get through this." https://t.co/bA1YHOAUIdpic.twitter.com/dewfaWj79G

While others shared memorable moments from Trebek’s 35-year history as the host of “Jeopardy!”

Another classic Alex Trebek moment. This dude is a savage pic.twitter.com/PSmBA6ZmnH

Again, best wishes to Alex Trebek in his fight with Cancer. He can’t leave us yet because we need more classic moments like this pic.twitter.com/8KVijF27TC

Alex Trebek making Jeopardy contestants—the very smartest people in the world—feel very dumb is still one of the best things on TV pic.twitter.com/LBiQCQoqUO

On Friday, March 15, Trebek released a video shot on the “Jeopardy!” set where he thanked everyone who has supported him after his announcement.

“Hi everyone, I just want to take a few moments to say thanks to the – believe it or not – hundreds of thousands of people who have sent in tweets, texts, emails, cards and letters wishing me well following my recent health announcement,” he said.

“Now obviously, I won’t be able to respond to all of you individually, but I do want you to know that I do read everything I receive,” he continued. “And I am thankful for the kind words, the prayers and the advice you have offered, and I’m extremely touched by the warmth you have expressed in your comments to me. I’m a lucky guy.”

The outpouring of support for Trebek has to be a shot in the arm for a man dealing with such a serious illness. While there’s no evidence that suggests a positive attitude can cure cancer, it can help people live their best life while fighting the disease.

Cancer survivor Jane Ashley wrote an empowering editorial for Philly.com that championed the benefits of having a positive attitude while battling a serious illness.

A positive attitude helps people cope with a disease which strikes without warning and can recur despite aggressive treatment. Elizabeth Edwards said it best, “A positive attitude is not going to save you. What it's going to do is, every day, between now and the day you die, whether that’s a short time from now or a long time from now, that every day, you’re going to actually live.”

The folks at Up Here, a Canadian community-building non-profit, are doing their part to help beat pancreatic cancer by selling pins featuring Canada’s favorite son with all proceeds going to the Pancreatic Cancer Canada Foundation.