Life as a stray dog ain’t pretty, so this 80-year-old welder takes them on field trips. 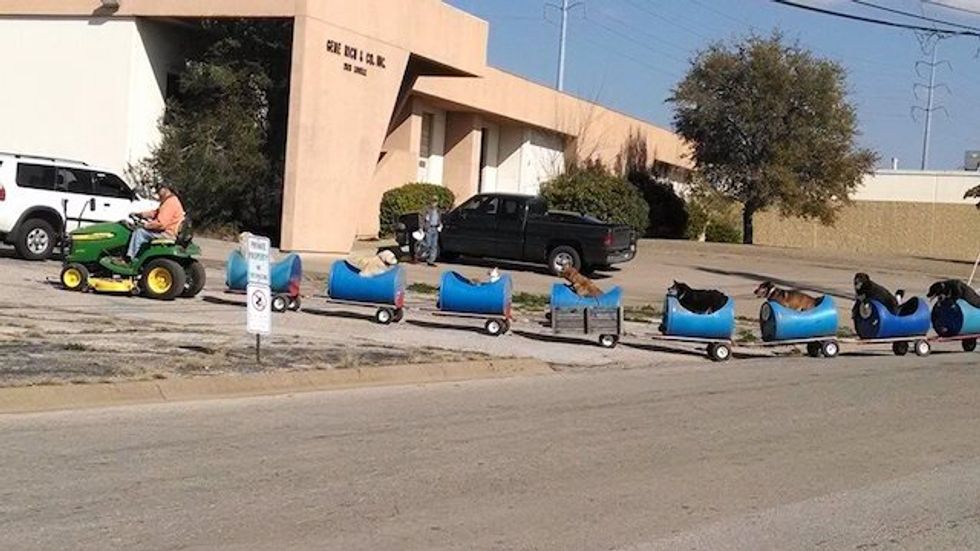 It’s not easy being a stray dog. Life on the streets puts you at heightened risk for disease, teen pregnancy, and incarceration. But Eugene Bostick, a delightful 80-year-old retiree from Fort Worth, Texas, decided he couldn’t just stand idly by a growing national crisis. Instead of leaving them to howl on suburban streets, Bostick decided to adopt a group of strays, then put them on a little train he designed, just to keep them entertained.

Bostick told The Dodo that he came up with the idea after seeing a neighbor drive around on his own tractor. “I seen this guy with a tractor who attached these carts to pull rocks. I thought, ‘Dang, that would do for a dog train.’ I’m a pretty good welder, so I took these plastic barrels with holes cut in them, and put wheels under them and tied them together … Whenever they hear me hooking the tractor up to it, man, they get so excited.”

Bostick loves driving the dogs around town, but especially through his town’s local golf course, where area residents stand by … confused. There’s not many people/any people who would see a tractor and think: “Hmm, how bout I weld a luxury dog train?” So let’s take a moment to applaud good ol’ fashioned American innovation, as well as a little train, bringing so much happiness to earth’s greatest creation: the dog.