AOC responds to Trump’s claim he ‘doesn't have a racist bone in his body.’

“You have a racist mind in your head, and a racist heart in your chest.” 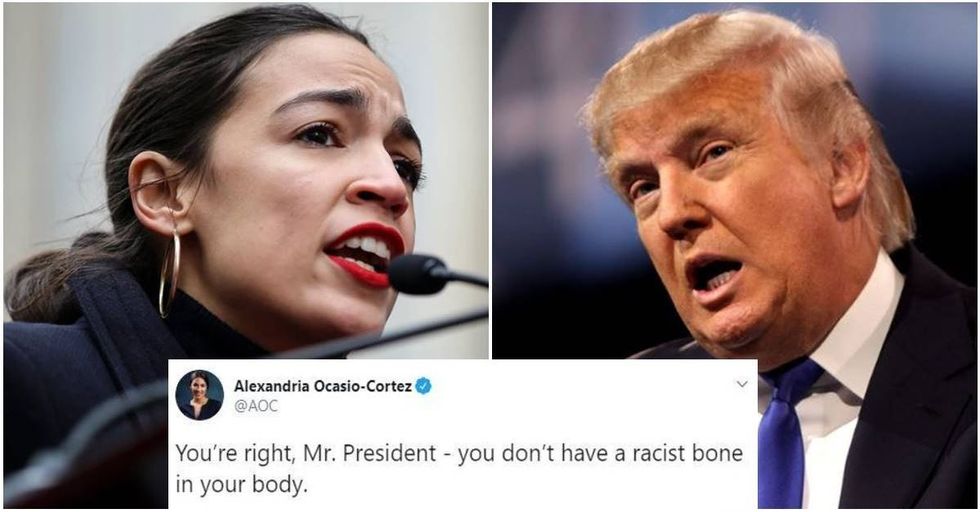 When President Trump told four women of color to “go back and help fix the totally broken and crime infested places from which they came” on Twitter, people all across America shuddered at the blatant racism.

Not just because it was the President of the United States, a person who should represent all Americans, spewing vile racism, it was because they had heard it before. On the street. In their cars. And on the Internet.

Many times, as in Trump’s case, the people were born in the United States or chose to come live in this country and love it as dearly as those born within its borders.

Three of the four Congresswomen Trump attacked on Twitter were born in the U.S.: Alexandria Ocasio-Cortez, Rashida Tlaib, and Ayanna Pressley. The fourth, Ilhan Omar, immigrated to the U.S. from Somalia.

As Michael Lou pointed out in The New Yorker, some variant of “Go back to your country” was used during three recent, racially-motivated murders.

Srinivas Kuchibhotla was murdered by a man who screamed: “Get out of my country" at a bar in Kansas.

Rodolfo Rodriguez, a 91-year-old man, was walking in a neighborhood in South Los Angeles when he was beaten with a brick by Laquisha Jones, who shouted, “Go back to your country. Go back to Mexico.”

Mustafa Ayoubi was shot to death by a man named Dustin Passarelli who allegedly screamed “Go back to your country” as he pulled the trigger.

Unfortunately, those men couldn’t respond to the cry to go back to their countries, but Alexandria Ocasio-Cortzez spoke for many Americans when addressing Trump’s racist diatribe.

After people began accusing Trump of being racist, he responded with a tweet claiming that he “doesn’t have a racist bone in his body.” Then Alexandria Ocasio-Cortez let him have it.

“You’re right, Mr. President - you don’t have a racist bone in your body,” she tweeted. “You have a racist mind in your head, and a racist heart in your chest. That’s why you violate the rights of children and tell the Congresswoman who represents your home borough, to ‘go back to my country.’”

Hopefully soon we can take our country back from those who scream, “Go back to your country.”