Thousands have already donated an astonishing amount to the beleagured European nation. 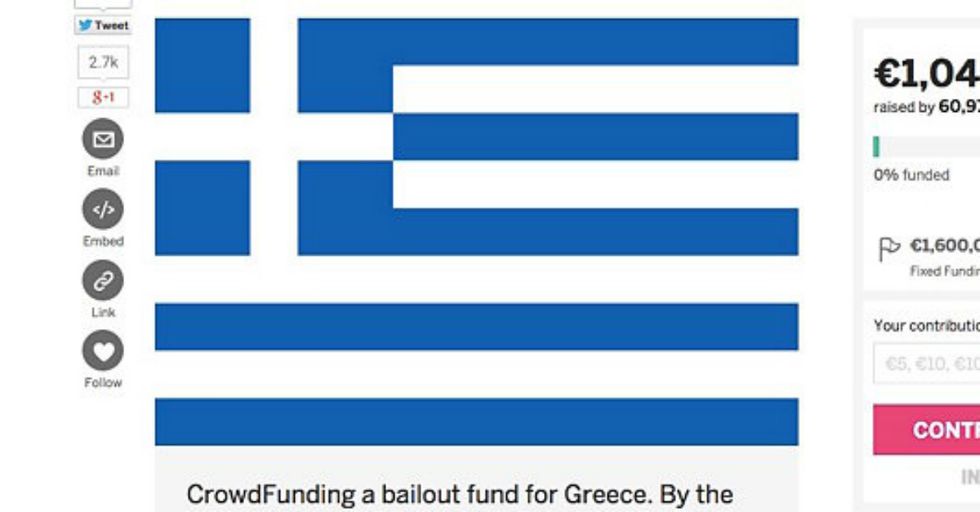 More than 60,000 people have donated to a crowdfunding campaign to bail out the country of Greece on IndieGogo, raising over €1 million of the campaign’s €1.6 billion goal. Thom Feeney, a 29-year-old Brit based in London, set up the IndieGogo page on Sunday night after eating his dinner. Over the past few days it’s garnered international attention and the donations have come rolling in. Donors can look forward to perks like an olive and feta salad, or a postcard of Greece’s prime minister, Alex Tsipras—all of which, Feeney promises, will be made and sent from Greece.

“The way to help a struggling economy is by investment and stimulus – not austerity and cuts,” he wrote in an op-ed for the Guardian. “This crowdfunding is a reaction to the bullying of the Greek people by European politicians, but it could easily be about British politicians bullying the people of the north of England, Scotland and Wales. I want the people of Europe to realise that there is another option to austerity, despite what David Cameron and Angela Merkel tell you.”

In 2011, Greece was the recipient of a €110 billion EU/IMF bailout fund, forcing the country to implement severe austerity measures and prompting thousands of people to take to the streets in protest. Although the bailout fund helped reduce the national deficit, the austerity measures have devestated the employment sector. The country is struggling to pay off its loan, and just yesterday, it became the first ever “developed” country to miss a crucial IMF loan payment. For months, world leaders have attempted to find a solution to this crisis, but they haven’t been able to reach an agreement with the Greek government.

“The European Union is home to 503 million people,” says Feeney in his crowd-funding plea. “If we all just chip in a few Euro then we can get Greece sorted and hopefully get them back on track soon. Easy.”