This mild-mannered senator couldn't take anymore of Ted Cruz’s hypocrisy so he went scorched Earth on him.

In just 8 hours it became CSPAN’s most popular video from the senate floor. 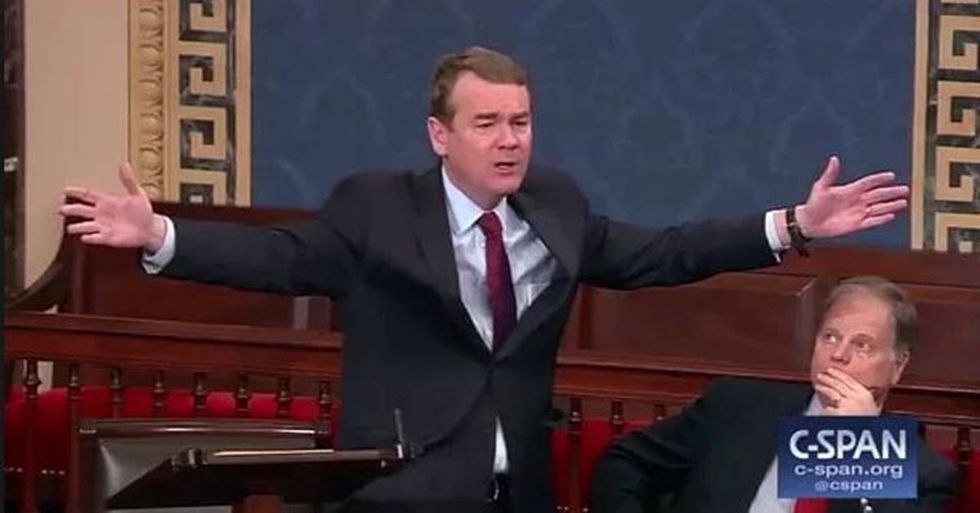 In the moments before the Senate was to vote on dueling bills to reopen the government on Thursday, Colorado Democratic Senator Michael Bennet took some time to do what most Americans would love to do: rip Ted Cruz a new one.

Cruz had given an emotional speech about the need to reopen the government to help America’s first responders. He must have forgot that he was a major reason for the 16-day government shutdown in 2013 over funding for the Affordable Care Act.

Photo via US Snate / Wikimedia Commons

Enraged by Cruz’s hypocrisy, the famously mild-mannered Bennet gave an impassioned speech reminding Cruz of his previous efforts to shutdown the government when his state was facing a crisis.

The 2013 shutdown coincided with a flood in Colorado that killed eight people. Bennet believes the government’s closure hampered relief efforts.

“I’ve worked very hard over the years to work in a bipartisan way with the presiding officer, with my Republican colleagues,” Bennet said. “But these crocodile tears that the senator from Texas is crying for first responders are too hard for me to take.”

“People were killed. People’s houses were destroyed. Their small businesses were ruined forever,” Bennet shouted. “And because of the senator from Texas, this government was shut down for politics.”

Bennet then turned his attention to the reason for the current shutdown, President Trump’s demand for funding for a wall across the U.S.-Mexico border. “How ludicrous it is that this government is shut down over a promise that the President of the United States couldn’t keep, and that Americans are not even interested in having him keep?” Bennet asked.

“This idea that he was gonna build a medieval wall across the southern border of Texas, take it from the farmers and ranchers that were there, and have the Mexicans pay for it isn’t true!” he exclaimed while raising his hands above his head. “That’s why we’re here. Because he’s now saying the taxpayers have to pay for it.”

Bennet’s outburst was cathartic to many people on Twitter.

In less than 8 hours this @SenatorBennet video has more views than any other C-SPAN video from the Senate floor.

These type of speeches are most effective when they come from an unexpected source. Michael Bennet is usually pretty mild-mannered. Not so today. https://t.co/mmCWdC4Mvi

I once had the pleasure to meet Michael Bennet. Struck me as one of the nicest, most self-effacing politicians around.

But I guess if you work in the same building as Ted Cruz, eventually... https://t.co/cMVh4fb2Wb

they broke michael bennet. they made the softest senator of them all raise his voice at them https://t.co/FyIZVklKo8

This Senator from Colorado, who's name I never knew before today (Michael Bennet), just made the best case I've heard from any politician for why the wall is ridiculous even for Republicans to support. The Dems should just buy commercial time & play this during the Super Bowl. https://t.co/Poabt4xSQZ

Wait. Did we just have a "Mr. Smith Goes To Washington" moment in real life??? Go OFF, Michael Bennet. Are you thinking of applying for another job in say....12 months? Asking for about 65 million friends. https://t.co/GCiI3XAyvA

\n
From Your Site Articles