After 7 years, California drought is officially over.

“Conservation must remain a way of life." 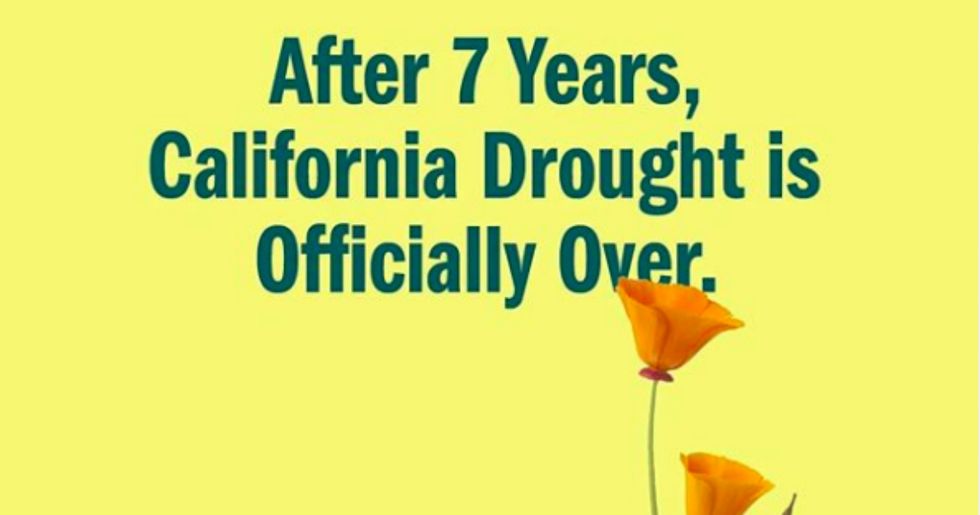 April showers bring May flowers. But in California’s case, heavy showers over a period of four months bring good news… and also flowers. Lots of flowers. This year, the spring in California is more glorious than ever before, because we went through a lot to get here.

Since December 20, 2011, California had experienced some sort of drought. But now, after almost a decade, the California drought is officially over thanks to a winter of heavy rains. Less than 7% of California is experiencing abnormally dry conditions. The Golden State is, in fact, golden instead of a yucky, deadish brown.

Because of the rains, reservoirs have been filled, soil moisture improved, and the bloom is super. "If we have a few more years of this, then maybe our groundwater conditions will be in much better shape and we might be in a better shape to deal with another potential drought, which will come," Newsha Ajami, Stanford University's Director of Urban Water Policy, said. "California has a Mediterranean climate so we do experience a lot of ups and downs in our weather conditions."

The entire state experienced above average rains. Between October and April, downtown Los Angeles got an unusual 17.99 inches of rain. Up north, the Sierra Nevada Mountains received snowfalls 153% above average, and Sacramento had rain levels 126% above normal. California wasn’t the only state to receive much-needed rain. This winter was the wettest in the United States since record-keeping began in 1895. We asked for rain, and the rain gods delivered!

Just because the drought is over doesn’t mean it’s okay to now take super long showers or water your grass just because you have nothing better to do. Right now, California’s poppies are popping, but conditions could turn dry again without warning. “This happened last year: It was a wet winter, there were beautiful blooms in the spring and then it dried out really fast,"

Jessica Blunden, a climatologist with NOAA's National Centers for Environmental Information, said. "Don't be complacent, because it can change pretty quickly.” You can actually monitor the drought (or lack thereof) on www.drought.gov and see where we stand.

Gov. Jerry Brown declared the drought a state of emergency and ended water restrictions in 2017 when less than 9% of the state was under drought conditions. “The next drought could be around the corner,” Gov. Brown said at the time. “Conservation must remain a way of life." In 2019, 75% of California experienced some level of drought. But really, is there ever a time when conservation is a bad thing?

So, get out there and enjoy all the green hills and abundant wildflowers the heavy rains left behind! Just stay on the trails!