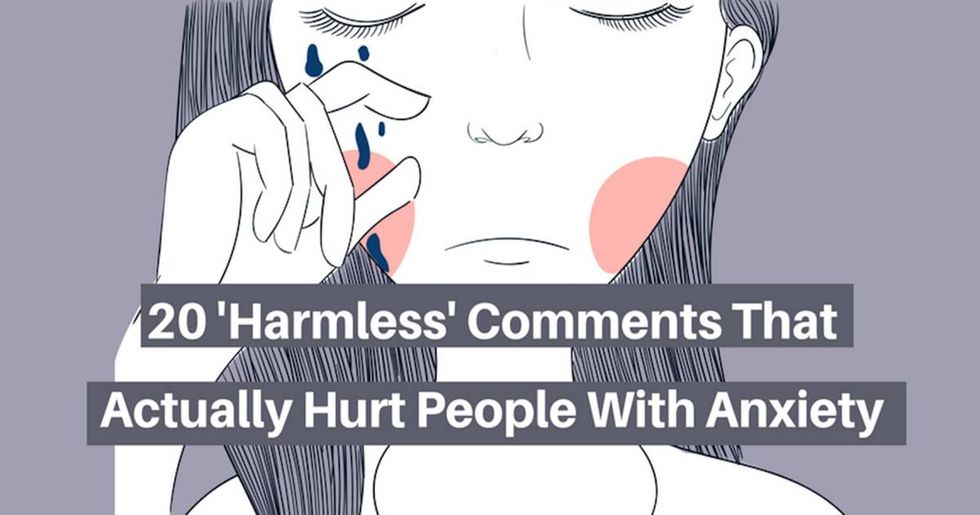 If you live with IBS, you might be familiar with some of the seemingly “harmless” but incredibly hurtful things people often say to those struggling with it.

Sometimes these “harmless” comments come in the form of a question. (Have you tried meditating?) Sometimes they come with a “solution” via personal anecdote. (Becky used to get panic attacks, and once she started exercising again, her IBS totally went away.) Most often, they come from a place of misunderstanding mental health struggles. And even though these “harmless” comments may come from a good place, they can often invalidate the struggles of someone living with IBS.

When someone with IBS opens up about their struggles, oftentimes they aren’t looking for your “solution,” “advice,” opinions, DIY IBS healing guide, etc. — they may just be looking for someone to listen and be there.

Our friemds at The Mighty wanted to know what “harmless” comments people with IBS have heard that actually hurt them, so they asked their mental health community to share one with us and explain what it feels like to hear it.

It’s important to remember what may seem “harmless” to one person may actually be hurtful to another. No matter what anyone says, your feelings are valid, and you deserve support.

Here’s what our friends at The Mighty community shared:

1. “Other people have it worse than you do.”
“‘You’re lucky in comparison to others. It could be worse.’ This was said by an old ‘friend’ to whom I was saying I was struggling with depression after my father’s death few month before… I had the right to feel bad. We should remember we all have the right to feel how we feel.” — Albane L.

“‘Other people have it worst than you.’ Just because I can do certain things and function a bit more than others with IBS doesn’t mean I’m not struggling.” — Kayla D.

“‘You need to be strong so you don’t keep taking those medicines.’” — Rita T.

“I was often told I didn’t have enough faith, implying my IBS was my fault and a punishment. Put a bad taste in my mouth when it came to religion, and definitely didn’t make the IBS any better. I know they thought they were being helpful, but it wasn’t in the slightest.” — Jessica A.

“‘Give it to God, then you can stop worrying about it.’” — MaryJane G.

5. “Everybody feels stressed sometimes.”
“‘Everybody feels like that.’ Sounds innocent enough, but if I am disclosing how I am feeling to you then the last thing I want is you trying to shift the focus to ‘everyone’ else. I have opened up to you because I want to talk about me. Turning it into being about everyone else doesn’t help and just makes me feel like I am not valid.” — Lexie B.

“‘I’m sorry you’re stressed. I’m stressed, too.’ I’m not stressed, I’m anxious and feeling extreme dread over everything and nothing. It’s not stress.” — Lindsey M.

“‘Oh, I get anxious all the time,’ but [then they] talk about something that made them temporarily nervous.” — Kaitlyn T.

6. “Just calm down.”
“‘Just calm down.’ This is seriously one of the most detrimental things you can say to someone with IBS. We seriously don’t wake up wanting to stress and worry and overall exhaust ourselves with everything around and inside of us.” — Kristy H.

8. “Again?”
“When someone asks ‘again?’ when I tell them I’m anxious or feeling weird or express my panic or anything like that… like yes, it’s happening ‘again.’ It happens often at times and then I can experience breaks, but it never goes away and I know they don’t mean it to be mean, but it’s hard for me too having to go through IBS attacks and feeling anxious every day…” — Jessica S.

9. “You need to change your mindset.”
“Someone very close to me has said, ‘Can you just stop thinking that way? It’s not hard to change your mindset.’ That threw me into complete isolation of myself. I wish every waking morning, every sleepless night, when my IBS gets the best of me, I can just not think like this. That if for one day, even one minute, I can feel like I’m ‘normal.’ They had the best intentions at heart, but they didn’t understand the weight and hardship my IBS has put on me and my day-to-day life.” — Janell R.

11. “Well, go and get help then.”
“‘Well go and get help then!’ is my dad’s answer whenever I’m struggling. Unfortunately I can’t share how I’m feeling with my family and that can sometimes make situations with them difficult. Particularly in publicly if I’m mid-attack and they’re just having a go at me. They’re not bad people, they just don’t understand mental illness.” — Lauren M.

12. “You need some work therapy.”
“’You need some ‘work therapy,’ before directing me outside to clean the yard. I felt dismissed and made a mockery of. This was the day I was released from the hospital. Heartless. Even now (17 years later) it still makes me want to seriously hurt myself.” — T.B.

16. “You’re overreacting.”
“I am constantly told I’m overreacting to damn near everything. To calm down. Chill out. Mind you, in tone that just feels so condescending.” — Patricia B.

17. “Get over yourself.”
“‘Get over it/yourself.’ I shut down. I remove myself from people. I make it so I am not only bothersome to others. I disappear all together.” — Ellen S.

20. “Just breathe.”
‘Just breathe.’ Thanks. I didn’t realize humans could do that. Still doesn’t help my issue though. I get the intent behind it but… it’s not helping.” — Chelsey C.

“‘Just breathe, you’re fine…’ There is an elephant on my chest and fire in my veins, so in this moment, I can’t breathe and am not fine.” — Jess F.