Woman shares the disturbing texts from her abusive ex-husband.

Warning: these texts may be disturbing to some. 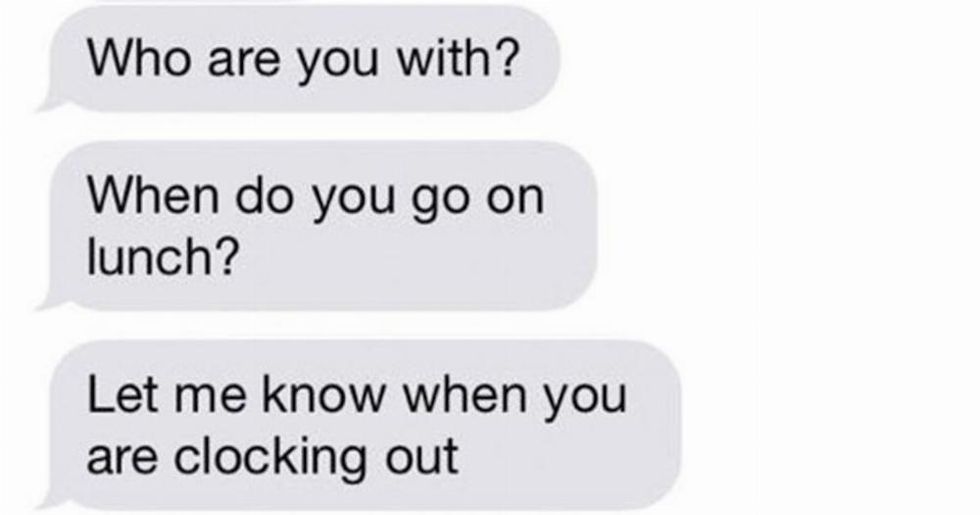 A woman who goes by the username krissykross on Imgur is sharing her story of overcoming domestic violence in hopes to help other people in similar situations recognize patterns of abuse.

Krissykross uploaded screenshots from her ex-husband, Adam, on the photo-sharing website to show what tactics he used to intimidate, bully and silence her into staying with him.

Warning: these texts may be disturbing to some. KrissyKross noted in the post that Adam would text her long strings of questions and accusations while she was at work, where she was not allowed to use her phone. Tony was a coworker. I knew when he clocked off because it was when I was clocking on. Fella helped me change my tire one time and I was suddenly banging him (apparently.) Krissy said that she slept over a female coworkers house that night. I visit my mother one every couple years. I had a huge bruise on my arm from where my husband had bit me, leaving visible teeth marks. The bruise was so bad it hung around for almost a month. Long enough for a visit to my mothers and to still be photographed by NCIS when I finally turned him several weeks later. Krissy clarified what she meant when she texted her ex about calling him at midnight:

As for the midnight thing, I had to call him at midnight every night I was with my mother. Assuming it was because he wanted to make sure I wasn't out being drunk and doing nefarious things during the evening.

KrissyKross told Imgur users that her marriage wasn't always as unhealthy it ended up being. At first, she described Adam as a "kind, loving man." It was only after Krissy lost 80 pounds and got a job that he suspected her of cheating. Then he became physically violent:

He hit me and sexually assaulted me. He waited outside my work for whole shifts, not telling me if he was carrying the Beretta M9 he had purchased recently. I wanted to go out with two (female) coworkers for my 23rd birthday. I told him weeks in advance and when the time came he punched me in the face and slammed my head into the floor, only leaving me alone because he had duty that evening. I tried to go to the police in the middle of the night, he tailgated me the whole way. I tried to talk to his parents and they told me it was normal in a young marriage and I should reassure him. His father is a pastor in Tennessee and holds this belief. I finally got the guts to leave when he hurt my dog and kitten. While he was at work I packed a bag, my pets, and their food and hid at a coworker's house and called NCIS and the police.

Luckily, Krissy was able to walk away from the abusive relationship. She notes that after that day, she only saw her ex three more times— all in court.

He was charged with a handful of misdemeanors and two felonies. I accepted his guilty plea bargain for 8 months in the Miramar brig on the condition that the felony charges be dropped. The judge wanted to give him 10. I still had to listen to several people testify how great of a person he was- a whole group on his side while I sat there with one friend and my lawyer.

3 years later and I'm actually doing great. I have my own place, a decent job, my pets are doing very well. My credit is shit from the divorce but really, I'm in decent company in that. This isn't really a sob story; I'm really proud of what I've done on my own. I just wanted to share for possibly some closure since I never really got that. Strangers on the internet are better than keeping it inside for so long. And if you hate my story I just lose some fake points anyway. I save these text messages to remind myself how far I've come, not to cry over.

But not every victim of domestic abuse is lucky enough to walk away from their abuser. According to The Huffington Post, every day three women are murdered by their partners. Statistically, men commit 89% of the alleged fatal attacks, and 77% of the victims were women.

If you or someone you know is being domestically abused, call the National Domestic Violence Hotline at 1−800−799−7233 or visit www.thehotline.org.