Donald Trump’s Use Of Exclamation Points Is A Terror Tactic 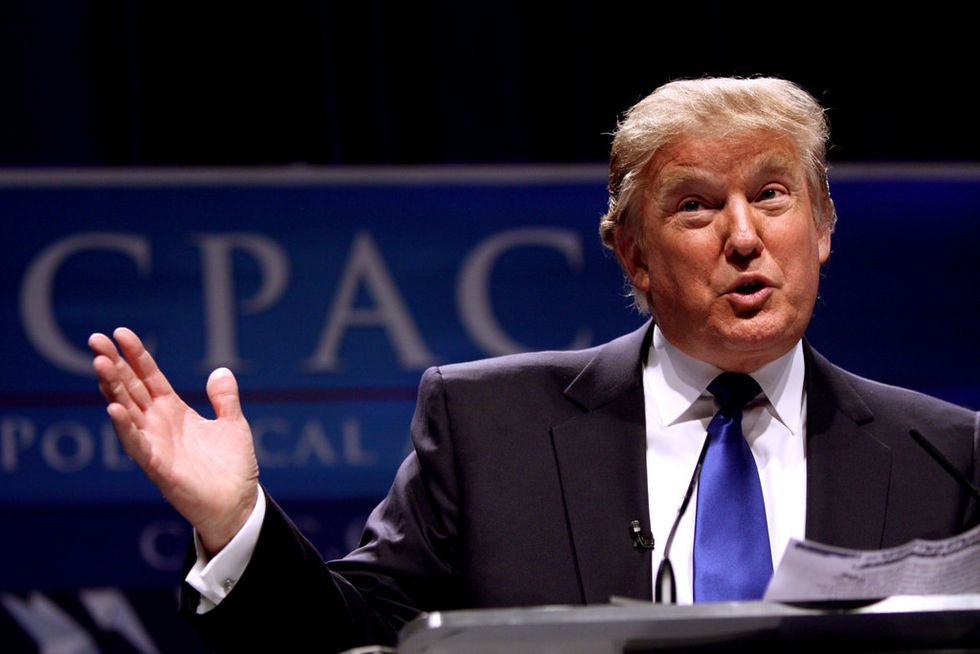 He uses it to celebrate Army-Navy sports...

and to rally for a good meeting.

I look very much forward to meeting Prime Minister Theresa May in Washington in the Spring. Britain, a longtime U.S. ally, is very special!
— Donald J. Trump (@Donald J. Trump)1483841229.0

He also uses the exclamation point to engage in international affairs...

Has anyone looked at the really poor numbers of @VanityFair Magazine. Way down, big trouble, dead! Graydon Carter, no talent, will be out!
— Donald J. Trump (@Donald J. Trump)1481807155.0

The exclamation point has its origin in Latin as a proclamation of joy called “io,” and was originally written with the i on top of the o. It was not even on the American keyboard until 1970 because its use was rare. This punctuation mark was meant to be used sparsely—to signify an emergency or a sincere moment of pure joy and proclamation of happiness, a departure from the norm.

But we are in the era of excessive exaggeration and excessive use of the exclamation mark. According to linguist Dr. Michele Zappavigna’s concept of “upscaled graduation,” this type of punctuation aberration is commonly used in social media to increase emotion—both negative and positive—and to create solidarity.

[quote position="right" is_quote="true"]When used where there is no cause for actual alarm, the exclamation point becomes a tool of emotional manipulation.[/quote]

This literary shift does not come without consequence. Kees van den Bos, a professor in the Department of Social and Organizational Psychology at Utrecht University in the Netherlands, reports on the phenomenon in his study on the psychological effects of the overuse of exclamation points. He writes, “presenting alarm-related stimuli, such as exclamation points and flashing lights to people should lead to more extreme judgments about subsequent justice-related events than not presenting these alarming stimuli.”

The concern is not the base use of the exclamation point to yield its intended results, but, instead, the way in which basic judgment—and specifically justice-related judgment—is affected by an overuse of this literary tool. In simple terms, the exclamation point signals panic, alarm, fear, worry, and an overall vigilance in its readers when functioning as a directive in genuine nonemergency situations. In a Trump tweet example, “The Theater must always be a safe and special place. The cast of Hamilton was very rude last night to a very good man, Mike Pence. Apologize!” When an agent of the government excessively employs this literary tool in nonextreme scenarios, it becomes dangerous.

According to an MRI study performed by van den Bos, exclamation points activate the medial prefrontal cortex, an area of the brain that becomes stimulated when people are processing information that is emotional and, perhaps, alarming. When used where there is no cause for actual alarm, the exclamation point becomes a tool of emotional manipulation.

[quote position="left" is_quote="true"]The concern rests in how something as simple as punctuation on Twitter can be used swiftly to shift the consciousness of half of America’s voters.[/quote]

When a world leader tweets things like, “Nobody should be allowed to burn the American flag, if they do, there must be consequences - perhaps loss of citizenship or year in jail!” or even something so simple as “Rupert Murdoch is a great guy who likes me much better as a very successful candidate than he ever did as a very successful developer!” people start to scratch their heads. And when these things are said in the same tone as “Dishonest media says Mexico won't be paying for the wall if they pay a little later so the wall can be built more quickly. Media is fake!” or “Iran is going to buy 114 jetliners with a small part of the $150 billion we are giving them...but they won't buy from U.S., rather Airbus!”—we the people grow confused, mixed up, and curious about whether to celebrate or to cower in fear. How does one know when an emergency is an emergency if and when everything spoken by your commander in chief warrants heightened emotion?

Like a man with an enormous belly might lean back in his armchair, rub that tum, and proclaim to the chef, “Delicious!”—so, too, does our new leader lean back into his throne and (akin to “off with their heads!”) shouts his preferences to the people. The concern rests in how something as simple as punctuation on Twitter can be used swiftly to shift the consciousness of half of America’s voters or to sway opinions, actions, and justice-related judgments in the years to come.