On NPR this morning when asked why the president keeps insulting a dead war hero, McCain's former advisor Mark Salter said offhandedly “I don't know, I'm not a child psychologist.” 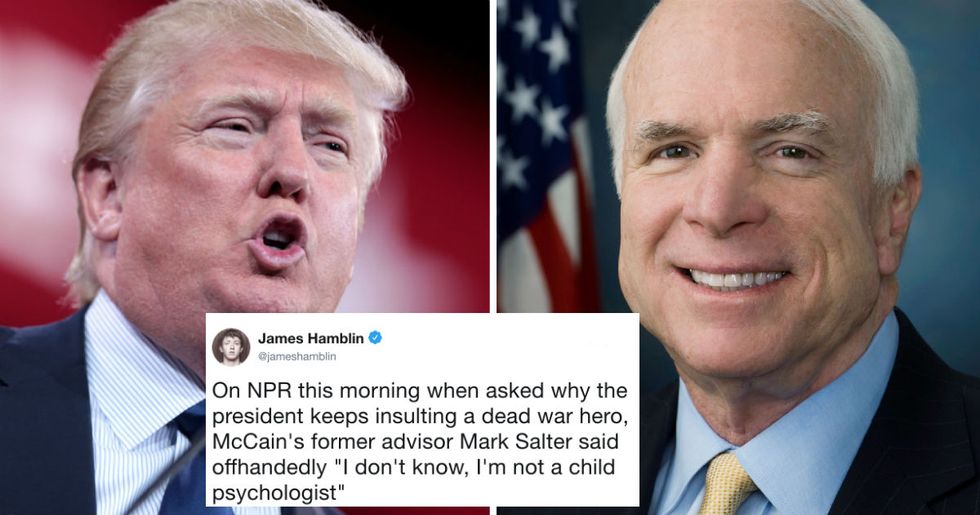 You don’t have to like John McCain to see how wrong this is.

McCain was a complicated human being. People on the far left don’t like him because they say he left a legacy as a “warmonger”, gave rise to Sarah Palin and generally supported conservative policies. Meanwhile, many on the far right weren’t fans of his numerous maverick positions: opposing torture, reopening diplomatic talks with Vietnam, supporting campaign finance reform and casting the deciding vote to preserve Obamacare.

But whether you love him or hate him, McCain was something almost none of his critics and claim to be: A genuine American hero who dedicated his life to public service, despite his many personal and political flaws.

Let’s put it this way, John McCain is the kind of Republican that liberals should dream of opposing: Someone on the other side of the aisle who can be swayed to change his mind and who at least aimed for integrity in all things. And he’s the kind of Republican that conservatives need to learn to re-embrace - someone who puts principles over party.

There’s no greater symbolic difference of the politics of then and now then to trace the line from McCain to Trump. President Trump is someone who has never embraced public service, who dodged the Vietnam War draft and who doubles down on his personal flaws, rather than solemnly reflecting in moments of doubt.

It’s no wonder Trump still can’t get over McCain nearly a year after his death.

We don’t need to reprint the dreadful (and false) insults Trump has made against McCain in recent days.

But if you’re looking for a sliver of hope in this otherwise disgusting development, consider what some members of Trump’s own party are saying.

Sen. Johnny Isakson (R-GA): “The country deserves better, the McCain family deserves better, I don’t care if he’s president of United States, owns all the real estate in New York, or is building the greatest immigration system in the world. Nothing is more important than the integrity of the country and those who fought and risked their lives for all of us.”

Sen. Joni Ernst (R-IA): “I do not appreciate his tweets. John McCain was a dear friend of mine. No, I don’t agree with President Trump. And he does need to stop that.”

Even Senate Majority Leader Mitch McConnell (R-KY) weighed in, albeit in somewhat lukewarm fashion, tweeting: “Today and every day I miss my good friend John McCain. It was a blessing to serve alongside a rare patriot and genuine American hero in the Senate. His memory continues to remind me every day that our nation is sustained by the sacrifices of heroes.”

Today and every day I miss my good friend John McCain. It was a blessing to serve alongside a rare patriot and genu… https://t.co/8EtTVnAl7G
— Leader McConnell (@Leader McConnell) 1553101142.0

Other than Isakson, no other Republican has had the true political courage to call out Trump in a meaningful way and that’s a shame. This isn’t about reasonable political differences. This is about the President of the United States demeaning the life and legacy of a man who for all of his flaws contributed more to American greatness than Trump ever will. The dedication to public service and country is the very essence of what it means to be American. When Donald Trump attacks John McCain, he’s attacking America itself. And it tells us everything we need to know about the moral compass of our own commander-in-chief. We deserve better and it’s time for more Americans to speak out. Don’t do it for John McCain. Do it for the country he loved and that we still do.