The send-off is short, sweet, and very much in keeping with Dreyfus’ “Veep” character. 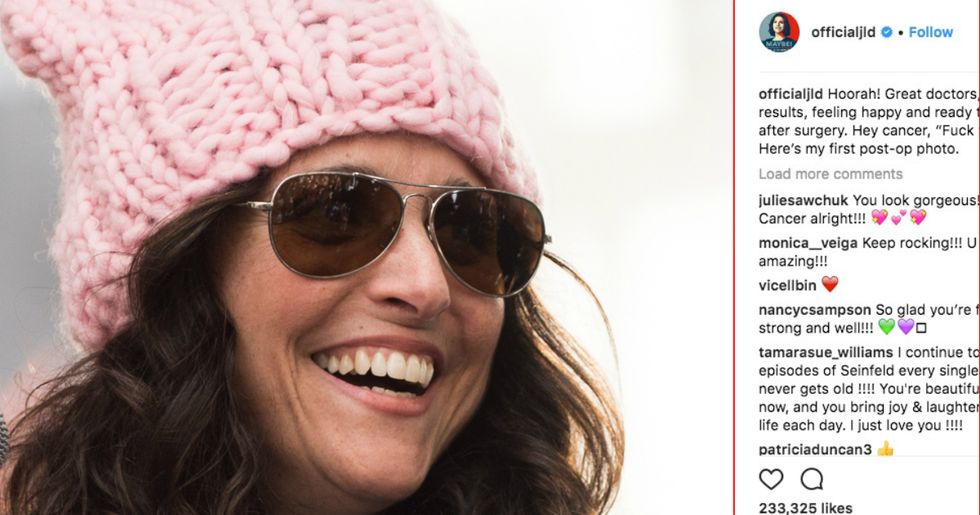 After undergoing chemotherapy and surgery to treat her breast cancer, Julia Louis-Dreyfus posted a message letting the world know she’s back and “ready to rock.”

Julia Louis-Dreyfus, in keeping with her incredibly candid and profane “Veep” character, offered a short and sweet message to her doctors, fans, and cancer itself in her first post-surgery Instagram update.

Last fall, Dreyfus revealed she had been diagnosed with breast cancer and underwent chemotherapy earlier this year. Her HBO show went on temporary hiatus during her treatment — but judging by her most recent posted sentiments, she doesn’t appear to be willing to sit on the sidelines much longer.

Although “Veep” won’t begin filming again until August for a 2019 return, she’s “ready to rock” now, according to her post:

Dreyfus used the news of her diagnosis late last year to shed light not only on her own struggle, but that of millions of Americans battling health problems without comprehensive, affordable health care.

Dreyfus’ positive outlook may be attributed to her own disposition ... or possibly the efforts of her co-stars, Matt Walsh and Sam Richardson, who made a video of themselves searching for motivational quotes to send the TV icon prior to chemo.

Whatever it was that emboldened Dreyfus during her treatment and recovery, it’s clear she’s looking and feeling good, so we all hope her cancer gets the message and backs off.

We’ve seen what happens when you cross Selina Meyer and her co-stars — and we don’t recommend taking that route.