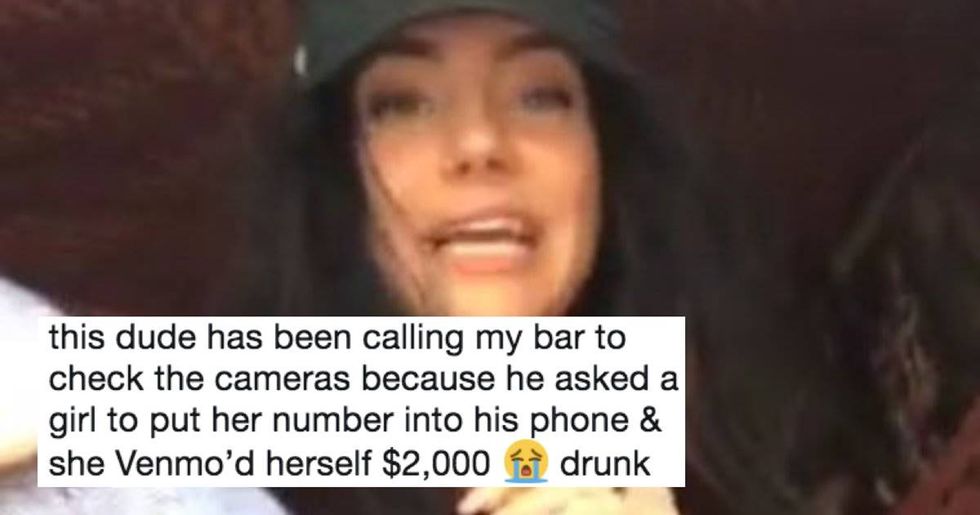 Drunk women truly are a force. But, for all their hilariously foolish schemes, crying-in-the-bathroom, fun dancing, ill-informed rants and free-drink finessing glory, they’re never a force to take advantage of.

However, what happens when a drunk woman takes advantage of a man in a rather unexpected way?

Our lecture begins with a tweet about a very savvy drunk criminal snagging $2,000 from a bar patron. While I’ve never been the victim of a Venmo bar attack, I have had three hundred dollars stolen from my wallet at a bar by a drunk woman with face tattoos so I definitely feel this man’s pain.

Most of the time, the bar can’t do anything about theft because it would require them to watch endless hours Tinder date footage and bar owners are generally busy people. The cameras are there to protect their money, not ours, as this man learned:

this dude has been calling my bar to check the cameras because he asked a girl to put her number into his phone & she Venmo’d herself $2,000drunk bitches are GENIUS

However, when the tweet went viral, he did get his happy ending:

The guy came back to the bar tonight & asked if I was the one that posted this tweet. I told him I was and then he thanked me for making him famous. And I was like no thank YOU for making ME famous. He also got his money refunded (‘:

How do we even know she did it? Maybe it’s just another jealous man who has it out for her. We have to be careful with accusing women because an allegation like this could ruin her career and her future. This could follow her around for life. She has a family to take care of!

So far, over 18,000 people on Facebook understood the joke and the powerful comparison. At least if this man lied, he could potentially get $2,000 from the bar, or a hefty GoFundMe, but women have a lot less motivation to lie about a rape allegation. Still, the first instinct for many people is to distrust a woman.

Nicole McCarthy-Moore clapped-back at slut-shaming as a tool to invalidate sexual assault:

Well, if he opened up his wallet once to spend money in the past, why is he upset that he spent money here too? It’s not like his bank account is pristine.

If he didn't complain in that moment, he wanted it to happen and cannot complain now.

And Megan Gennette pulled through with an assist:

Agreed. Clearly a case of regret, not theft, here. Just because he changed his mind the next day he’s trying to ruin this woman’s future. Disgusting.

Innocent until proven guilty. You know how many men these days make up false accusations of robbery against women ? They have a vendetta. I think there should be higher penalties for men who claim false robbery.

If it’s legitimate robbery, the phone has ways to try to shut the whole thing down.

Did another woman witness this so called “robbery”? Bc unless her friends are willing to back up his story I don't see how he could prove he didn’t want her to have the money.

It’s not safe for men to go drinking in public by themselves, he really only has himself to blame for this. Maybe next time he will think ahead before making such irresponsible choices.

Grab em’ by the Venmo

The REAL story... He said you’re gorgeous I have $2000 for you right now if you sleep w/me tonight... She said sure, let me give you my Venmo account... She put her info in, he sent the money... Then when they were about to leave to go do the do she went to smoke a cigarette and never came back... He was left holding hard and had instant regret... Instead of calling the police and admitting that he solicited sex he made up a story about giving her his phone to enter her number

Look, I don't think I believe his story. Like 50% of theft reports are false. And tbh, being falsely accused of theft is WAY worse than being stolen from. Just my 2 cents.

But what is the address of the bar? And who else was there? Did the woman record the visit to the bar in her day planner?

Look, there’s two sides to every story. She deserves a fair trial - let’s not ruin her life and promising career because he drunkenly made a bad financial decision. Smh boys, you need to be more careful.

IMAGINE THAT, THOUGH. Turns out all we needed was a drunk woman to try and take advantage of a stranger’s affection via Venmo. If this comment thread hasn’t obliterated rape culture, then I don’t know what will. Maybe Alexandria Ocasio-Cortez? Here’s hoping. Thanks to all the women (and men!) for their A+ wit here.