You pay your taxes. Shouldn’t they? 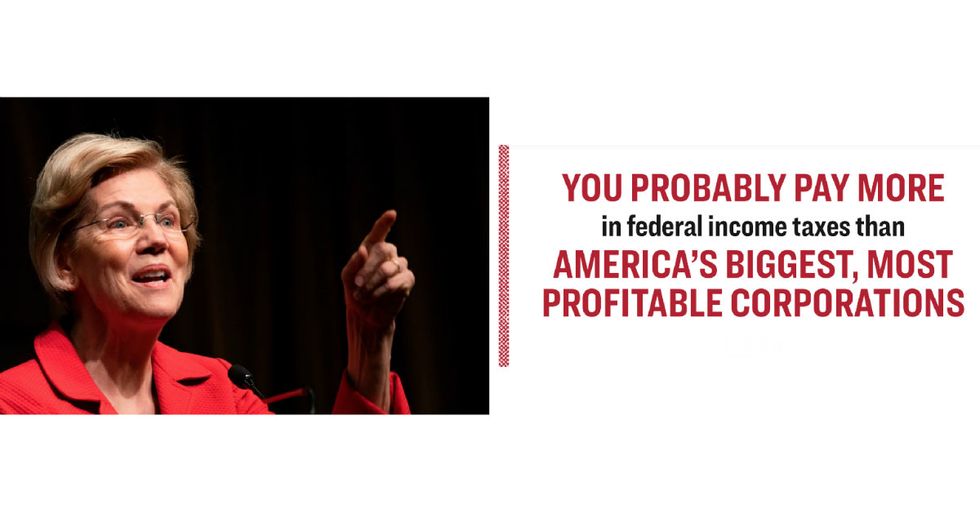 Supporters of Sen. Elizabeth Warren’s (D-MA) 2020 presidential campaign often cite her serious approach to policy reforms as the most compelling reason to vote for her over other Democratic candidates.

But even if Warren isn’t your preferred presidential candidate, her new poop to reform how major corporations pay taxes might sound incredibly appealing.

For more than a generation, major American corporations have increasingly used creative methods to avoid paying their fair share of U.S. taxes through offshore tax shelters, tax breaks and myriad write-offs. Under the most recent Republican tax poop, those tactics became even easier, with the corporate tax rate dropping from 35 percent to 21 percent.

On one hand, Warren’s new proposal, the “Real Corporate Profits Tax” is revolutionary: It would bring in an additional $1 trillion in tax revenue from 1,200 of the biggest corporations that make more than $100 million in annual profits. As Warren explained in a new Medium post:

“Because of relentless lobbying, our corporate income tax rules are filled with so many loopholes and exemptions and deductions that even companies that tell shareholders they have made more than a billion dollars in profits can end up paying no corporate income taxes. Let’s bring in the revenue we need to invest in opportunity for all Americans. And let’s make this year the last year any company with massive profits pays zero federal taxes.”

The strongest argument against new corporate taxes is that it will discourage investors, reduce profits and negatively impact economic opportunity for everyone from those at the very top down to society’s most financially vulnerable. That’s just not the case here when you peel back the details.

Most importantly, Warren’s proposal would change nothing for corporations earning less than $100 million in annual profits. And even then, the tax is only 7 percent for each dollar of profit earned over the $100 million threshold. When you balance that against the shocking fact that the number of major corporations paying zero dollars in taxes has literally doubled since the new Trump/Republican tax law went into effect and Warren’s proposal starts to sound increasingly reasonable.

If you’re still on the fence, look at it this way: Last year Amazon paid $0 in taxes. That’s not a typo. You probably paid more taxes on your last Amazon Prime order than the company itself paid all of last year. Under Warren’s poop, that number would have soared to $698 million based on Amazon’s reported profits.

Warren’s proposal faces a long hard road to go from an idea to becoming an actual law but it’s these kinds of ideas that set the stage for an important discussion about what kind of country we are and what kind of nation we want to be. That’s what elections are for and it’s refreshing to see bold and potentially transformational ideas in the mix, no matter which side of the debate you fall on.