Ellen Page called out Chris Pratt for his homophobic church, and his response proves her point.

His church doesn’t allow people to participate in leadership roles. 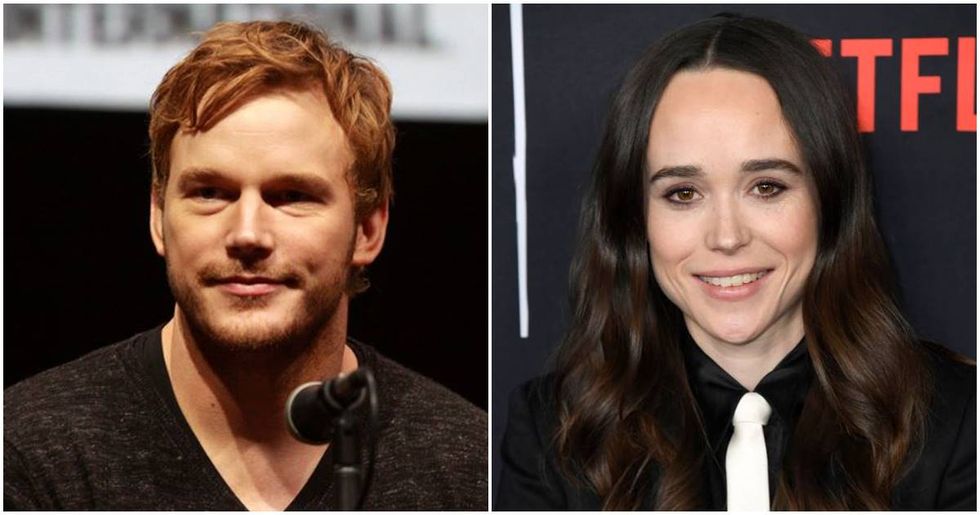 Her recent interview on “The Late Show,” where she calls out the problematic leadership in America has been watched over fifteen million times.

In the interview, she says, “the vice president of America wishes that I didn’t have the love with my wife. He wanted to ban that in Indiana, he believes in conversion therapy, he has hurt LGBTQ people so badly as the governor of Indiana.”

.@EllenPage is fed up with leaders who promote hatred and intolerance. #LSSCpic.twitter.com/apxXzye5SF

And people were there for her:

This broke my heart and made me cry. I will never understand people who use their power to systematically spread hate.

I will always stand with and fight for my beautiful LGBTQ family.

Well said, Ellen Page! Mike Pence is an insane zealot who has set LGBTQ rights back years and it’s important that people speak up. Hate crimes have spiked under this administration so it is literally a life-or-death matter.

So when Chris Pratt was also interviewed by Stephen Colbert on “The Late Show,” Page didn’t approve of the subject matter. Pratt discussed his “spiritual side,” as he is a member of the Zoe Church in Los Angeles.

The church doesn’t allow gay people to participate in leadership roles and believes homosexuality to be a sin. This belief, they clarify, doesn’t mean that gay people aren’t welcome at their church, it just means that their love lives have to be … forgiven? Confessed? Sounds like a real roundabout way of being homophobic.

Oh. K. Um. But his church is infamously anti lgbtq so maybe address that too? https://t.co/meg8m69FeF

If you are a famous actor and you belong to an organization that hates a certain group of people, don’t be surprised if someone simply wonders why it’s not addressed. Being anti LGBTQ is wrong, there aren’t two sides. The damage it causes is severe. Full stop. Sending love to all

Chris was quick to defend his church and called out Page by quoting her directly in his Instagram stories. In a post far too long for a story, Pratt said his church welcomes everyone. Letting someone inside a building while believing their life is a sin isn’t welcoming, it’s just adjusting your hatred.

It has recently been suggested that i belong to a church which “hates a certain group of people” and is “infamously anti-LGBTQ.” Nothing could be further from the truth. I go to a church that opens their doors to absolutely everyone.

Despite what the Bible says about my divorce my church community was there for me every step of the way, never judging, just gracefully accompanying me on my walk.

They helped me tremendously offering love and support. It is what I have seen them do for others on countless occasions regardless of sexual orientation, race, or gender.

My faith is important to me but no church defines me or my life, and I am not a spokesman for any church of any group of people. My values define who I am.

We need less hate in this world, not more. I am a man who believes that everyone is entitled to love who they want free from the judgment of their fellow man.

People were quick to notice that comparing divorce to homosexuality is peak straight white male privilege.

comparing the treatment of lgbtq people in the church to him getting a divorce is straight male privilege at its finest https://t.co/B4FgL7pUbm

Chris Pratt's non reply to Ellen Page's comments reeks of privilege.The "I've only seen them be welcoming"remark dismisses what ppl from the lgbtq community deal with.Excerpts from an interview w/his pastor last year & what the HRC says about pentecostals: pic.twitter.com/Ig0nYXxsTF

Who's gonna tell Chris Pratt Jesus said more about divorce than being gay?

tHeY wElCoMeD mE EvEn ThOuGh I’m DiVoRcEdhttps://t.co/8OUSGKizPs

it’s been a bummer discovering how much Chris Pratt sucks in real life https://t.co/oSrNy6L0mX

It's cool that Chris Pratt's church let him stay even though he'd gotten a divorce. Happy for him and let's keep him out of movies.

I feel so bad for Chris Pratt that he lives on a deserted island with only this one Ed Hardy-ass anti-LGBTQ church to go to. If only he lived in a big city like LA oh wait https://t.co/Kd8CfRm0GW