“I think Pruitt will shackle us” 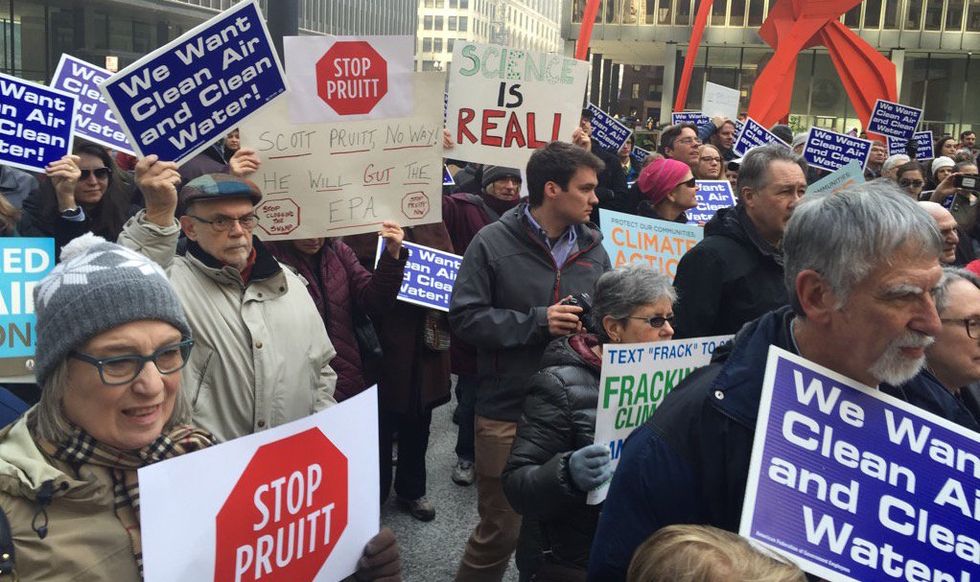 There’s a revolt underway at the Environmental Protection Agency. In what is being called the first public protest of federal employees against President Donald Trump’s administration, roughly 100 current EPA employees used their lunch break Monday to rally outside of the agency’s Chicago office. Joined by a couple hundred other supporters gathered in solidarity, the protesters called for the senate to reject Trump’s nominee Scott Pruitt as EPA administrator. These protectors of our air, water, and climate are so worried about the threat to their agency’s mission and their lives’ work, that they aren't afraid of publicly calling out the man who could soon be their boss.

[quote position="right" is_quote="true"]The EPA needs to be able to enforce the rules when companies are breaking the law.[/quote]

“I think Pruitt will shackle us,” Sherry Estes, an EPA enforcement attorney, told Reuters. “The EPA needs to be able to enforce the rules when companies are breaking the law.”

According to Jeff Ruch, executive director of Public Employees for Environmental Responsibility in comments to the AP, this marks the first time that current EPA employees had publicly criticized Pruitt or the Trump administration, adding, “Between Scott Pruitt and the EPA workforce, you have a mutual lack-of-admiration society.”

Earlier on Monday, a group of 447 former EPA officials published an open letter to senators, urging a vote against Pruitt’s confirmation. The former employees—including regional administrators, attorneys, scientists, and librarians from both Republican and Democratic administrations—called out Pruitt’s track record as attorney general of Oklahoma, a record that reflects a chronic opposition to the enforcement of federal environmental laws, and a skepticism, if not outright denial, of the scientific consensus on climate change.

A few highlights from the three-page letter:

Pruitt’s hostility to environmental protections is unprecedented in a nominee to run the EPA, and a more complete background of his history of fossil fuel industry favors can be read in this “get to know” portrait from last month. Monday’s letter from former EPA officials recalls a scathing quote from William K. Reilly, who was head of the agency under President George H.W. Bush. Reilly told Yale Environment 360 that “(there) has never been a more explicit and opposing interpretation of the authority and responsibility of EPA by an EPA nominee.”

[quote position="full" is_quote="true"]Between Scott Pruitt and the EPA workforce, you have a mutual lack-of-admiration society.[/quote]

Last week, Democrats on the Senate Committee on Environment and Public Works boycotted a Wednesday vote, denying the committee the quorum necessary to advance the confirmation vote to the full senate. Republicans quickly changed the rules to quash the boycott, and voted unanimously to endorse Pruitt. The full senate is expected to vote on Pruitt later this week—meaning that now is a good time to call your senators and urge them to reject #PollutingPruitt.