Typos, magic numbers, big moves by China and the U.S.—it’s been a big few weeks for the treaty 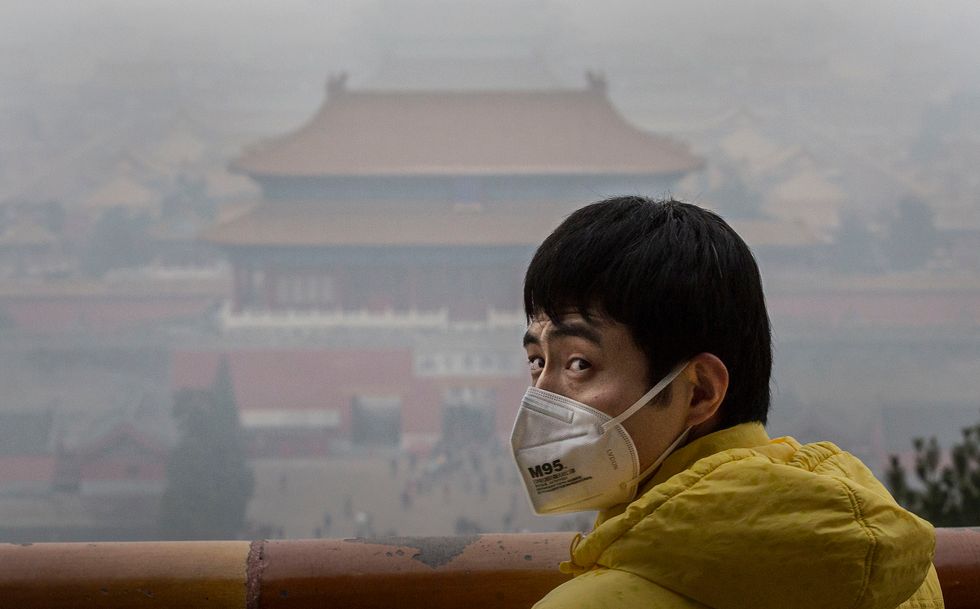 A Chinese man wears a mask to protect against pollution as he visits Jingshan Park overlooking the Forbidden City in heavy smog in Beijing, China on December 8, 2015—a few days before COP21. Image via Getty images by Kevin Frayer

On December 12, 2015, the world did something remarkable: 180 countries came together in Paris for COP21 (here’s a refresher) and agreed to fight climate change, outlined in a document called the Paris Agreement. We solved climate change and saved the planet—right?

Well, the Paris Agreement was a huge step, but just the first of many that will actually compel countries to deal with climate change. (Not that the first step was a small one: In Paris, countries only agreed at the eleventh hour after lawyers, diplomats, and scientists pored over every. Single. Word.)

In order for us to actually come close to saving the planet, there are two more steps we need to take: Signing and joining.

The Paris Agreement is not officially a legally binding document, meaning none of the 180 countries that agreed to the final text face any real penalties if they decide not to follow through on commitments to reduce carbon emissions or fund the efforts of poorer countries to adapt to the damage already done by climate change.

However, countries had the option of signing the agreement as a first signal to their citizens of their commitment to fight climate change. On April 22, 2016, a ceremony took place at the United Nations headquarters in New York to mark the moment. That day, 180 countries participated.

Among those who signed were some of largest polluters on the planet: The United States, China, India, the European Union, and Russia. A historic step to be sure, but we aren’t done yet.

Joining, or ratifying, the agreement is actually an entirely different step in the process. The document is nothing if not steeped in comprehensive, far-reaching diplomatic and legal language. And in the context of this document, climate change ceases to be a mere environmental issue—it’s political. So language choice is important.

Equally important, of course, is the science. Climate scientists argue vehemently that limiting global warming to an increase of 1.5 degrees Celsius is the ideal in order to avoid more frequent, more devastating natural disasters, droughts, floods, and climate-related environmental damage.

[quote position="left" is_quote="true"]The correction of a typo eliminated the legal need for the Obama administration to pass the Paris Agreement through Congress.[/quote]

The politicians—along with the oil, gas, and manufacturing sectors—won out in the end and countries agreed to keep global temperature increase to “well below” 2 degrees Celsius because it requires fewer cuts to emissions.

Much like estimating how many games your team must win in order to make the playoffs while taking into account competitors’ wins and losses, a magic number was calculated by those in charge: 55. That’s 55 countries, accounting for 55 percent of the world’s carbon emissions, must ratify the agreement for it to “enter into force”—that’s legalese for “officially on the books” and science talk for “how many countries have to work on reducing carbon emissions for this to have any real impact.”

So, has anyone actually joined? Are we there yet?

Some of the early joiners at the April 22 event included island nations in the Pacific and Indian Oceans like Fiji, Maldives, Seychelles, Tuvalu, and Kiribati—as well as one of the least developed countries in the world: Somalia. For the island nations, it was an obvious and quick choice: Get the ball rolling on joining or our countries will sink into the ocean as levels continue to rise. Somalia, too, had an easy decision having been historically plagued by droughts and subsequent famines.

None of these 23 countries who joined early emit large amounts of carbon—their output only makes up about 1 percent of global emissions combined—so for several months, we were still far from that magic number.

Over the summer, though, countries with larger emissions rates like Norway and Peru also joined. And the real progress came last week when the U.S. and China ratified the agreement. They are two of the largest emitters of carbon and arguably the most visible during the climate negotiations process, along with India.

As of now, 27 countries accounting for 39.08 percent of global carbon emissions are on board.

A Congress full of climate deniers won’t be a problem?

In addition to making headlines because the U.S. is one of the world’s largest polluters, the announcement was noteworthy because President Obama bypassed Congress—and he was able to do so due to a matter of grammar.

In the last moments at the COP21 venue in Le Bourget on the outskirts of Paris, the U.S. delegation realized there was a typo—small but sweeping in its implications—in the final text. The word “should” in one of the key paragraphs in the agreement needed to be replaced with the word “shall.”

Sound silly? Those of us at the conference may have thought so when world leaders spent nearly two hours at the very last moment correcting the document, fearing further objections on seemingly small matters.

But the word “shall” would have legally obligated wealthy countries to cut carbon emissions, while “should” merely implies that these countries will try to do so. With “shall,” the Obama administration would have needed to submit the Paris Agreement to the Senate, as with prior global treaties. There, it would surely have died in the process—or at the very least, stalled for years beyond Obama’s time in office.

In Paris, the UN stressed the importance of “entering into force” by 2017. The process to transition global economies away from fossil fuels is complicated and will take years—not just because of politics, but everyday practicalities like stemming job losses by retraining people so they have “greener” skills, scaling up renewable energy alternatives by building new infrastructure, and finding the money to help developing countries adapt to all the climate damage that they are already facing.

[quote position="left" is_quote="true"]For the island nations, it was an obvious choice: Get the ball rolling or our countries will sink into the ocean. [/quote]

According to experts, we are on pace for at least 31 countries to join by the end of the year, accounting for 58.4 percent of global carbon emissions. But India, Russia, the UK, and the European Union will need to join in order to attain the required 55 percent and 55 countries.

If we reach the magic number by October 2016, we could see the first meeting of the Parties to the Paris Agreement—giving us a fun new acronym, CMA1—as early as November 2016. That’s when the next round of climate talks, COP22, will take place in Morocco. There, matters of finance and new programs will be discussed.

If we don’t reach the magic number in time, CMA1 will have to happen in 2017.

The big question for the moment is how to encourage wealthy countries to pledge $100 billion in annual funding by 2020 with a promise to continue funding beyond that, to help poorer, developing nations. But if a country full of climate deniers and a manufacturing juggernaut can join a deal to save the planet, anything is possible.