Why a divorced father still buys his ex flowers on her birthday, and does it with pride.

He breaks down his reasoning perfectly. 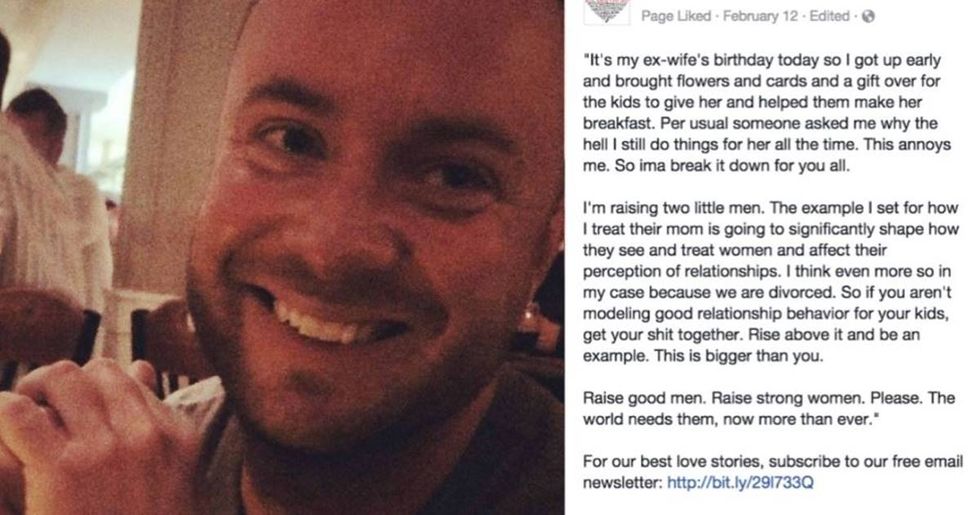 There is no way to shield a child from the pain of their parents’ divorce or preventing them from dealing with psychological issues down the road. But effective co-parenting by former spouses can go a long way towards creating the best of a bad scenario.

Researchers believe that children of divorce benefit when their parents treat eachother with respect.

“Parents need to remain parental,” clinical psychologist, Valerie Hale, told The Desert News. “They need to stay the grownups, and that’s hard to do when they are in one of the most difficult periods of their lives.”

“Always put the children first,” Hale continued, “even when you are angry or distressed at what the other parent is doing or saying. “Your conflicts should never be bigger than your children’s needs.”

Billy Flynn, the divorced father of two boys, is a great example of how a father can put his children’s needs first. He went out of the way to celebrate his ex-wife’s birthday and had no problem posting about it on Facebook.

“It’s my ex-wife’s birthday today so I got up early and brought flowers and cards and a gift over for the kids to give her and helped them make her breakfast.

Per usual someone asked me why the hell I still do things for her all the time. This annoys me. So ima break it down for you all.

I’m raising two little men. The example I set for how I treat their mum is going to significantly shape how they see and treat women and affect their perception of relationships. I think even more so in my case because we are divorced.

So if you aren’t modelling good relationship behaviour for your kids, get your shit together. Rise above it and be an example. This is bigger than you.

The post quickly went viral and has been shared almost 120,000 times and earned nearly 220,000 reactions.

While some men completely missed the point.

To clarify his views and address the criticism he’s received, Flynn elaborated on his views to USA Today.

“I’m not advocating that everyone should or even CAN do what I do. My kids like making Mom breakfast on her birthday, so I shop for them and help them make it and leave. That's their breakfast with Mom, I'm just a facilitator. Every case is different, depending on the relationship and the boundaries you have set with your ex and their new partner, if they have one. The details of what you do aren't important.

The message behind it is: You’re an example. Little ones don’t have the resources an adult has, but they still want to show love and appreciation for their parents. Setting aside your differences to facilitate that and set an example without negativity is the point, not making breakfast. People miss the forest for the trees on this one. Whether it's taking them shopping for a card on her birthday or helping them hand-make something on Mother’s Day, you have a chance to join and encourage their affection to an important person in their life.

Parents are god-like figures in a child’s life. How you act toward this important person will leave an impression right now and for their future, whether you like it or not. Kids don’t need to know your resentment or interpersonal issues with your ex, that’s selfish. They aren’t your personal sounding board or therapist. They are too young to comprehend the issues, but they aren't too young to sense anger and resentment and they don’t know what to do with that. It’s confusing. You have to set it aside.

We can pretend Santa is real for them, why can’t we pretend Mom and Dad still value each other and care to treat each other with respect? It's even more important! They look to you as an example of how to behave, of how to be, of what is acceptable in relationships - and ultimately, that's the bottom line. Actions speak louder than words. It doesn’t matter what the other person does or doesn't do. You can't control that. But you CAN control the behaviors and values you demonstrate for your children.”