Gunmakers Get Special Economic Protection – And They Have George W. Bush To Thank For It

The gun industry has congressionally backed immunity from liability. 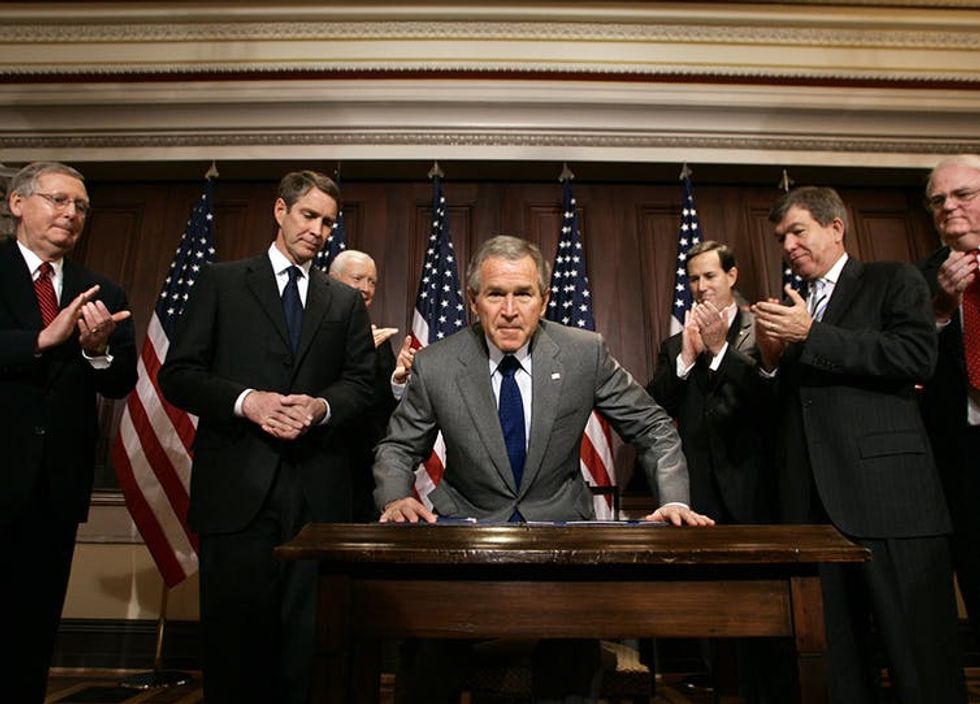 A Connecticut State Police detective holds up a Bushmaster AR-15 rifle, the same make and model of gun used by Adam Lanza in the Sandy Hook school shooting. Photo by Jessica Hill/AP.

The gun industry is one of very few industries to have congressionally backed immunity from liability. As a result, it’s been largely shielded from responsibility for the deaths and injuries its products cause with few exceptions.

How did this happen? And, in the aftermath of another tragic mass shooting, could this protection ever be overturned?

As an expert in constitutional law and product liability, I believe the answer to these questions lies in examining the economic and political clout of the gun industry.

Gun industry gets a protector

The gun industry acquired its protective shield in 2005 after a wave of lawsuits by cities threatened gun companies’ survival. New Orleans was one prominent government that filed a lawsuit against gun manufacturers in 1998. More than 30 other American cities and counties soon followed.

The suits, prompted by the growing epidemic of urban gun violence and patterned after claims brought by states against tobacco companies, initially succeeded in shining a spotlight on the industry. I was one of the lawyers at the Brady Center to Prevent Gun Violence who helped put these cases together. They uncovered evidence about how gun manufacturers could reduce risks by making changes in the way they design and distribute their products.

But then came the Protection of Lawful Commerce in Arms Act, which gave gunmakers special immunity from legal responsibilities and blocked most of the claims. While Congress has occasionally limited the liability of companies making other products, such as medical devices and small aircraft, the degree of protection given to the gun industry was unusual and didn’t create alternative ways to regulate the industry and compensate those injured as it did with the makers of childhood vaccines.

Now a string of recent mass shootings, from Orlando to Las Vegas to Parkland, has brought renewed scrutiny to the gun industry’s products and practices.

It comes at a time when the firearms industry has enjoyed remarkable growth. In an unintended and sadly ironic way, the mass shootings actually contribute to the industry’s financial success.

Gun sales are strongly correlated to prospects for gun control and surge whenever it seems more likely that new legal restrictions on guns may be imposed. And this was the case in 2008, when the election of Barack Obama rejuvenated the then-stagnant industry. Fearful that Obama would take away their guns, many Americans rushed to stock up on new weaponry. Production of firearms rose steadily during Obama’s first term, even though he did virtually nothing at that time to advance a gun control agenda.

The massacre at Sandy Hook Elementary School shortly after Obama won re-election in 2012 drove gun sales to unprecedented levels, with production reaching an all-time high of nearly 11 million in 2013 — yielding more economic clout than ever before.

The industry’s economic impact rose from $19 billion in 2008 to over $51 billion in 2016 according to the National Shooting Sports Foundation, the firearms industry’s trade association. And its impact is felt across the country in both red and blue states and politically important ones, from Texas and California to Florida and Ohio. Some of the nation’s oldest and largest gun companies are still based in the legendary “ Gun Valley” region of New England, but there are other manufacturers scattered around the nation. Wholesale distributors and retail dealers operate virtually everywhere.

The number of jobs supported by the industry nearly doubled to about 301,000 in that period, with the largest totals in Texas and California. The taxes paid by the industry have increased even more dramatically.

President Bush sits down to sign the Protection of Lawful Commerce in Arms Act, which shielded the firearms industry from civil lawsuits brought by victims of gun crimes. Photo by J. Scott Applewhite / AP.

Gun companies have made it clear they are willing to relocate their operations if the price is right, and state and local governments have thrown millions of dollars in subsidies and tax breaks at them in recent years. For example, Remington Arms shifted much of its manufacturing from New York to Alabama a few years ago, drawn by $68.9 million in government handouts as well as displeasure with New York’s enactment of tougher gun laws.

The industry has used this growth in wealth, employment, and taxes to exercise its political muscles at the state and national levels. The trade association’s annual lobbying expenditures, which were negligible before Obama’s election, soared after Sandy Hook to more than $3.3 million in 2017.

Its biggest political influence comes through its customers, who are a uniquely potent force. The National Rifle Association spends over 50% more on lobbying than the gun industry and nearly 10 times as much as any gun control group.

And while the industry’s interests are usually aligned with those of the NRA, even when a gunmaker wants to take a softer position on gun policy, it’s extremely risky to do so. A case in point came in 2000, when Smith and Wesson tried to ease the burden of the lawsuits against it by agreeing to be more careful in how it designed and distributed its products as part of a settlement agreement. Its modest steps prompted boycotts by gun owners that nearly destroyed the company in a few short months.

The question now is, can the increasing frequency of tragedies like Parkland and the resulting raw youth outrage turn the tables on the gun industry?

Applying financial pressure is one way to get the industry’s attention. Several years ago, a coalition of organizations began a divestment campaign, encouraging people to move their savings out of mutual funds that invest in gun companies. Fund managers say the campaign is having its intended effect, with more investors demanding that funds dump gun stocks. According to one study, the amount of assets precluded from being invested in companies that make weaponry for military or civilian use has increased 1,042% since Sandy Hook. This campaign is cited as a factor that led to the bankruptcy of Remington, the maker of the AR-15 rifle used in that shooting.

The idea has recently gained new momentum. Legislators in New Jersey and teachers in Florida are now calling for public employee pension funds to sell their shares of firearms companies. Other socially conscious investors are keeping their shares and using them as a channel to express concern. Shareholders of companies that make or sell firearms, like Sturm Ruger and Co. and Dick’s Sporting Goods, have called for gunmakers to explain what they are doing to reduce the risks posed by their products.

Americans fed up with the NRA’s intransigence have also begun putting pressure on a wide range of businesses to cut ties with the gun rights group.

What the future holds

Preventing some NRA members from getting a discount on a car rental or airline flight is obviously not going to bring the gun lobby to its knees or lead to a repeal of the industry’s immunity. But every small step brings attention to the issue and builds the pressure that will eventually change the political calculus for legislators.

A large majority of Americans support the enactment of stricter gun laws, but the crucial question will be whether the intensity of their feelings about the issue ever match the passion of those who fiercely favor gun rights.

Change will happen if enough people make it clear that their preference for stronger regulation of firearms is something that affects how they spend their money and how they cast their votes.