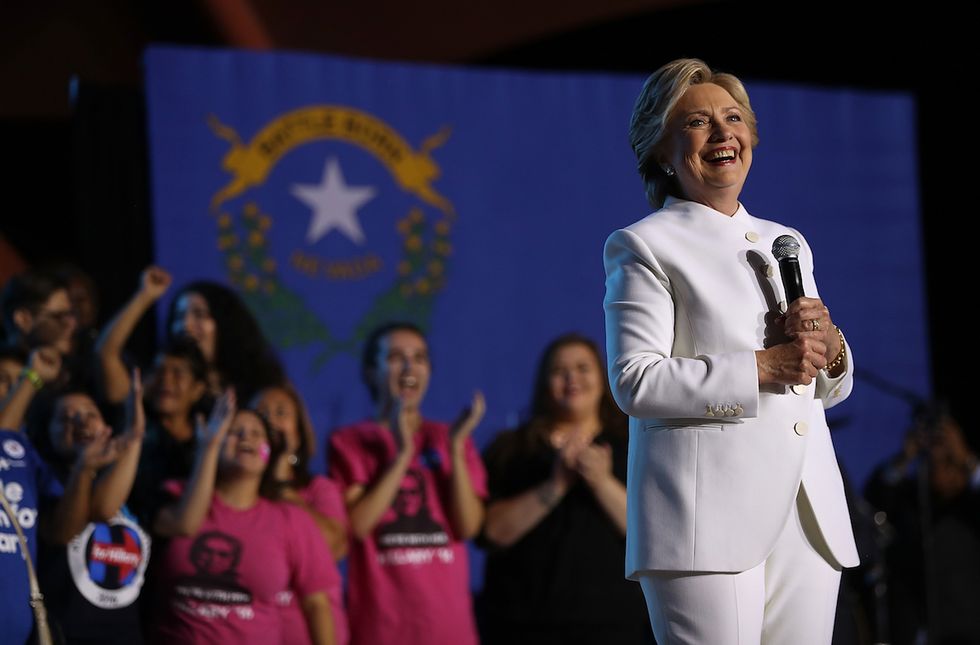 Hillary Clinton at the third and final 2016 presidential debate in Law Vegas. Image via Getty images.

Over the past several years, Hillary Clinton has transformed her signature pantsuit—a loose-fitting jacket that runs to the mid-thigh, paired with lightly tapered pants—into a rallying cry for female empowerment. In early October, a pantsuit-clad flash mob popped up in New York City’s Union Square, dancing to a Justin Timberlake song in a show of support for Clinton. And on the Friday before the election, Beyonce and her backup dancers took the stage donning pantsuits during a pro-Clinton concert.

[quote position="left" is_quote="true"]On women, pants play to society’s fears about what happens when women decide what it means to be feminine.[/quote]

The ensemble, however, has a controversial history, and Clinton’s clothing choice hasn’t been bereft of criticism. “Hideous,” “unflattering,” “unfeminine”—these are just some of the insults lobbed Clinton’s way since she started regularly wearing them about a decade ago.

As a historian of women and clothing, I see Clinton’s pantsuit—and those who criticize it—as the latest chapter in a long history of people telling women what they can and can’t wear.

Why does the pantsuit rankle so many Americans?

Women’s appropriation of men’s clothing should be ho-hum in an age of unisex fashion trends and boyfriend jeans. But the line between “his” and “hers” took centuries to build and will take more than a female presidential candidate to dismantle.

People seem to hate the pantsuit because it includes, well, pants—which happen to be one of the most controversial garments in women’s clothing. Skirts (whether worn on their own or as part of a dress) obscure the female form, leaving one to wonder, “Hey, what’s underneath there?” But pants—traditionally a man’s garment—leave little to the imagination. On women, pants take away all of the subtlety that Western society has valued in female dress for hundreds of years. They play to society’s fears about what happens when women dress themselves and decide, on their own, what it means to be feminine.

True, since the early 1900s, there have been female artists, models, hikers, farmhands, and women’s-rights advocates who wore pants for practical or political reasons. But the infiltration of pants into women’s wardrobes happened in the slow-yet-unrelenting way that cultural norms change. It was a wearer-driven movement that started with the young.

First there was the resort-based craze for beach pajamas in the late 1920s, which was followed by the growing acceptance of dungarees at elite, Northeast women’s colleges in the 1930s. War work required women to wear pants in the factory, nursing classes, or victory gardens. Then suburban moms took to tailored pants for daytime activities and informal socializing.

Finally, by the early 1960s, clothing designers decided to give women what they actually wanted—pants—but in a more formal incarnation: the pantsuit.

In 1966, couturier Yves Saint Laurent offered up Le Smoking, an ensemble that played upon a decades-long tradition of avant-garde women in tuxedo-inspired garments. Despite endorsement from fashion’s heavy hitters, socialite Nan Kempner was thrown out of Manhattan’s Le Cote Basque for wearing it. Women in pants still had no place at formal dining establishments.

Turning criticisms into a calling card

Today, pantsuits are a formal garment worn to the office or social events. (You’d be hard-pressed to attend a wedding and not see a woman in a pantsuit.) As Clinton unabashedly admits, pantsuits are practical and comfortable—two things that women’s clothing, historically, haven’t been.

And Clinton is all pantsuits, all the time. Sometimes her jackets have round collars or half collars or midsize lapels. Sometimes they are bright orange or teal—or white, as in the last debate. Often, they are the work of the late Oscar De La Renta or Nina McLemore.

In a pantsuit, Clinton always looks professional and put together. But that hasn’t stopped the comments about her being tired and overweight or her belly being too puffy or how she seems “grandmother-ish.” Nonetheless, Clinton has instead turned the ensemble into her sartorial calling card and has embraced the jokes rather than ignoring them.

She has turned critics’ scoffs into further proof that women’s appearances are always up for dissection—even at the top of the political pyramid. Rather than diversify her public wardrobe or whipping out some of the dresses she wore as first lady, Clinton clings to the pantsuit.

The panning of the pantsuits should have hinted at some of the backlash a female candidate for president would face. Indeed, Clinton’s body is central to how her opponents view her. Meanwhile, women’s appearances and bodies emerged as a key issue of this presidential race.

You don’t have to be a professor or a working mom or even a female to get behind the message of Clinton’s pantsuit. You just have to be sick of pretending that our society has moved beyond “liking” or “disliking” women by how they look or what they wear.