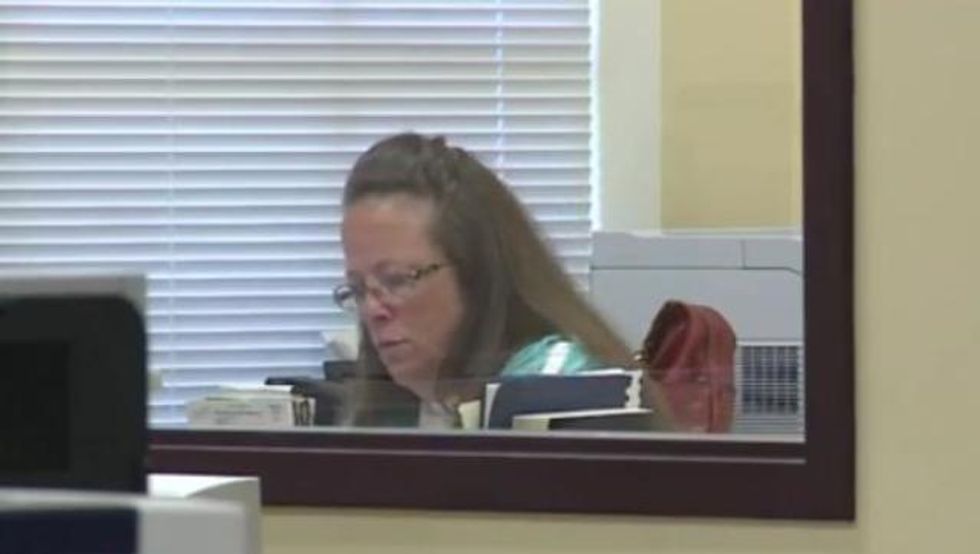 Sometimes, the world hands you such a delicious piece of irony you can barely open your mouth to swallow it. Earlier this year, Kim Davis, the antigay Kentucky county clerk who’s still refusing to marry same-sex couples, made a bit of a mistake. According to The Courier-Journal, she signed off on the marriage of Alexis Colen, a pansexual woman, and Camryn Colen, a transgender man who she believed to be a cis man. She simply had no idea.

The situation has escalated rapidly in Rowan County, Kentucky, a tiny county of approximately 139,000 people. Davis, who’s now ignoring Supreme Court orders to issue same-sex marriage licenses, inspired the couple to come out with their story. As Alexis told the Courier-Journal, “Stuff has just escalated and gotten ridiculous, and we decided that we were going to come forward with it.” In an interview with The Ashland Independent, she added, “We’re going to prove to Kim Davis that she can’t judge a book by its cover.”

Camryn began to transition in 2010, changed his name in 2013, but never altered his birth certificate. But at the time of their marriage, Davis didn’t bother to ask for his, and simply accepted Alexis’. Through a wonderful bureaucratic error, the license was issued. And while Davis has remained defiant about gay marriage, sometimes, nothing feels better than small acts of unintentional justice. Check out The Courier Journal's original video below.