Republican who attacked Ilhan Omar said he was ‘too busy’ to speak with 9/11 survivor. 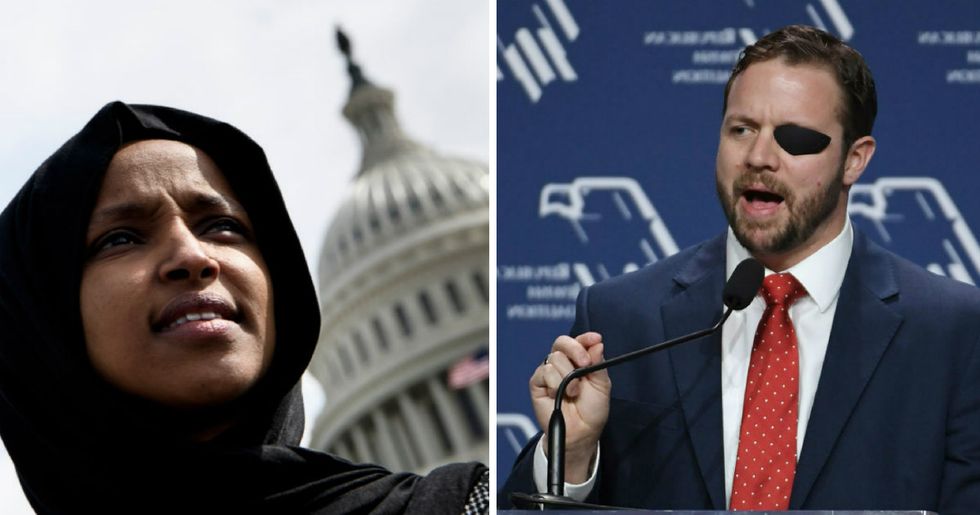 Here are two facts worth considering:

Rep. Ilhan Omar (D-MN) is a co-sponsor of the Victims Compensation Fund, renewal a bill infamously stalled in Congress that would extend health care insurance to survivors of the terrorist attacks of September 11, 2001.

Rep. Dan Crenshaw (R-TX), has so far refused to sponsor the bill.

So, it’s a bit ironic that Crenshaw has been questioning the patriotism of Omar after the first-term congresswoman drew some much-deserved criticism for describing the terrorists who perpetrated 9/11 as “some people who did something.”

That’s because a FDNY veteran who survived the terrorist attacks said that he recently attempted to speak with Crenshaw about supporting the VCF, only to be told the congressman was “too busy” to speak with him about legislation that could save the lives of thousands.

“He really didn’t want to talk to us,” Rob Serra, who is wheelchair-bound because of the injuries he sustained on 9/11, told the New York Daily News. “He said he didn’t have any information and that his staff would take care of it.”

This isn’t some partisan attack, either. Serra said Omar was wrong to describe 9/11 in such a dismissive tone but he also astutely pointed out that actions speak louder than words. And in this case, Crenshaw is choosing to place empty attacks on social media over supporting a real bill that could honor the lives lost while doing something meaningful to assist those who still need help from their injuries and health challenges nearly two decades later.

First Member of Congress to ever describe terrorists who killed thousands of Americans on 9/11 as “some people who… https://t.co/fZmyD9cqwF
— Dan Crenshaw (@Dan Crenshaw) 1554831909.0

“I think it’s highly insensitive to describe what happened on 9/11 that way,” Serra told the Daily News. “(Crenshaw) is the wrong person to be making that criticism, though. He’s certainly not showing his support."

Although as The Washington Post points out, Omar’s comments have been taken out of context. She’s certainly been guilty of making insensitive and highly questionable remarks in recent times but these comments were clearly more targeted at the importance of The Council on Islamic Relations (CAIR):

“For far too long we have lived with the discomfort of being a second-class citizen and, frankly, I’m tired of it, and every single Muslim in this country should be tired of it,” Omar said. “CAIR was founded after 9/11 because they recognized that some people did something and that all of us were starting to lose access to our civil liberties.”

Still, that debate absolutely pales in comparison to the lives on the line, the heroes who stood up for their fellow citizens on the day America was attacked. Omar has put her voice behind supporting the VCF and Crenshaw has not. Those are simply the facts.

As of today, the VCF is continuing to run out of money. NPR reported in February that payout claims have been reduced by as much as 70 percent while members of Congress, led almost entirely by Republicans like Crenshaw, continue to stall movement on the fund.