“At some point, we have to stand up for the people who have always stood up for us … What Rand Paul did today on the floor of the Senate was outrageous.” 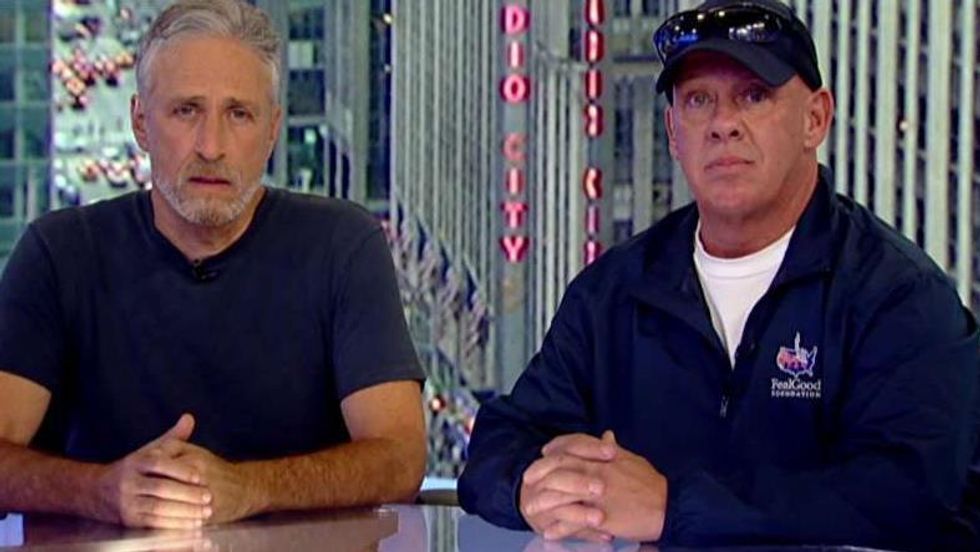 After the major controversy surrounding Congress’ refusal to renew the September 11th Victim Compensation Fund, the Democratically-controlled House finally moved forward on the long-stalled bill. Even Senate Majority Leader Mitch McConnell promised the bill would make its way through the Republican-controlled U.S. Senate without delay. Instead, Sen. Rand Paul (R-KY) has blocked the passage of the bill saying it must be offset by spending cuts to other programs:

"It has long been my feeling that we need to address our massive debt in the country," he said. "And therefore any new spending … should be offset by cutting spending that's less valuable. We need to, at the very least, have this debate."

“Bret, this is about what kind of society we have,” a clearly furious Stewart continued. “At some point, we have to stand up for the people who have always stood up for us, and at this moment in time maybe cannot stand up for themselves due to their illnesses and their injuries. And what Rand Paul did today on the floor of the Senate was outrageous.”
“He is a guy who put us in hundreds of billions of dollars in debt,” he said of Paul. “And now he’s going to tell us that a billion dollars a year over 10 years is just too much for us to handle? You know, there are some things that they have no trouble putting on the credit card, but somehow when it comes to the 9/11 first responder community—the cops, the firefighters, the construction workers, the volunteers, the survivors—all of a sudden we’ve got to go through this.”

Jon Stewart may have left “The Daily Show” behind several years ago but he continues to serve as an unofficial ombudsman of American decency.

And that role is no better defined than in Stewart’s continued advocacy on the behalf of 911 survivors and the families of victims.

Stewart has been beating the drum, using his celebrity and influence to pressure Congress into renewing the 911 Survivors Fund, which helps provide medical support for people affected by the terrorist attacks of September 11, 2001. And after straight up giving it to members of Congress for their disgraceful refusal to renew the bill, a House panel finally took action this week.

According to The Press Herald: “The $7.3 billion fund has paid about $5 billion to roughly 21,000 claimants. About 700 were for deaths that occurred long after the attacks.” Upwards of 19,000 claims remain unpaid.

The bill passed the House Judiciary Committee unanimously and is expected to pass the now-Democratically controlled House before heading over to the U.S. Senate, where it faces a far less certain fate under the Republican controlled body. Senate Minority Leader reacted to the House vote by imploring Senate Majority Leader Mitch McConnell to take action:

“We will reach the point soon, most likely this year, when more will have died from 9/11-related illnesses than on 9/11 itself,” Schumer said. “I say to Leader McConnell: this is not politics. This is not a game. These are our heroes, American heroes, who are suffering and need our help. . . . I am imploring, pleading, even begging to Leader McConnell, to put the bill on the floor immediately after it passes the House.”