Should children clean their own schools? Japan thinks so.

Japanese parents and educators say the children are learning to respect their surroundings. 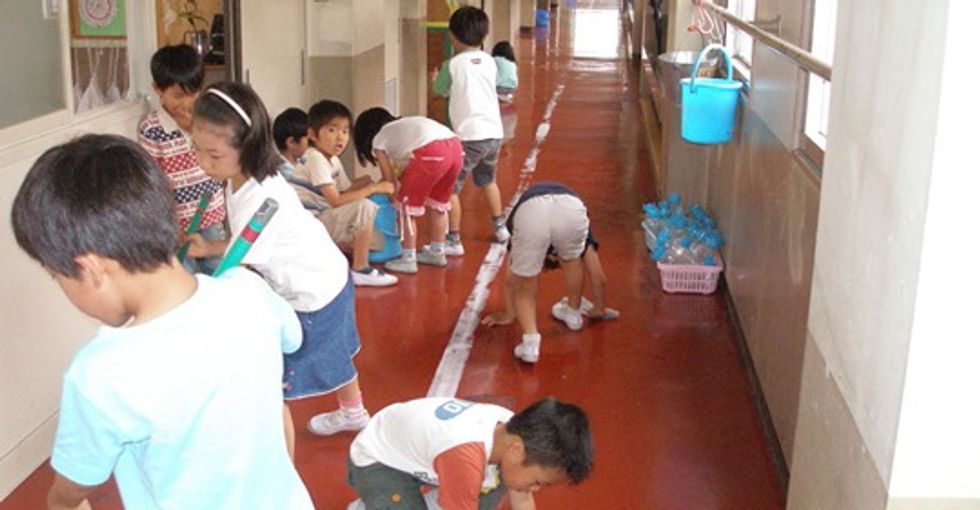 Many Japanese schools don’t hire janitors or custodians in the traditional American role, and much of the school cleaning is done by the children themselves.

One of the traditions of Japanese education is that students do o-soji (cleaning). It’s one of the few things non-Japanese tend to know about Japanese schools. Unfortunately, many of us tend to get the details wrong.

One of the traditions of the Japanese education system is that students do o-soji (cleaning). However, it’s been in print more than once that Japanese schools have no janitors because students do all the cleaning. That’s simply not true.

Japanese schools have non-teaching staff called yomushuji, or shuji for short. They have many responsibilities, including serving as crossing guards when school lets out, but their main job is cleaning and maintenance. That’s a good thing, too, when you take a moment to think about. Schools definitely need adults to mop things up after the children finish cleaning.

At a typical school, o-soji starts after lunch and lasts 20 minutes, after which the children are set free for recess. This happens four times a week (they don’t clean on Wednesday or Saturday). On the last day of each semester, there is a longer sprucing-up called osoji (big cleaning). Throughout cleaning time, the public announcement system blasts cheerful marching music (“the o-soji song,” or some rousing classical music).

Every class is responsible for cleaning its own classroom and two other places in the school, for example; the nurse’s office and the library. The class is divided into han (small groups), each of which is responsible for one of the areas to be cleaned.

There is one assignment you may find really sweet and typical of the attention to human relations at Japanese schools: A group of sixth-graders is sent to each first-grade classroom to help the little ones clean.

Many schools provide this kind of interaction between the upper and lower grades because so many Japanese kids are hitorikko (only children, i.e., they have no siblings). Teachers believe older students need to experience helping younger children. And little children need older role models.

Three times a year, students in third grade and above do chiiki seiso (neighborhood cleanup). The school has an arsenal of child-size brooms and dustpans that are brought out for the event. The children put on cotton-knit gloves called gunte, and head out to pick up trash in the neighborhood around the school.

Not all schools bother with neighborhood cleanups anymore. News reports say littering by Japanese teenagers is on the increase. A commentator on the news suggested that more middle and high schools should organise chiiki seiso. If teenagers had to pick up trash around their school, maybe they’d think twice before littering, he said.

Schools vary in how much emphasis they put on o-soji. Some schools draws the line at the toilets, which are cleaned by the shuji, not the students. While at other schools, fifth- and sixth-graders get latrine duty.

It can be hard for non-Japanese to grasp why children should be cleaning at school. With all the concern about falling academic achievement, shouldn’t they be using that time for learning?

This article originally appeared on BrightVibes. You can read it here.