Jennifer Lawrence explains why government corruption is the biggest issue of our time.

This is how we make politicians start working for us. 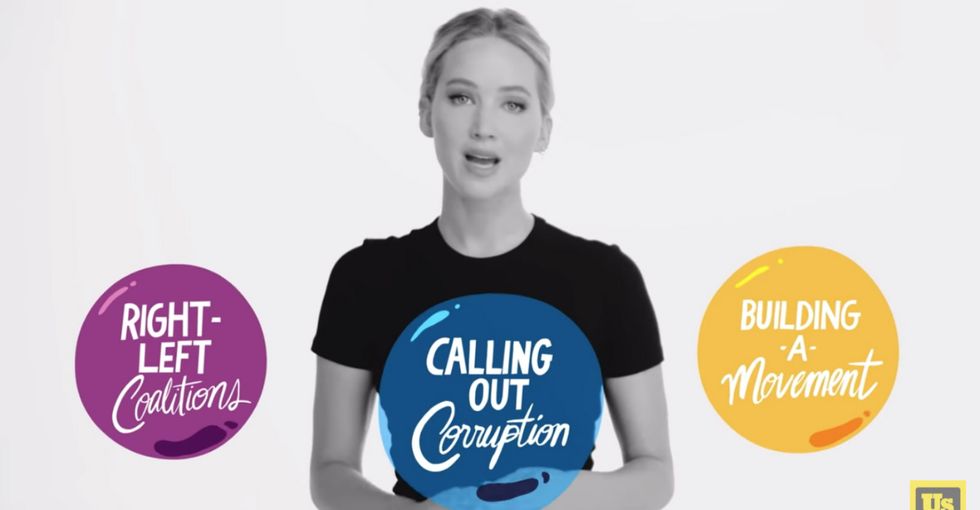 This might be the one celebrity video about politics that actually matters. In a new video with Represent.us co-founder Josh Silver, Jennifer Lawrence breaks down why government corruption is the most important issue of our time, regardless if you’re a Democrat, Republican or independent.

The whole video is fascinating but there are two big takeaways if you don’t have time to watch the whole thing:

You can watch the whole video below:

Lawrence and Represent.us are promoting the “American Anti-Corruption Act,” which they say is supported by nearly 90 percent of people who were asked about the proposal in a poll. If enacted, the anti-corruption legislation would

It’s an incredibly ambitious project but it’s not unrealistic. Much like marriage equality, there’s a tipping point both in the culture and government where when there’s enough local support for an issue, the federal government finally gets involved and passes laws to help bring our politics more in alignment with the culture.

As Lawrence explains in the video:

Politicians spend up to 70% of their time raising money while in office. In order to win a seat in the Senate in some 2018 races, you would have had to raise $45,000 every day, 365 days a year for six years to raise enough money to win. Considering that only .05% of Americans give more than $10,000 to candidates, it is no wonder that politicians turn to special interests and billionaires to fund their campaigns – which so often sways how a politician votes for a particular law or proposes them. It is a corrupt system in which we the people have near zero influence over our own government. That is not only sad, it’s also affecting nearly every other issue Americans care about, from the economy to the debt; healthcare to education.

If you want get more involved as a volunteer, to donate, or simply to learn more, check out Represent.us for more information.