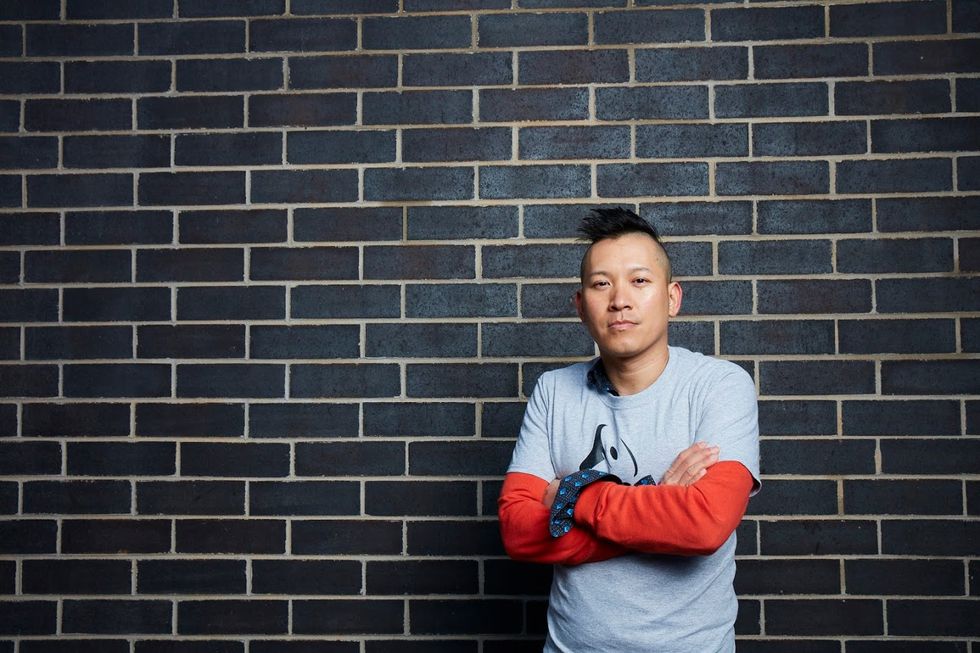 These are just some of the adjectives used to describe Lam Nguyen Ho, Executive Director and Founder of the Community Activism Law Alliance (CALA) by board member and partner Thomas Alaan Lipsmeyer in his KIND People nomination submission. Lam is one of seven winners across the country being recognized by The KIND Foundation—a 501c3 started by KIND Healthy Snacks. The Foundation is awarding $1.1M to these individuals who are championing inclusivity and serving as beacons of empathy in communities nationwide. Over the next few weeks, GOOD will be telling select winners’ stories in an effort to elevate kindness and its transformative power.

Lam’s organization, CALA, works strictly in underserved communities providing legal assistance to immigrants and low-income families who otherwise would not have access to legal counsel. The team works to obtain green cards for undocumented immigrant survivors of brutal domestic violence, laborers, and sex workers who are fighting to keep or get back their children.

During the 2008 financial crisis, the economic downturn meant significantly less funding for legal aid. Lam realized he needed to do things his own way. “In some ways I was compelled, if not coerced into creating CALA so that I can do the work that I believe needed to be done in order to help the people that I believe need to be helped.”

While Lam credits the state of legal aid in Chicago for compelling him to start CALA, a trip down memory lane revealed several foreshadows of the future Lam would have. An immigrant boy who arrived in the United States from Vietnam with his parents when he was just six years old, Lam witnessed the atrocities of legal counsel from a young age, as his mother, a victim of domestic violence who did not speak English, was threatened with deportation if she didn’t sign the divorce papers his father presented her. “Today we know that was completely false,” he says. “There is no way that she could’ve been deported; she was a green card holder. But she signed the agreement. Despite being the head parent in our household, my mother lost everything.”

“That was the moment when I decided that I wanted to be a lawyer,” he continued, “because I never wanted whatever happened to my mother to happen to anyone else. All this happened when I was 10, 11 years old, so since a very young age I had envisioned myself as a lawyer. Someone who could use the language of the law to bring balance.”

While Lam’s submission paints a picture of a truly kind individual—he shies away from calling himself kind. “I’m not sure if I think of myself as a kind person,” he says. “I think of myself as an extraordinary courageous person. I see my mother, and my elementary school friends; I see even my high school classmates and I see the challenges that they had to face and the challenges they continue to face.” Lam does agree though that he possesses some key traits of kindness: compassion, integrity, conscientiousness, and fairness. “I don’t think that I would be where I am today if it weren’t for a lot of luck and a lot of people who really have helped me. I describe myself as someone who is grateful and feels a sense of responsibility.”

From Ms. Barbara Pena, the teacher who taught him English and took care of him whenever he had an accident at school, to the family members and friends in his community who have been through tremendous obstacles, Lam credits those acts of kindness to his path in life today. “I just felt relief that there was someone to help me from the fears, humiliation, and shame,” Lam remembers. “Everything seemed so hard and painful, so it almost felt like Ms. Pena was rescuing me from drowning. I just felt like I was gasping air. It was only later, when I had overcome much of the adversity, that I fully realized how much I owed her—the enormous gratitude and appreciation.”

Lam speaks of Ms. Pena’s kindness as if she were a saint. He now feels a sense of responsibility and a duty to pay by helping other children and families in need.

At a time when the country could use a bit more kindness, Lam offers this bit of advice: “Look around the world, outside the safety and comfort of your routine, to see how much pain and suffering exists in 2016. When that much brutality is staring you in the face and you see it with your own two eyes and feel it within your heart, only a fool doesn't seek to change it. Kindness is such a powerful force, it’s the core of so much good. We need to help people learn about kindness and its potential to change the world.”

The KIND Foundation, a separate 501c3 established by KIND Snacks, recently sought nominations for KIND People—individuals transforming their communities through kindness. Nearly 5,000 nominations were submitted, which proves kindness is thriving nationwide. Seven KIND People winners were selected, and The KIND Foundation is now distributing a total of $1.1MM in prizes to further their good work. These awardees are ordinary giants who have united their communities through selflessness and service. They inspire us to lead with empathy, forge an inclusive society, and live a life of purpose. Over the next few weeks, GOOD will be telling select winners’ stories in an effort to elevate kindness and its transformative power. Lam Nguyen Ho will use his $100,000 prize to purchase a house for his mother, as well as to hire a junior attorney for CALA to reach more people in the neighborhoods they work.

Top photo: Lam on the streets of Chicago. Middle photo: A smiling Lam Ho. Both photos by: Poon Watchara-Amphaiwan