Mike Pence Refuses To Dine With Women Other Than His Wife, And That’s A Huge Problem 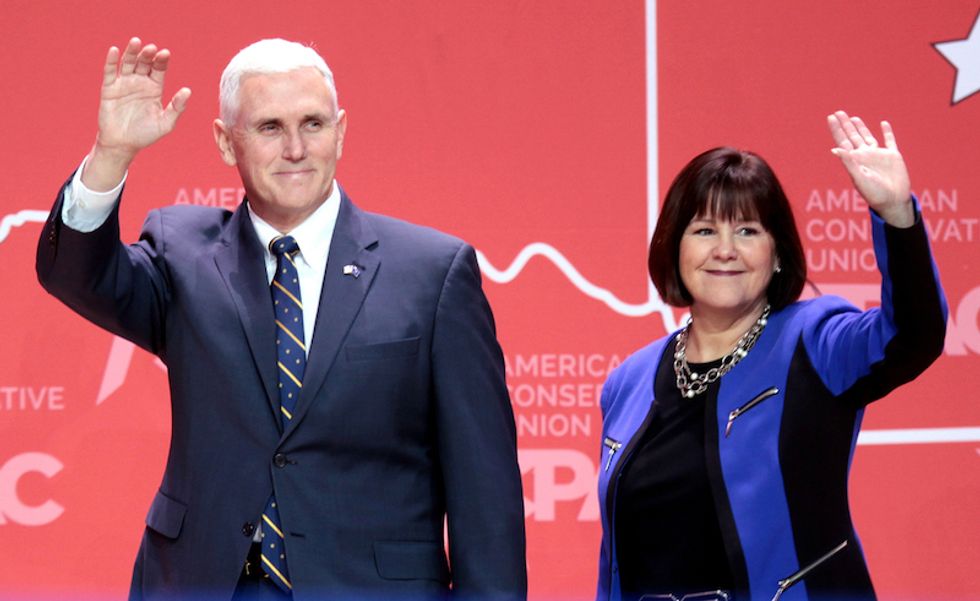 Vice President Mike Pence has maintained a fairly low profile since taking office in January alongside President Donald Trump. Perhaps it’s because of his boss’s antics that Pence has been able to fly under the radar, but a new in-depth profile of his wife is changing all that.

Earlier this week, The Washington Post published a lengthy profile of Karen Pence, Vice President Pence’s wife of 32 years. In it, reporter Ashley Parker explores the deep connection the Pence’s have, both in their marriage and in their faith. One small detail in the feature has caught the attention of everyone: Vice President Pence will not dine with any woman alone, except his wife. Ever.

Mike Pence never dines alone w a woman not his wife, nor does he attends events w alcohol, w/o her by his side. https://t.co/BxfS0JzbAc
— Ashley Parker (@Ashley Parker)1490798065.0

Parker and others have noted that the “no dining alone” rule, along with the mandate that Mike Pence can never attend an event where alcohol is served without his wife present, is because of their strong evangelical Christian faith. As Pence said in a 2002 interview with The Hill, the rule was part of “building a zone around your marriage… If there's alcohol being served and people are being loose, I want to have the best-looking brunette in the room standing next to me.”

And as the Indianapolis Star additionally reported:

During his 12 years in Congress, Pence had rules to avoid any infidelity temptations, or even rumors of impropriety. Those included requiring that any aide who had to work late to assist him be male, never dining alone with a woman other than his wife, and not attending an event where alcohol is served unless Karen was there.

The reaction to the personal marriage mandate was swift on social media, with conservatives applauding Pence for his strong values. But here’s the thing, he’s not just a guy in your hometown who doesn’t want to be seen as a creep dining with women who aren’t his wife, he is the second in command of the entire free world.

This rule means he will not eat with staffers, with fellow female politicians, with Ivanka or Melania Trump, or even with other female world leaders. While you may be shocked at the idea that it’s 2017 and men still act like all women only show up to incite a man’s nether regions, what will shock you even more is the fact that Pence isn’t alone in his “no women allowed at the dinner table” rule.

As The Atlantic reported, a 2015 anonymous survey of female Capitol Hill staffers conducted by National Journal found that “several female aides reported that they have been barred from staffing their male bosses at evening events, driving alone with their congressman or senator, or even sitting down one-on-one in his office for fear that others would get the wrong impression.” And that fear of sending the wrong impression is exactly why pictures like this happen:

Moreover, The Atlantic added, a 2010 Harvard Business Review research report found this sexist practice of excluding women from meetings goes far beyond politics and into business with “many men avoid being sponsors—workplace advocates—for women ‘because sponsorship can be misconstrued as sexual interest.’”

Because of this refusal, the Harvard report noted, women often miss out on promotions and the ability to earn a higher salary, thus perpetuating the wage gap even further. “The research is irrefutable,” Kim Elsesser, a research scholar at the UCLA Center for the Study of Women, said in the Los Angeles Times, “Those with larger networks earn more money and get promoted faster. Because men typically dominate senior management, there’s evidence that the most valuable network members may be men.”

This rule will, without question, stop women from excelling in the workplace that is the White House. As Mother Jones Editor-in-Chief Clara Jeffery wrote in a Twitter thread:

“If Pence won’t eat with a woman alone, how could a woman be Chief of Staff, or lawyer, campaign manager, or… Would Pence dine with Ivanka? Or KellyAnne? Or are they too relegated to second class citizens. For that matter, how would he ever even interview a woman. With a chaperone? It means that female reporters, also, would be cut out of his information flow, now and in the past.”

So how do we get over the monumental hill of sexism in the workplace? As Elsesser told The Atlantic, it’s simple, just normalize it. “If you always saw men and women meeting together for dinner, people wouldn’t see it as suspicious,” she said.

Women today are still subjected to harsh criticism with their choice of fashion (even when it comes to something as innocuous as a prom dress), how their hair looks at any given time, or even how they simply exist in public. It’s up to leaders, leaders like the Vice President of the United States, to change this by accepting the fact that women deserve a seat at the literal and figurative dinner table. Trust me, the worst that’s going to happen is I eat your French fries. I promise, VP Pence, I am not here to get with you under the White House dining room table, I’m only here to change your views on women, our bodies, and our rights.