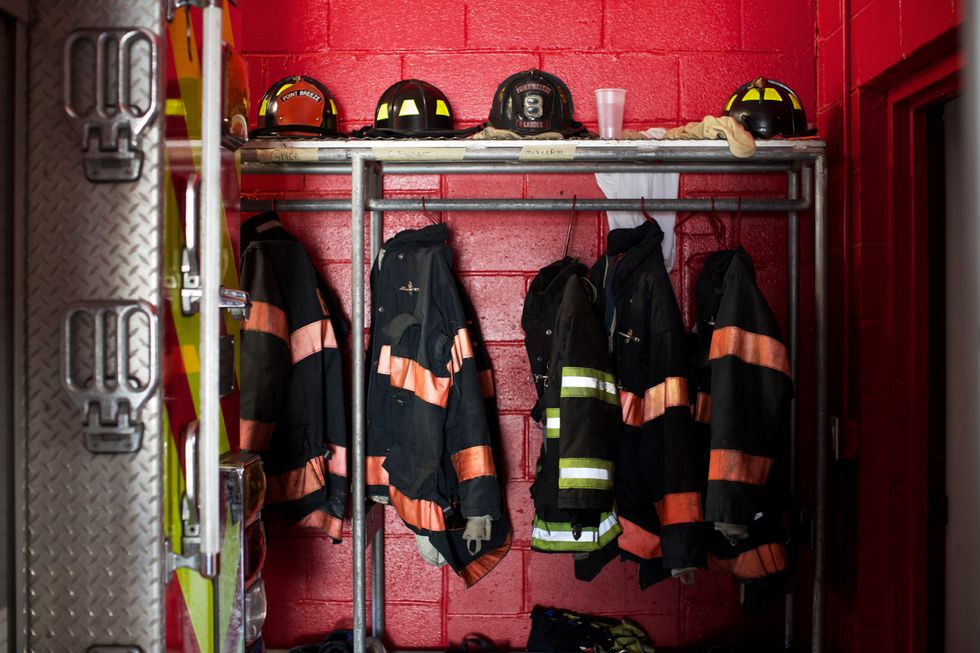 For 24-year-old Mike Scannell, a lieutenant at the Point Breeze Volunteer Fire Department in Breezy Point, NY, the desire to be a firefighter came to him after having spent years hanging around the firehouse with friends who were already involved. “What really helped me make the choice to be a volunteer firefighter was seeing the camaraderie of the members of Point Breeze, as well as knowing that I could learn skills that could be potentially life saving and that I could help the community,” Scannell says. In celebration of Fire Prevention Month, GOOD is partnering with Nest to share the personal stories of Point Breeze Volunteer Fire Department. Here, we take a closer look into the life of Lieutenant Mike Scannell; his firehouse, what motivated him to become a volunteer firefighter, and the daily struggles and triumphs of his profession.

Firefighters can spend upwards of 50 hours each week fighting fires, often pulling 10 to 14 hour shifts to ensure the safety of their communities, with the majority of the approximately 800,000 firefighters in the United States, like Scannell, serving as volunteers. The minority that do hold paid firefighting positions usually make between $24,000 - $45,000 per year. It’s a tiring, often unacknowledged position, but one that Scannell cherishes and takes incredibly seriously. “I don’t feel as though it is a job,” he says, referring to both volunteer and professional firefighting. “It truly is a calling, and being a firefighter is my calling.”

A native of Rockaway Beach, NY, a neighboring community to Breezy Point, Scannell emphasizes the kinship with his fellow firefighters at Point Breeze, six of whom share his same high school alma mater. “You will often hear firefighters call each other ‘brother,’ and think it’s just an affectionate term for a coworker or something to that effect,” he says, “but, to me, every single member of my firehouse is a brother.” This solidarity was particularly strong when Hurricane Sandy wreaked havoc on the Breezy Point community, as well as the Point Breeze firehouse. For months upon months following the natural disaster, Scannell remembers helping gut countless houses daily, even living at the firehouse so he and his brothers could be on hand to help community members with anything they needed. “I cannot remember a single complaint from any of our members involved in the recovery and rebuilding stages,” Scannell recalls. “Everyone wanted to be there, and that’s an extension of the familial bond that we have at the firehouse.”

For Scannell, the path to achieving his dream of joining the revered Fire Department of New York has not been without its obstacles. His attempts at the last FDNY test weren’t sufficient, but Scannell, who attends firefighting conventions to maintain and improve his skills and has participated in countless hours of classroom and hands on training at the Nassau Fire Service Academy, remains determined and looks forward to the next testing round. In the meantime, in addition to his duties at Point Breeze, Scannell works at an art-based afterschool program and summer camp, as well as a baseball umpire and bartender to make ends meet. While he entertains the idea of becoming a college professor or putting his Bachelor’s in physical education to direct use as a trainer/sports scientist serving athletes, Scannell holds tight to his ultimate goal of FDNY.

As Scannell’s love for being a firefighter has developed, so too has his drive to educate the greater community about fire safety. “Fire is a fact of life, and it will never be fully preventable, but by being educated on what can start a fire, you can save yourself and your family from a tragedy,” Scannell says. With almost two-thirds of home fire deaths in the United States occurring in homes without a smoke alarm (or with a faulty one), he's a staunch advocate of regularly checking the batteries on both smoke and carbon monoxide detectors. Always have a plan in the event of a fire, especially if you have children, and don’t overload circuits and unplug appliances when you aren’t using them.”

Currently in the midst of completing his Masters in exercise science at Brooklyn College, Scannell admits that it can be difficult to juggle his volunteer duties with all the other important pieces of his life—girlfriend, school, work, family, and friends—but makes sure the firehouse is always a priority, and leans on his brothers for support. “We take care of one another like family, we fight like a family does, and we love one another just like a family does,” Scannell insists. “It’s an amazing bond that develops quickly, and is unbreakable.”