Mom has the most hilarious response to her daughter's gay friend asking to sleep over.

The mother handled it fabulously. 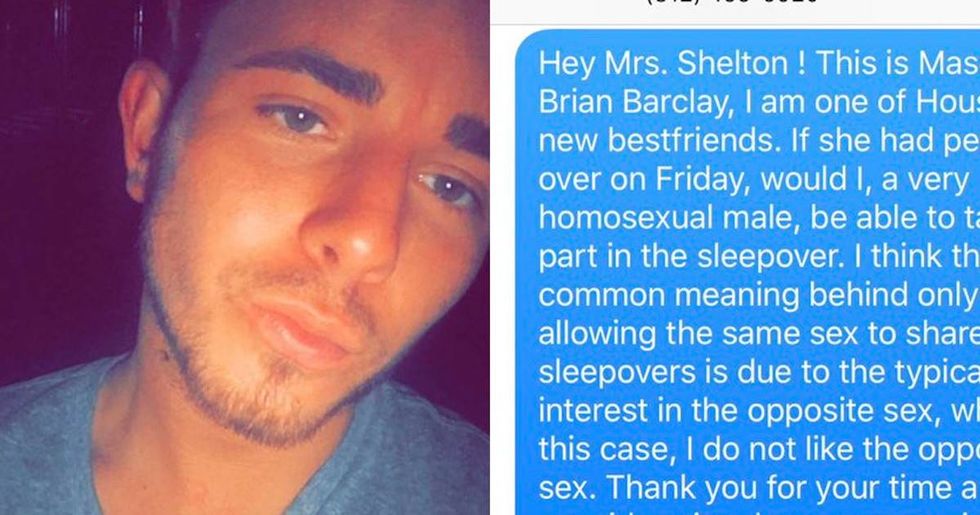 Meet Mason Brian Barclay, a teen and self-described “very homosexual male.” He recently wanted to attend a sleepover at his “new best friend” Houston’s house, because teens are gonna teen. But he’s a boy, and everyone knows boys aren’t allowed to attend girls’ sleepovers, because of cooties/patriarchal norms.

She hates this picture but idc. I'm in love with your soul. You pretty cute too. pic.twitter.com/YVL0GzrlcR

So he behaved more maturely than most adults, and crafted a long text message to Houston’s mom, Mrs. Shelton, in which he politely asked for permission to attend Houston’s sleepover.

“I think the common meaning behind only allowing the same sex to share sleepovers is due to the typical interest in the opposite sex, when, in this case, I do not like the opposite sex,” he explained in the text.

Mrs. Shelton’s response was so good that Mason tweeted it out and it went viral:

I TEXTED HOUSTONS MOM TO ASK IF I CAN STAY THE NIGHT FRIDAY HAHAHAHAHA pic.twitter.com/Ovr74V869W

“Hmm. Well my husband is hot. Should I worry?” she responded.

That took guts, and this mom acknowledged it *fabulously*! I wish you a fun night with your friends! Stay away from Houston's dad, now.

Literally just choked on my coffee from laughing about this. Best mom response ever

I think I'm in love with her mom

And others are just wondering if the sleepover is on, or not??

Wait. Did we ever learn the answer??? Lol

Others need to know if Houston’s dad lives up to the hype:

Wait, so how hot is her dad?

More importantly did you meet the dad?