The modest swimsuit style has been banned from numerous public pools. These women are fighting back. 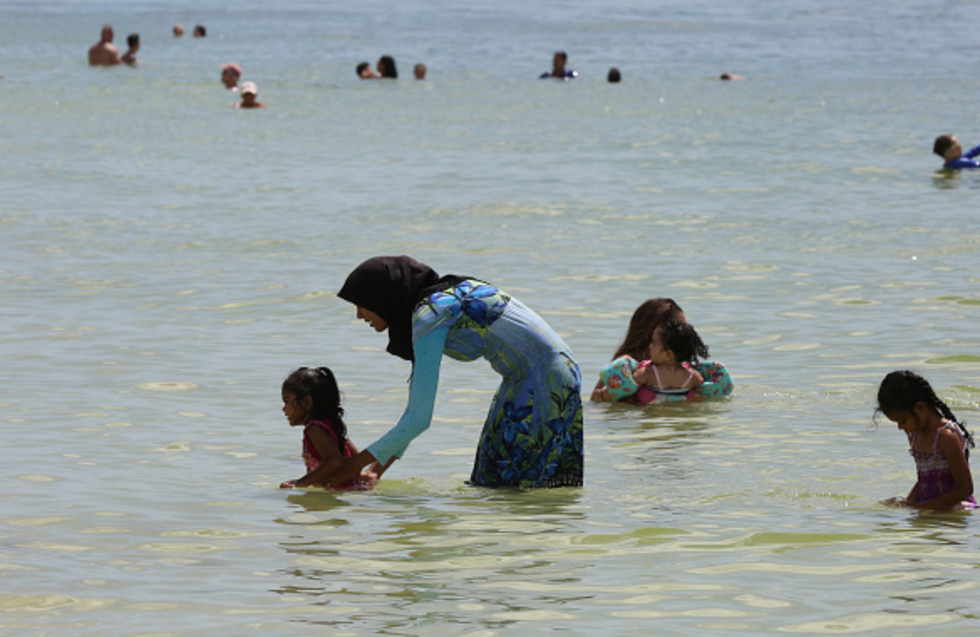 Inspired by the late American activist Rosa Parks, Muslim women in France staged a protest on Sunday, defending their right to wear whatever they choose to go swimming.

Seven Muslim women were cheered on by Muslim community members as they entered the Jean Bron swimming pool in Grenoble, along with 30 non-Muslim supporters, despite being told that their modest swimsuits — often referred to as burkinis — were not permitted. They soaked in the water for approximately one hour, as part of “Operation Burkini,” a demonstration organized by the Citizen Alliance of Grenoble to challenge the burkini ban.

The word “burkini” is a slang term used to refer to modest swimsuits worn by Muslim women. The garment, which reveals only women’s face, hands, and feet, allows them to take part in water activities while still maintaining a state of “hijab” and observing their faith as they choose.

While the traditional headscarf has come to be known as a "hijab," the word actually refers to the physical and internal characteristics of being "covered." "Hijab" itself means covering the body in accordance to Islamic guidelines, but also includes the way Muslims conduct themselves in public and interact with others. Muslim men are also expected to maintain internal and external "hijab."

“Operation Burkini” is part of a larger campaign to urge Grenoble’s mayor, Éric Piolle, to revise the public swimming pool dress code prohibiting burkinis, which was instated in 2016. The movement to overturn the rule started last year with a petition signed by 600 Muslim women.

"We have a dream: to have fun in public swimming pools like all other citizens, to accompany our children whenever they want to have a swim while it is very hot in the summer here in Grenoble,” two of the women, Hasiba and Latifa, told the BBC.

"We must fight against discriminatory policies and prejudice in France, as we are actually deprived of our civil rights of access to public services and city-owned infrastructures."

Police questioned each of the seven women after the protest and fined them each €35 ($40) for the dress code violation.

For many years, burkini bans and other similar bans on religious coverings have been widely debated. Many French officials like Matthieu Chamussy, a member of a political party known as “The Republicans,” have voiced their belief that the burkini represents the oppression of women under Islam’s tenets.

"Political Islam is moving forward step-by-step and the cause of women receding,” Chamussy tweeted.

French politicians have also argued that wearing burkinis is against the country’s strict code of secularism.

On Monday, National Rally leader Marine Le Pen tweeted in response to the protest, writing, "It's time to say loud and clear that the burkini has no place in France.”

In 2016, the burkini was banned in 15 French cities, before being overturned by the country’s top administrative court a few months later due to backlash. France was also the first European country to ban the full-face veil, worn by some Muslim women, in 2010. The country has prohibited the donning of the hijab and other religious symbols in public schools since 2004.

The United Nations, however, has been critical of France’s policies, categorizing them as intolerant, discriminatory violations of Muslim women’s human rights.