Woman with no qualifications tries to apply for nursing job, then completely loses her sh*t.

Having seven kids doesn’t automatically qualify you to be a nurse. 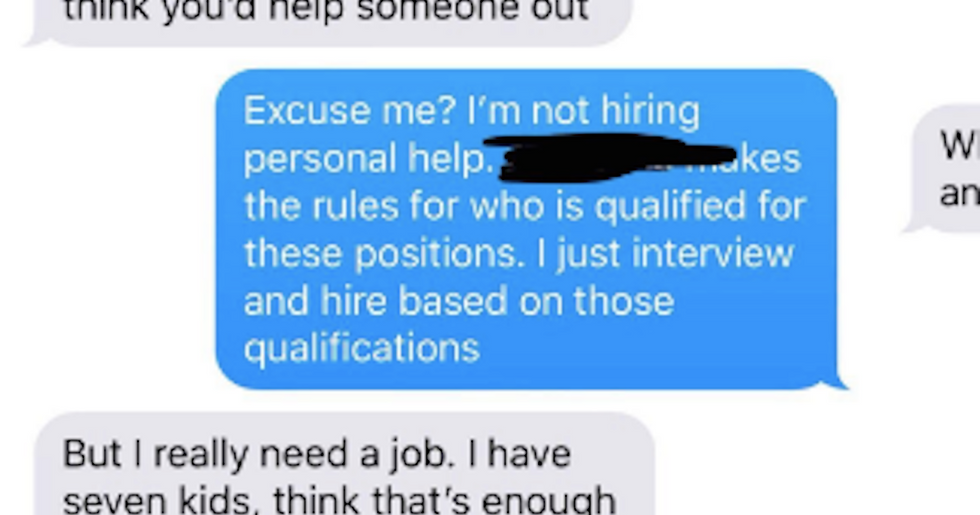 There’s a special kind of hellish people on this Earth who believe they are entitled to things. There’s even a subsection of Reddit called “Choosing Beggars” devoted to stories of scammers and other selfish people who think they can skip the line to get things they neither earned nor deserve.

This story from a nursing manager at a healthcare organization is a prime example of someone with a wildly out-of-control sense of entitlement. It involves a woman reaching out to an acquaintance she hadn’t spoken to “in years” about a nursing position that she’s extremely unqualified for.

Nursing is not an easy job—and requires years of schooling and experience, not to mention a high threshold for discomfort, which this woman clearly lacks.

Because when her acquaintance politely let her know that she lacked the qualifications to apply, she lost her freaking mind. She then insisted that being a mother of seven kids qualified her for the position (that’s not how nursing works), and demanded that her acquaintance vouch (aka lie) for her.

The nursing manager was not willing to “vouch” for her. Instead, they shared the text exchange online, so we can all watch this woman’s psychotic behavior unfold:

She clearly didn’t get this job. But with that level of self-entitlement and lack of qualifications, maybe she’ll get to be President of the United States someday.