The US Just Dropped The “Mother Of All Bombs” On Afghanistan

The intended target was an ISIS encampment 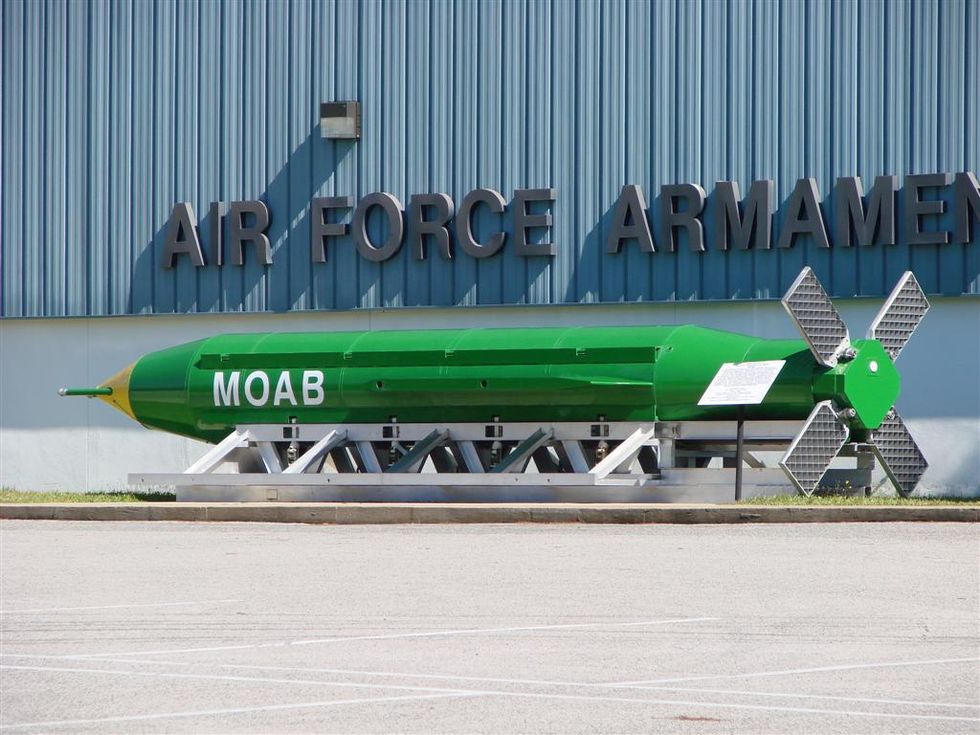 On Thursday, a spokesperson for the U.S. Department of Defense confirmed to reporters that the U.S. military had dropped a GBU-43 bomb on an area of eastern Afghanistan. The GBU-43 bomb is often referred to in the military by its nickname “MOAB,” or "mother of all bombs.” MOAB actually stands for massive ordinance air blast, according to The Guardian, and is the largest nonnuclear bomb in the U.S. arsenal.

According to How Stuff Works, the MOAB weighs in at 21,000 pounds, measures 30 feet in length, is considered a “smart bomb” for its GPS precision, and is an "air burst" weapon, meaning it explodes about 6 feet off the ground to increase its range of impact. Each bomb, according to the Los Angeles Times, costs nearly $16 million.

However, Hans Kristensen, director of the nuclear information project at the Federation of American Scientists, told NBC that the power of even the smallest nuclear weapon in the U.S. arsenal is "an order of magnitude" larger than the GBU-43.

“The strike was designed to minimize the risk to Afghan and U.S. Forces conducting clearing operations in the area while maximizing the destruction of ISIS-K fighters and facilities,” the Pentagon said in a statement. ISIS-K is the term for the Islamic State’s Afghanistan branch.

According to CBS News’ David Martin, the strike in Afghanistan had been in the works for a number of months. “The weapon was brought into Afghanistan specifically for this mission,” CBS reported, to help destroy underground tunnels used by the terror network.

"As ISIS-K's losses have mounted, they are using IEDs (improvised explosive devices), bunkers and tunnels to thicken their defense," Gen. John W. Nicholson, the commander of U.S. forces in Afghanistan, said in a statement. "This is the right munition to reduce these obstacles and maintain the momentum of our offensive against ISIS-K."

The military said the U.S. “took every precaution to avoid civilian casualties with this strike,” however the same cannot be said for all recent U.S. military action. The Pentagon admitted that on Tuesday a U.S.-led coalition accidentally bombed friendly Syrian forces fighting the Islamic State in northern Syria, killing 18.

A source told The Guardian that President Donald Trump may have authorized the use of the bomb dropped in Afghanistan, but that his signature is not needed to release the bomb, and no official confirmation has come of the president’s level of involvement, but that isn’t stopping people from attributing this strike to Trump’s ego. “This is a big league weapon for a small league enemy,” Rob Crilly wrote for The Telegraph.
So far there is no record of the number of casualties in the bomb’s aftermath.
Trending Topics
THE DAILY GOOD
Start your day with something GOOD.
Trending Stories