New York City’s mayor has just announced the city will guarantee health care to all residents by 2021.

“Health care isn’t just a right in theory, it must be a right in practice.” 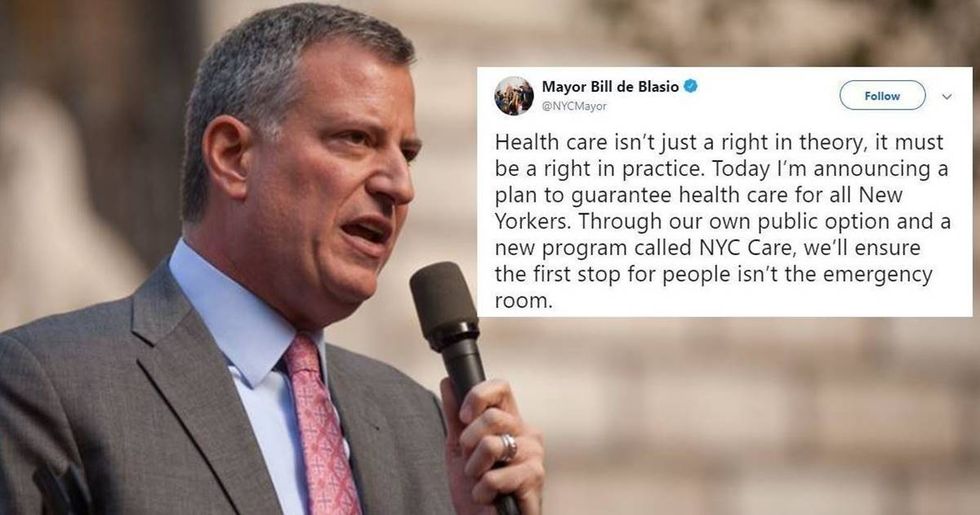 Since the passing of the Affordable Care Act (aka “Obamacare”) in 2010, the state of New York has seen a decrease in its uninsured population by more than half.

New York City, with a population of 8.6 million, has more than 6000,000 residents that remain uninsured, so city officials have created a landmark plan to reduce that number to zero.

Mayor Bill de Blasio made a surprise announcement on Tuesday, January 8, saying the city will soon guarantee comprehensive health care to every single resident regardless of their ability to pay or immigration status.

Health care isn’t just a right in theory, it must be a right in practice. Today I’m announcing a plan to guarantee health care for all New Yorkers. Through our own public option and a new program called NYC Care, we’ll ensure the first stop for people isn’t the emergency room.

The plan isn’t an individual insurance plan or a single-payer health program such as the Medicare for All plan touted by progressives. Instead, the city plans to expand its current MetroPlus public insurance plan while adding a new program called NYC Care.

Through the combination of these programs, uninsured residents will gain free or affordable access to primary and secondary providers from pediatrics to OBGYN, geriatric, mental health, and other services.

“When this plan is fully implemented every New Yorker who needs a doctor will have an actual doctor with a name and a place, they’re going to have a card that will empower them to go to that doctor whenever they need,” de Blasio said. “A primary care doctor, an actual person that you can turn to that’s your doctor, and the specialty services that will make all the difference.”

The programs will cost the city an estimated $100 million a year to operate. However, de Blasio believes it will ultimately save the city money by drastically reducing residents’ trips to the emergency room.

NYC Care is set to begin in the Bronx this summer and will roll out to the rest of the boroughs by 2021.

New York City’s bold new healthcare program will be the biggest and most comprehensive health coverage program in the country. “This has never been done in the country in a comprehensive way,” de Blasio told MSNBC. “Health care isn’t just a right in theory, it must be a right in practice. And we're doing that here in this city.”

Here’s what people are saying about the stunning announcement.

We have to start somewhere. Big change starts small. We just have to keep working at it!

Healthcare-for-all provides coverage for all, reduces the burden on small businesses to offer and pay for health coverage, addresses the business myth that it's cost prohibitive to hire certain workers because their health coverage is too expensive. A win-win.

I stand with @NYCMayor de Blasio today in declaring health care is a right for all, not a privilege for only those who can afford care. Expanding access to care is a key step in eliminating health disparities in New York City.https://t.co/LVVoq2M4IG

And yes it is.

Not everyone is a huge fan.

How about the Mayor of New York City take care of the people that was born here, like the ones that are sleeping on our streets. Finding them homes, health care, food etc. help them first.

Not only will New York be a sanctuary city, Mayor de Blasio will now seek $100 million in new spending to provide full comprehensive healthcare for all, including its undocumented immigrants.

Rest assured, NYC residents will be paying for this somehow.https://t.co/ZfECceBBOj