A Florida 1st grader is collecting PB&J jars to make sure her classmates have enough to eat.

She may be little, but she’s on a big mission to end hunger. 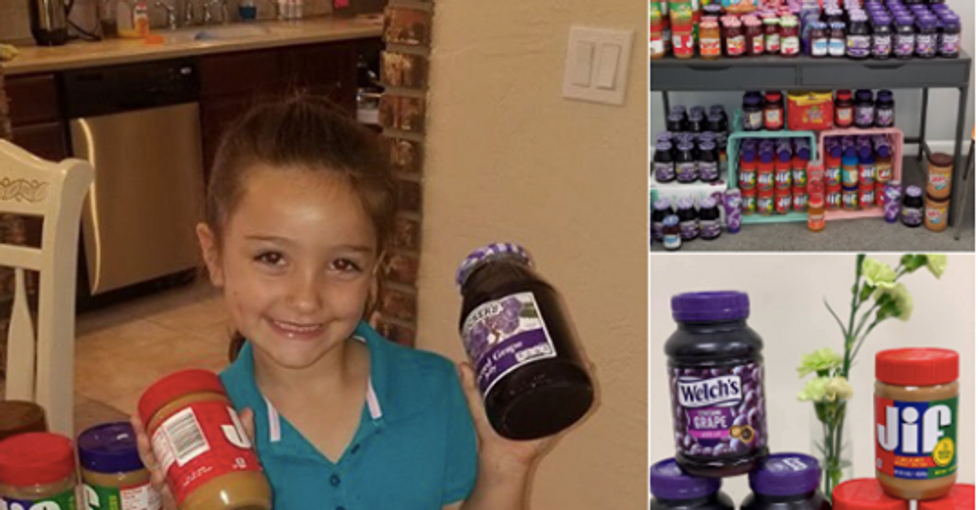 Eva Chapman sensed that one of her classmates at Spruce Creek Elementary School in Port Orange, Florida, might struggle with hunger at home.

So she told her mom that she wanted to start a food drive to help the girl and others in similar situations get enough food to eat, according to ABC News.

Her goal? To collect 10 million jars of peanut and jelly.

Since the drive started in April, Chapman is well on the way to her goal — she’s collected 1,033 jars of peanut butter and jelly to date and with the increased publicity her story has received, that number will likely keep rising.

Chapman’s generosity has spurred other PB&J drives in the neighboring area and has attracted donations from people around the country.

"Other parents, other students, other schools, and even [in] other districts, I'm hearing, students are following her lead and wanting to impact other students in a positive way and make sure that no kids go hungry over the summer break," Andrea Hall, the principal of Spruce Creek, told ABC News.

Chapman and her mom have packaged up the jars and sent them to food pantries, including a new one that began in her own school.

Her story and budding activism highlight the widespread hunger that occurs in the United States, and the rampant inequality that makes such an injustice possible.

An estimated 41 million people throughout the US have trouble getting the food they need and regularly go hungry.

That includes more than 12 million children who live in food insecure homes. A nutritious diet is essential to a child’s development and makes it possible for a student to flourish in school. Children who go through their classes hungry often struggle to pay attention, stay awake, retain and information. Lack of food ultimately impacts school performance and can prevent a student from reaching their full potential later in life. Because most parents work during the the daytime, millions of children experience a surge in hunger during summer break when they can no longer rely on the regularity of school meals.

Hunger doesn’t just affect students in primary and secondary school. In fact, nearly half of college students report skipping meals because of a lack of money, even as they take on huge amounts of debt to pay for tuition and living expenses.

Schools throughout the US have become unlikely battlegrounds in the fight for food justice. Recently, a cafeteria worker was fired for giving a student who didn’t have money a hot meal.

Countless other schools regularly punish and humiliate kids for not paying their school lunch tabs, even though their families are unable to afford the costs.

These incidents have sparked a backlash, with advocates arguing that no student should have to go hungry, especially when it impacts learning so much. In cities like New York, where the government voted to make all school lunch free, this argument is winning out.

Even though she’s just 6 years old, Chapman is working toward that goal in Florida.

"It's quantifiable to her at this young age when she sees all the jars come and go from our house, from my office," Chapman’s mom told ABC News. "She can feel that sense of pride and accomplishment and I think more than anything else, she's happy that she was able to help other kids."