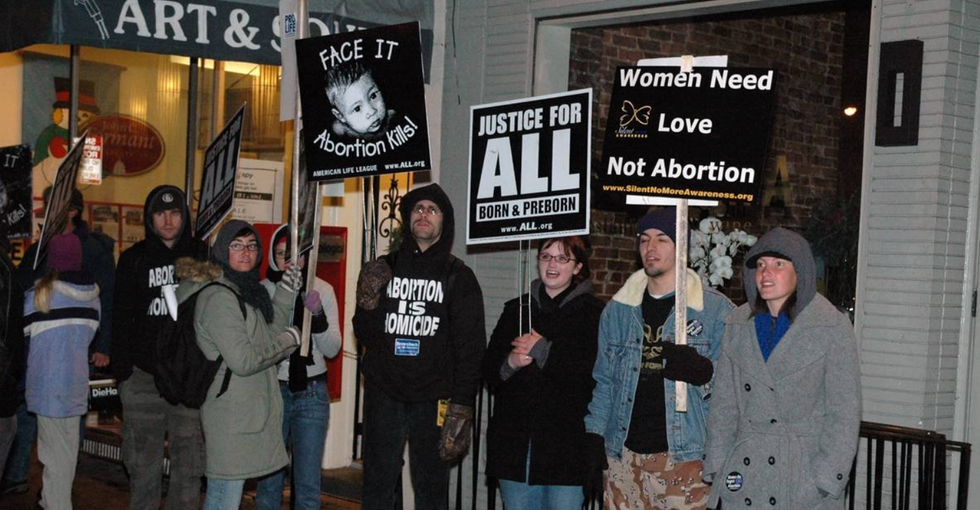 When pro-lifers picket Planned Parenthood clinics they often do so holding signs that have disturbing pictures of aborted fetuses. They do so in hopes that pro-life people will be forced to change their opinion on abortion after being confronted by the grisly images.

However, these protesters are only showing half the story.

On the other end of the abortion equation are the women put in harm’s way by laws that restrict their access to the procedure. According to the Guttmacher Institue, over 30,000 women die each year from botched abortions in countries where the practice is forbidden and 45% of all abortions performed worldwide are done so in unsafe conditions.

When abortion is looked at from the macro level it’s tough to say which side is more “pro-life.”

A Trumblr user named stfuantichoicers perfectly illustrated this point when a pro-life activist asked pro-choice people on the forum to Google abortion pictures and see if they could still hold the same position on the issue. “Do it, I dare you. Abortion is WRONG,” the activist wrote. “Pass it on pro-lifers.”

Here’s what comes up in the first frame of Google Images:

Several political cartoons (both pro-and anti-choice) [Link hs since been deleted]
This infographic about the dangers of unsafe abortion in countries where it is illegal
This BAMF [Link has since been deleted]
2 images that could possibly be of an actual first trimester abortion (90% of all abortions).
6 images that are of late-term abortions (<2% of all abortions), which are only legal in cases to preserve the woman’s life/health or in cases of severe fetal abnormality.
I’m still pro-choice.

Now it’s your turn. Google for “back alley abortion.” But don’t click on images this time- I want you to form an informed opinion based on facts.

Click the second link. It’s an article that cites a peer-reviewed source, confirming what you just read on Wikipedia.

Click the third link. It’s the recollection of a woman who had a pre-Roe back-alley abortion. It’s horrific, and she was one of the lucky ones.

Are you satisfied, or did you bother reading at all? Ok, go ahead and click images. That second picture is of Geraldine Santoro’s lifeless body. (Trigger warning for images in that article). She died when she attempted to induce abortion in the fear that her estranged husband would murder her for being pregnant with another man. She hemorrhaged to death, alone in a seedy motel room. She left behind two daughters to be raised by their abusive father.

So what about now? Are you pro-choice, or are you still clinging to the ideological dogma of sacrificing real, breathing, feeling women for unconscious, unfeeling fetuses? Which of us is truly “anti-life?”

Stfuantichoicers does a fantastic job at reframing the argument so that no one in the debate can really claim to be more pro-life than the other. Is it really “pro-life” to pave the way for the deaths of tens of thousands of women each year to protect fetal tissue?

Pro-life people may claim their position has the moral high ground because of late-term abortions, but those are incredibly rare and only happen if the mother’s life is in danger. In this case, the pro-lifer is stepping in and asking the state to choose the life of the unborn child over its mother’s. Shouldn’t that be the doctor’s decision?

The post has recently gone viral on the Reddit r/MurderedByWords subforum where it’s had some great responses.

“Also just like... I don’t want to see pics of back surgeries either. I still support access to them,” — NoahWilzon

“What, it’s almost like something isn’t immoral simply because it’s gross!? Weird. These people need better arguments, this one is a joke.” — Smgth

“A lot of conservatives are driven by fear and disgust, and that’s what drives their political decision making,” — perfeptionactionproof

(Which is true, according to this article published by GOOD.)

“The same people that are anti-abortion are generally the same people that are pro-war when the time comes. If they would see the actual results of war, and not just reporters in khaki-pocket vests, would that change their minds? Of course not. Because it’s never, ever been about the gore or loss of life to these people,” — Val_Hallen